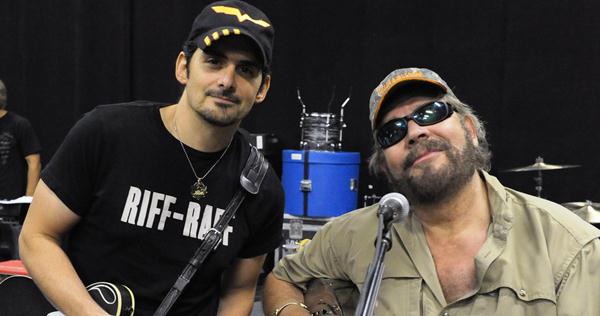 In an unprecedented pairing of two country music superstars, Hank Williams, Jr. and Brad Paisley wowed a national television audience performing their duet, “I’m Gonna Get Drunk and Play Hank Williams” on tonight’s CMT Awards.  Hank and Brad performed to a crowd of approximately 30,000 on the streets of downtown Nashville.

“Tonight was a special night!  Having Brad perform with me and especially on my new album is something special,” Williams said.  “It’s a good ‘ole honky-tonk song that Brad-cephus and Bocephus had a lot of fun playing tonight!”

“I count as one of my greatest blessings in this career being able to get to know Hank,” Paisley said.  “When I heard the song, I said, ‘This is perfect’.  It’s such a great tribute to his dad.  The idea that two of us from this generation are getting together to forget a woman with the music of his father is too much fun!  It’s a highlight for me!”

It is his first album on his new label imprint, Bocephus Records, which is licensed by Blaster Records under a Warner Music Nashville distribution deal.

Uncategorized Comments Off on Two Country Superstars Having Fun On National TV Print this News
NBRN.FM Premier’s Top30 Chart Saturday at 3:30pm (Newer)
(Older) Bradford Files: Make Me A Star In Your Own Time