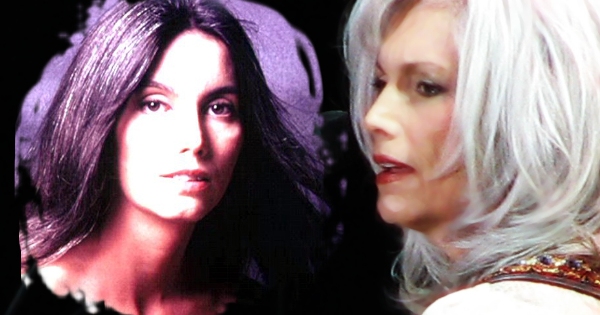 “I’ve played a lot of different places,” said Emmylou Harris including a 99-year-old building, where worries about hazards, were such that sitting in or underneath the balcony was disallowed.

. “This is the best.” A rubbly relic, where spotlights revealed asthma-enhancing debris. “Is this a great place to sort of feel the hillbilly dust?” asked Harris. Sure. See it, feel it, and good luck getting it out of your hair. But thank goodness for Pollyanna. Twenty-one years ago, Harris fronted a remarkable acoustic band she called The Nash Ramblers at a no-longer-remarkable, partially condemned building, where they made a live album.

Yes, the building was called the Ryman Auditorium. But, no, it wasn’t historically cool. It was just historical. It was the former longtime home of the Grand Ole Opry. Perhaps your grandma used to be Miss America. That was a long, long time ago. Anyway, back to the “thank goodness for Pollyanna” part. The resulting album, At the Ryman, pointed attention to a building that hadn’t hosted a public performance since 1974, when the Opry left for the modern amenities (Air conditioning! Dressing rooms!) of the Grand Ole Opry House out by Briley Parkway. The album came out in January of 1992, the same month Harris became the 70th official member of the Opry.

“That album was the tipping point for getting the Ryman refurbished and making it a proud venue again,” said Richard Bennett, who co- produced (with Allen Reynolds) At the Ryman. “It brought the name ‘Ryman’ back to the rest of America.”

At the time, much of the rest of America would have been skittish about visiting the Ryman and its Lower Broadway neighbors after dark. “Lower Broad was Tootsie’s, a few beer joints, the Ernest Tubb Record Shop and a lot of adult bookstores,” says Steve Buchanan, Gaylord Entertainment’s Grand Ole Opry Group president. Back in 1991, Buchanan was in charge of marketing the Opry and the Ryman, and he was instrumental in green-lighting Harris’ and the Ramblers’ performance there. Buchanan’s efforts to market the Ryman were emboldened by Gaylord President and CEO Bud Wendell, who was insistent that the Ryman was an essential and irreplaceable building. “The album came out in January of 1992, and we announced the renovation of the Ryman in March of 1993,” Buchanan says. “I think Emmylou was instrumental in multiple ways, and that album served to connect the dots and to introduce the Ryman to a whole new generation of fans.” I was among those fans. And though I’d heard of the Ryman, I thought of it as the place where the Opry used to be, before the show moved out to the suburbs and downtown became a wasteland. But here was Emmylou Harris, arbiter of country cool, saying this was a place of worth, of importance. Soon, folks began speaking of it as “The Mother Church of Country Music,” and the Ryman became the most elegant of downtown attractions.

The renovation of the Ryman, the building of the Arena Formerly Known as Several Things and Currently Known as Bridgestone, and the Convention Center Currently Known as the One We’re Replacing became cornerstones of a new downtown. In conjunction with the street-level musical revival spearheaded by BR-549,Greg Garing, Tim Carroll and others, those buildings gave us a remixed, remastered city, where you’ll need either good running shoes, a car or cab fare to get to an adult bookstore from the corner of Fifth and Broadway. And one where it made perfect sense to build new-century jewels like the Country Music Hall of Fame and Museum and Schermerhorn Symphony Center. “We were looking at different places to do a live album that would feature songs I hadn’t recorded before, and (music executive) Bonnie Garner suggested the Ryman,” Harris says. “It was a great chance to perform in a building that was so steeped in history.”

Family reunion By the early 1990s, Harris had already done much to honor that history, and to alter it. She had recordedLouvin Brothers songs at a time when the Louvin catalog was out-of-print, and she had honored Kitty Wells,Loretta Lynn and others with heartfelt covers. She’d also shone a mainstream light on Rodney Crowell, Vince Gill, Tony Brown, Barry Tashian, Steve Fishell and many others who are now Nashville mainstays. During her early solo career, she was based in California, but she’d moved to Nashville in 1982, and a decade later she was ready to commit to regular Opry appearances. On Jan. 25, 1992, she joined the Opry. “I wish I could remember more about it,” she says, though she remembers practically nothing. Significant emotion tends to make folks either recall the detailed entirety of an occasion or lump the whole thing into mush. With Harris, it’s mush. Beloved mush, but mush nonetheless. Fortunately, these things are preserved for posterity. The night of her induction, Harris was interviewed backstage by Bill Anderson (they’re both Country Music Hall of Famers now). “Musically and philosophically, I feel like you’ve been here for years,” Anderson said, whereupon Harris credited her musical path to the guidance of Gram Parsons, who helped immerse her in country music in the early 1970s. Then, Anderson asked her about “hillbilly dust.” “It’s a way of describing the feeling you get when you walk into the old Ryman building,” she explained. “It comes from those many, many nights of all those waltzes and shuffles being played, and all those people having their hearts touched by the music.” These days, the Opry is held at the Ryman during winter months. And the Ryman is a favorite venue of Neil Young, Elvis Costello, Gillian Welch, Coldplay and many others. All that is thanks in no small part to Harris, who championed the Ryman at a time when others scuffled past on their way to the bookstore. “Meet me at the wrecking ball,” she sang on a 1995 album that helped her to a place as the godmother of what we now call “Americana” music. But in 1991, Harris did all she could to save the Ryman from what seemed like an inevitable wrecking ball. And a year later, just before she sang bluegrass classic “Walls of Time” and Loretta Lynn’s 1965 hit, “Blue Kentucky Girl,” King of Country Music Roy Acuff introduced her as a member of the Grand Ole Opry. “I feel like I’ve come home to a family I didn’t even know I was a part of,” she said upon her induction. In the ensuing years, she’s come to understand that she’s an integral part of that family. Saturday night, she’ll be back at the Opry, back on the Ryman stage, for another reunion. The audience will applaud her, and she’ll likely reply, “Thank you.” Really, she should be saying, “You’re welcome.”

If You Go to The: Celebration of Emmylou Harris’ 20th anniversary as a Grand Ole Opry member, with Harris, Vince Gill, Rodney Crowell, Shawn Colvin and many more.

This article supplied by Marty Martel