New Country Artists To Watch Out For In 2020 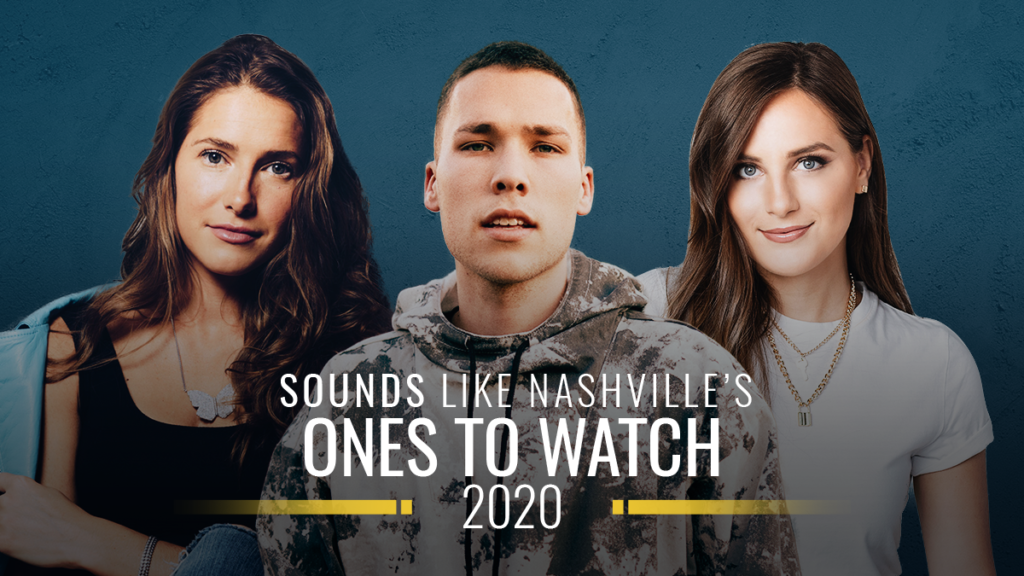 New Country Artists To Watch In 2020

Keep your eyes on these budding stars to be…

2019 saw a batch of amazing artists hit the country mainstream, many of which were featured on our 19 New Country Artists to Watch in 2019. But now, we’re back with a complete list to keep your playlists full of Nashville’s brightest new performers.

Country’s newest all-female trio instantly grabs one’s ear with their engaging melodies and harmonies. The Gen Z group of Sami Bearden, Savana Santos and Sam Backoff recently made their way on to the country scene and are already garnering attention with such charmers as “Delight” and “Ruin That For Me,” while their animated personalities that pour through on screen are enough to uplift your spirits. But the feminist edge of “Be a Bro” and lyrics like “If you hold a sister down / It’ll all come back around / So be a bro / Know the girl code,” prove that they’re the future of country music. – Cillea Houghton

Though there’s a smooth charm in Bandi’s voice like that of a member of your favorite boy band, he balances this vocal ability with the sensitivity he pours into his music. This gives his songwriting an intriguing effect, as demonstrated by the way he vulnerably lets his guard down on tracks like “Man Enough Now” and “Why I Don’t Drink.” “Cause I know what I feel ain’t love / Only time I open up / Is when I’m drunk / Standing at your door,” he croons on the latter, yet is just as smooth and suave on such grooves as “Rain Man” and “Only One.” With his open-hearted nature, Bandi is sure to swoon listeners as his collection grows along with his talent. – C.H.

There’s a cinematic element to Blair’s music that makes it so enticing. The Missouri native brings a pop flair to her compositions while unveiling the insecurities and mistakes that come with being a 20-something. Love affairs that are in a gray area and going back to someone you know you shouldn’t are just some of the topics she tackles honestly in her songwriting. But if you really want to hear her vulnerability, turn to “Gotta Quit Drinkin.” With a dreamy voice that she utilizes with precision, Blair is one of Nashville’s most dynamic young artists. – C.H.

Before he was runner-up on the country music competition show Real Country in 2018, Fleet had already won over fans in Willie Nelson and Jake Owen with his undeniable voice. The Chattanooga-based singer who mellifluously blends blues and country impressed Owen so much during his performance at a mutual friend’s party that the hit maker offered him an opening slot on his tour, eventually landing him a guest spot opening for Nelson. With a rugged, but comforting voice and lyrics that touch on blue collar life, Fleet is always speaking to the common man in a way that’s artistic, yet relatable. – C.H.

With just one hit of Frey’s voice, you’d think she’d been transported from the 90s era of country music, as she’s quipped with a voice that’s as crisp and nostalgic as power women like Faith Hill and Trisha Yearwood. Frey carries this sense of timelessness into songs like “One Night in Tulsa” that reflect the storytelling of the 90s country era that makes it so beloved, using images of walking through the scorching hot desert and riding a buck wild mustang bare back to convey the pain of longing, while songs like “Too Bad” draw one in with their pure, traditional country identity. With this unbeatable combination, Frey is sure to continue to attract fans in the new year. – C.H.

With a voice that’s soulful and distinctive, it’s no wonder Gates landed a coveted slot during season 12 of The Voice on Gwen Stefani’s team. Gates originally launched his career as former frontman of Rhode Island-turned-Nashville-based pop rock band Runaway Saints, but has since struck out on his own with an intoxicating voice and sophisticated songwriting palette. You hear this on such vulnerable tracks as “Dive Bar,” “Bandit” and “Brooklyn Nights” that put the listener at the center of his heartache. With an impressive resume and bold voice serving as his aces in the deck, look for Gates’ star power to rise in 2020. – C.H.

Jones’ bubbly charisma shines through across her dynamic body of work. Her infectious smile matches that of such catchy numbers as “Chasin’ Me” and “The Difference,” while her endearing flair has won over fans across the musical spectrum. She was hand picked to open for the likes of Zac Brown Band, Kenny Chesney and Jimmy Buffett, the latter of whom believes in her so much that he gave her a distribution deal with his Mailboat Records and personally penned the breezy “Gulf Coast Girl” for her. Watch for Jones to break through the mainstream country ceiling in 2020. – C.H.

Between her unique voice and emotive songwriting, it’s easy to see why Kozak was selected as the flagship artist to Nashville’s first all-female label, Songs & Daughters, helmed by songwriting pioneer Nicolle Galyon. The Ontario native has a voice that glows and a songwriting capability that resonates, particularly with her debut single “First Last Name.” The touching number that serves as a Father’s Day gift to the man who inspired her love for country music is a potent example of Kozak’s talent demands your attention. – C.H.

With a bright, effervescent vocal and a talent for exposing the connective tissue of the soul, Kalsey Kulyk wraps emotional depth in an optimistic-roots package. The Saskatchewan native scored an early believer in one of Fleetwood Mac’s original producers, and it’s easy to hear on her self-titled debut album – full of thick vocal stacks and deceptively sophisticated arrangements. – Chris Parton

One listen to a song from Trea Landon’s catalogue and you know he’s unabashedly country. Built on a foundation of laid back country melodies and equally carefree lyrics, the Georgian picks up where Easton Corbin left off with tracks like “Loved By A Country Boy” and “Get The Girl” that portray him as a southern gentleman at heart. Sweet and simple are two of the qualities Landon conveys melodically and lyrically, particularly as he proclaims “you ain’t been loved ‘til you’ve been loved by a country boy” in his easy going debut single. The welcoming nature of this rising star is sure to entice fans in the new year. – C.H.

Parker McCollum spent years grinding show-to-show in Texas’ independent scene, building himself a dedicated following on a youthful wave of self-penned country rockers … but recently he’s made a play at the mainstream. His latest major label release is the reflective midtempo “Pretty Heart,” which mixes a loose-fitting vocal with a Lone Star-sized dose of regret and distorted slide guitars. – C.P.

As the son of Suzanne Cox, member of the Grammy winning bluegrass band The Cox Family, Ratcliff literally has music in blood. Though he’s merely 24-years-old, Ratcliff’s songwriting ability proves he posses maturity beyond his age. He demonstrates this with tracks like the bluesy “See Me Like This” that has an edge without being bitter while debut single “Rules of Breaking Up” shows off his emotional side. Watch for this talented musician to continue to flourish in 2020. – C.H.

Pairing up with power songwriters Shane McAnally, Josh Osborne and Matt McGinn, Robb’s growing catalogue proves him to be a modern writer with a serene voice. His McAnally and Osborne-penned second single “Really Shouldn’t Drink Around You” is a breezy bop that invites one into Robb’s talent that is bound to only grow in the new year. With a voice that calls to mind Dustin Lynch and a songwriting style that reflects the modern country landscape Robb has solidified himself as one of the genre’s promising new acts. – C.H.

Sometimes one song is all it takes to launch a career, and that is happily the case with Matt Stell. The chill-bump raising “Prayed for You” turned into a wish fulfilled this year, showcasing his smoky vocal and a sense of poetic romance to become his first No.1 at country radio, while also pulling in north of 40 million Spotify streams. He’s doubling down with the Everywhere But On EP. – C.P.

White can write and deliver a pop-country hit with the best of them (see the undeniably catchy modern relationship bop “If You’re In It”), but it’s the unflinchingly honest ballads that truly allow her to shine. Though White’s career is only destined to soar, it’s a safe bet that “Ten Year Town” will always stand as one of her best. The painstakingly outspoken guitar ballad that speaks of selling one’s soul and wondering if they have what it takes to make it as an artist are just two of the raw confessions she makes in the song that gives listener a no-holds-barred explanation of how the music business operates. This is just one example of the vulnerability that White brings to her songwriting, making her one of the best rising stars Nashville has to offer. – C.H.

Hailey Whitters broke out in 2019 after capturing the struggle to do just that in “Ten Year Town,” a striking diary entry any down-on-their-luck-dreamer could relate to. With an organic ‘90s sound and a knack for insightful lyrics, her work finally paid off, grabbing attention on tours with Maren Morris and Little Big Town. Next year includes a full album and tours with Tanya Tucker and Jordan Davis. – C.P.

The Williams family tradition continues through Sam Williams, son of Hank Jr. and grandson to the iconic Hank Sr. But like the generations before him, this Williams follows his own artistic arrow – even when he’s covering his elders. With the single “Weatherman,” he puts a lonesome howl of a vocal on his father’s 1981 ballad, and often veers into spacey experimentalism on tracks like “Gemini.” – C.P.

The small town Louisiana native is proud of her roots, as demonstrated by her new album Redneck Hollywood that’s filled with such gems as “Workin’ Ovetime” and “LA” and showcase her sound that’s an alluring mix of smoky and sultry. The young star has a strong strain of confidence she carries into other songs like “Things a Man Oughta Know” and the ode to her favorite brazen gesture, “Middle Finger,” yet displays this confidence in a poignant way on “Tougher.” With her thoughtful songs and eclectic style that calls back to the 70s, Wilson is a name you need to keep an eye on. – C.H.

Country Music Comments Off on New Country Artists To Watch Out For In 2020 Print this News
Jack Blanchard: Nothing Is Over Like Christmas (Newer)
(Older) Sleepy LaBeef Dies At Home December 26, 2019