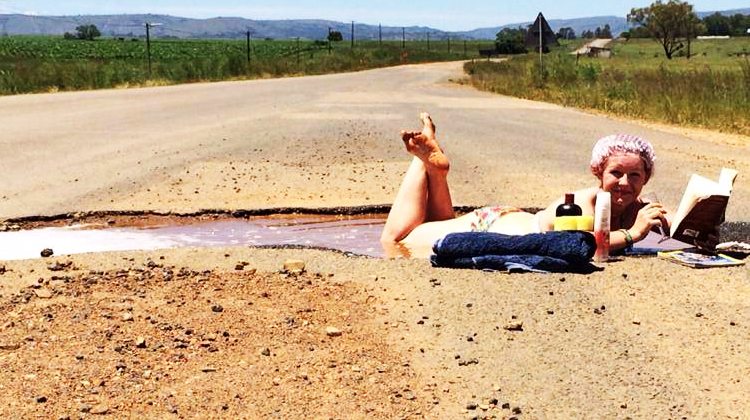 Johannesburg – Social media was abuzz following the story about a woman who decided to prove a point and take a bath in one of the potholes last week, a Sapa correspondent reported.
The story made front-page headlines over the weekend.

Lydenburg Guest Farm owner Alison Botha and volunteer teacher Rosie Morrison recently published photos of Morrison taking a bath in one of the potholes on the R36.
Morrison was armed with a shower cap, book, glass of wine, and shampoo.
The two women posted the photos on Facebook and encouraged people to spread the message that government had to fix potholes that threatened the lives of tourists and locals.
“This specific road, the R36 between Machadodorp and Mashishing, has been unusable for years now and it’s mainly because there are 40-ton trucks that make use of the road every day due to a lack of railway structure. It is the responsibility of government to fix this road,” said Botha.
Botha said she used to take guests out on horse trails, but the road had become so damaged that neither her horses nor vehicles could use it.
“It’s simply too dangerous,” said Botha.
Damage caused by trucks
The Mpumalanga transport department has blamed the deterioration of the R36 between Machadodorp and Mashishing (formerly Lydenburg) in Mpumalanga on heavy trucks and rain.
“Much maintenance has been done on the road, but the large number of heavy trucks from various mines that use the road have contributed to the deterioration of the road,” department spokesperson Dumisani Malamule said.
“The road has now deteriorated to the point where patching is not a feasible option anymore, but rehabilitation is required.”
Malamule said the rehabilitation would be done in the 2014/15 financial year, adding that government would make every effort to ensure the road was rehabilitated.
“As we are approaching the end of the current financial year, all efforts are being made to ensure that rehabilitation of the road is done in the 2014/15 financial year. The MEC will pronounce the plans for