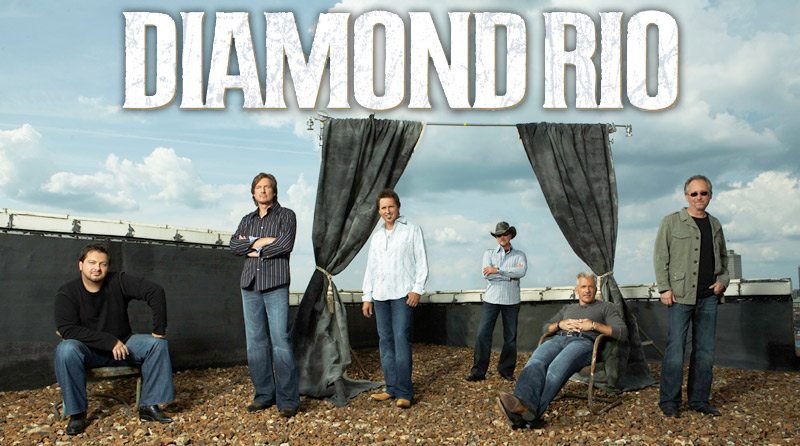 DIAMOND RIO – RESTLESS HEART – THE ORIGINAL MEMBERS OF EACH GROUP

This past Friday, August 9th, in Lancaster, PA at the American Music Theatre, I witnessed two of the best entertainment shows that I have seen in many, many years.  First of all there were no problems, no ego’s back stage, and no demanding management teams.  Just plain camaraderie with old friend.  And when it comes to harmony, believe me when I say it was awesome.  Remember that old saying “Beauty is in the eyes of the Beholder,” well on stage this night “Harmony is in the ears of the Beholder.”  DR & RH put on an exhibition of what true harmony should sound like and it was truly some of the greatest I have ever heard, if not the very best of the best.
The day started off a little scary when Diamond Rio’s bus stopped running about 80 miles from Lancaster, PA.  They had a service man come out and fix the problem, and they told us they should be there in about an hour.  Sure enough there pulled and the production staff who were already set up for DR loaded in their equipment, set it up, and begin running cords and duct tape to all of the amps and instruments.  Restless Heart were already in the building waiting their turn to set up, sound check and get ready for the show.  No one got frustrated, everyone worked like busy bee’s and by 600PM we were ready for the 8PM show.  These two groups know each other very well, so it was a pleasure not to see or hear anyone getting out of hand because of the late set up times, which in all fairness, there were really no late times.  TWO SUPER GROUPS IN ALL WAYS.
The people that travel and work with both of these groups know their jobs and made sure that when the band members arrived for their sound check, everything would be in order.  Remember, the original members of both Diamond Rio and Restless Heart were on this show.  It was clockwork, and “Git Ur Dun” boys, and that is exactly what they did.

Restless Heart opened the show and proceeded to sing hit after hit after hit for 60 minutes of exciting and professional entertainment geared towards their fans.  Larry Stewart still sings his butt off and the 5 part harmony was absolutely phenomenal from the first note they sang until the last.  Their show was set to the tempo of them having fun on stage and making sure their fans were a part of every song.  I never realized how many hits Restless Heart really had.  When I was touring with my band “years ago,” I remember singing most of their hits, especially “Wheels.”  I promise you that there was no dead time on stage and none in the audience.  They did a medley of great songs by other groups, and believe this or not, but I felt they did a better job than the original record.  THAT IS REALLY GOING OUT ON THE LIMB, BUT THAT IS WHAT I DO BEST.
Restless Heart finished their segment of the show with a rousing 3-4 standing ovation and could have done another 15 minutes, but they are so professional, that they knew the show had a time limit and they needed to enjoy the moment, and they did, along with all of the fans in attendance.
A 25 minute intermission for band change over, and we were ready to go with Diamond Rio right on schedule.  Both introductions to the groups were done with video screen and my job was so easy.  Diamond Rio’s intro took me back when they first got together as a group.  I have always known Dana Williams and when the band came onstage after the intro, the audience went wild, as they did for Restless Heart.  Diamond Rio begin a string of hits that was unbelievable.  These two groups had more known hits than I have heard in many years.  DR was like a tank roaring through the woods, not stopping for anything but to make sure that everyone was ready for more, and as you probably know, the audience was ready and waiting to hear more of Diamond Rio.  The guys don’t make this a job, because it would lose its glow, and so it is their love of the music that they have been so successful with.  Diamond Rio speaks their true feelings through their music, so all of their songs had a special meaning to each member of the band.  It was non-stop, sing another song, and listen to the heartbeat of their millions of fans who love this group so much.  They gave the crowd a full 80 minutes of hit songs, stories, and great music and once they started, they never looked back.  They were energized by the crowd and fed off of their response which was loud and clear on every song.

When their show ended, they took their bows, and then both groups went out to the front lobby to autograph, take pictures, shake hands with their many friends and fans, and to sell their merchandise.  These two groups are the meaning of what true professionals are to our music industry.  Remember what I said early on, no ego’s, no problems, and great people working for each of them.  They are both the banner that is waving when they step on stage to perform.  Even though they were not the steel guitar and fiddle, they were country with their harmony, their stage presence, and their true love of what they do, and do not think there is one of them in both groups that doesn’t know the reality of what traditional country music is, so when I hear such beautiful harmony such as Diamond Rio and Restless Heart sang, I know they are for real in every aspect of country music.
It was a great evening and everyone was thrilled with both shows.  Impressed with Diamond Rio and Restless Heart, yes I was  and I hope I can work with them again, and again.  Makes a show so much better when the artists care for what they are doing and they make sure that everyone involved in make the show a success, know how much they appreciate the effort put forth.  If you have never been lucky enough to go and see a show with Diamond Rio or Restless Heart, or together, make it a point to get their schedule and when they get close to your area, buy yourself a ticket and go and enjoy some great artists and great music, with many, many hit records.  You will have treated yourself to a special concert that you will not forget.  I PROMISE YOU BOTH SHOWS ARE AWESOME.
Marty Martel
Pres., MSP
Pres., BKD Promotions
Ph.(615) 822-6713
Fx.(615) 824-3830
http://www.bestdamnshows.com
http://www.bkdpromotions.com
Email:  martymartel@bestdamnshows.com