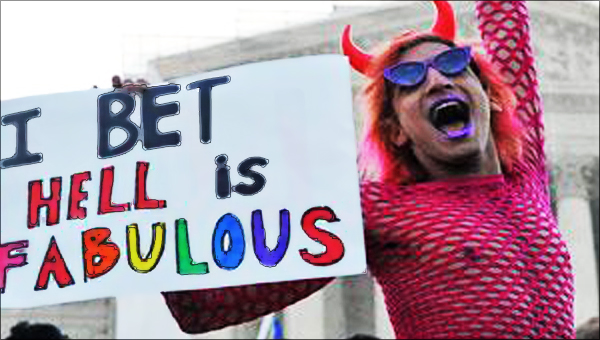 Another 2013 moment in the History Of The World.

TAUNTING GOD: A gay supporter dances in front of the US Supreme Court in Washington, where same-sex marriage took centre stage. Displaying a sign which appears as though gay people would prefer to go to hell than to heaven. It also seems from the banner above that this gay man believes hell is a happy place to be, I dont know if all gay people share this idea. In my opinion I believe anyone who believes that hell exists, believes also that Heaven does. When I think of hell I think of fire and sorrow, when I think of Heaven I think of peace and tranquility.

Like Obama says everyone has the right to be who they are. As a Christian I hope he was including me too ?