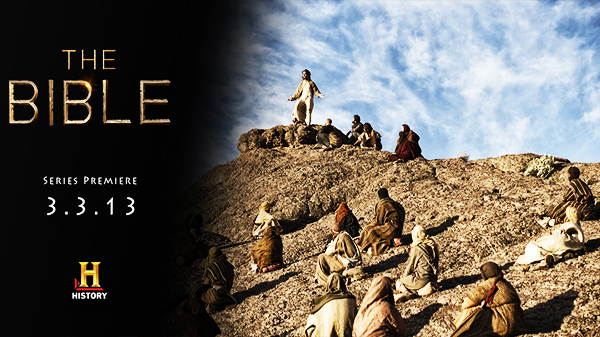 The Bible is an epic five-week, 10 hour television mini-series premiering March 3, 2013 on the History Channel from Emmy Award winning husband and wife team, Mark Burnett and Roma Downey. For two hours each Sunday night millions of viewers will see the Bible come to life in a way never before seen. The final episode of the series will air on Easter Sunday and will feature the death and resurrection of Jesus. To help insure the accuracy of the miniseries, many Christian scholars served as advisors and hundreds of Christian leaders have given their endorsement. – (Outreach Magazine)

“It is also a project close to Mr. Burnett’s heart. In the past couple of years the 52-year-old former paratrooper says he has become deeply religious, a transition he credits to Roma Downey, his wife since 2007. “It wasn’t until I met Roma that I truly understood my faith and it’s been a dynamic shift for me,” Mr. Burnett said. – Wall Street Journal

“Famed television producer Mark Burnett tackles his projects with passion, but The Bible is a special labor of love.
The 10-hour, five-part docudrama, which premieres March 3 on the History Channel, will span the Bible from Genesis to Revelation, presenting some of its best-known stories, including Noah’s Ark, the Exodus, Daniel in the lions’ den and the crucifixion and resurrection of Jesus.

Keith David, an Emmy winner for voice-over performances, will narrate with a musical score by Oscar- and Grammy-winning composer Hans Zimmer.

“In terms of importance, nothing we’ve ever done, not Touched By an Angel, not Survivor, not The Voice, not The Apprentice, none of this could possibly compare to The Bible,” Burnett says. “To us, as a family, we love the Bible.

This is not a TV show to us. It’s images and sound and sacred text that people will still watch, way after our grandchildren are old people.”

Since the entire Bible can’t be covered in 10 hours, the miniseries, which was filmed in Morocco, focuses on a select group of stories and features such compelling figures as Abraham, Moses and David. Some stories had to be compressed for artistic purposes.

“In the end, what we’ve done is a meta-narrative, a grand narrative of emotionally connected stories. We know we’re not qualified to teach the Bible. We’re qualified to be good television producers and storytellers.

Downey came up with the idea for the miniseries a few years ago. “It is our obligation to tell the stories as written,” he says.

“The stories are so brilliant and compelling.”

The project will have broad appeal, he says. “If you know the Bible, you’ll enjoy seeing the stories come to life.

If you’ve never read the Bible, I think you’ll love the stories,” he says. “There’s a reason the Bible is the most widely read book in the world.” – USA Today

General News Comments Off on New Bible Television Mini Series Beginning Today Print this News
Romney Returns, Why Are So Many Against Him? (Newer)
(Older) Marty Martel Prayer Line For Saturday March 2