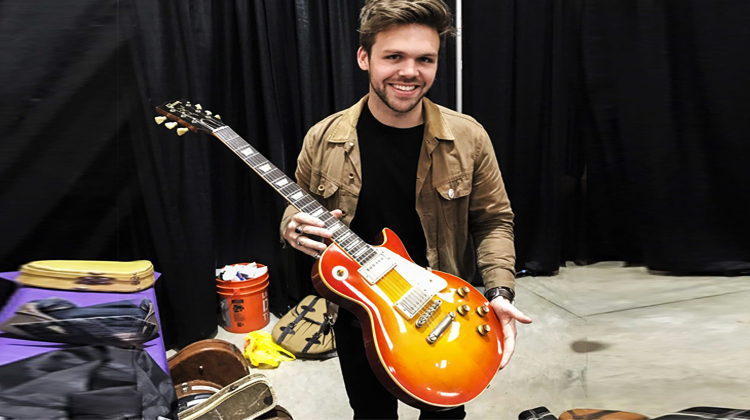 [CG] Trevor, tell us about this special guitar that graces our CG calendar page and how it came into your hands at Emerald City Guitars in Seattle.

[Trevor Boone] First, Joe Bonamassa is one of my favorite guys ever and is a dear friend of mine. I have sold some instruments to him and sold some for him. Joe was making room for a purchase, and we kicked around the idea of finding a home for this 1960 Gibson Les Paul burst that he owned.

Meanwhile, I have a customer turned friend who lives up here in the Northwest who was getting into Les Paul bursts himself. He wanted to find the best one.

Now Joe is not only a great player, but to me, he is an authority on Les Paul bursts. He has been able to travel around and pick them up from interesting places and he thrives on an instrument’s originality and provenance.

So, I knew about this 1960 guitar that Joe had bought in middle America from the original owner. Joe sent us some pictures and I talked with my client/friend and told him that since Joe was now willing to sell it, we needed to look at it. Next I flew out to Joe’s place in Los Angeles to see the guitar in person, and it blew my mind! It was the cleanest burst I had ever seen! Built in later 1960, it was super clean and had an unfaded top. It had a thin neck, it was light weight and had really aggressive PAF pick-ups. It was unbelievable! The case was in as good condition as the guitar was. Everything looked perfect and untouched. I flew the guitar back to Seattle and hand delivered it to my guy who bought it! He was happy to add it to his collection.

A couple of years later, after my guy had purchased a few more things, he discovers that he liked ‘59 bursts. So eventually I helped him find a ‘59 Les Paul, and in that deal we took this 1960 burst in as a trade.

This guitar is largely uncirculated. Joe has played it and it is featured on some of his DVD’s. It is a magnificent example of the cleanest burst I have seen. I was asked by Paul Allen to appraise another 1960 burst, just a couple of months apart from this one, which appraised for $300,000. That one was not as clean. They had an identical neck profile. This one’s top has a richer red to it and the back looks untouched! There seems to be a pattern that every time a burst changes hands, it goes up a little bit in value.

A lot of people think the sweet spot for bursts is the ‘59. And they are right – it’s iconic. But I personally have a lot of affinity for these 60’s. I have found that a thinner neck really complements the qualities of the PAF pick-ups. Where the ‘59’s have that round feeling, a ‘60 has that little bit less wood and a thinner neck backing it up, which makes for a more aggressive, biting, mid focused guitar. I have probably played 35-40 bursts and the ‘60’s have more and more become my favorites. They are a little bit lighter and they also have a little lesser of a price tag (laughing). I feel like they are mean guitars and deliver what I want to hear in a Les Paul burst.

When you are dealing with old growth wood, all of these guitars are different. Each instrument has been exposed to different things, the wood finish soaks up the elements of what they were exposed to… different rooms and bars they were in… it all affects the sound. I come from a Telecaster perspective and I appreciate the twang and brightness that Tele’s have. So, to my ears, the 1960 Les Paul’s are really fun guitars. This super clean one has an asking price of $325,000.

Then again, you hear Bonamassa play a ‘59 and it cripples you, you know? It also has a lot to do with how you are playing the guitar. Coming from a ‘52 Fender blackguard Tele, the ‘60’s Les Paul’s have a crossover appeal for me.