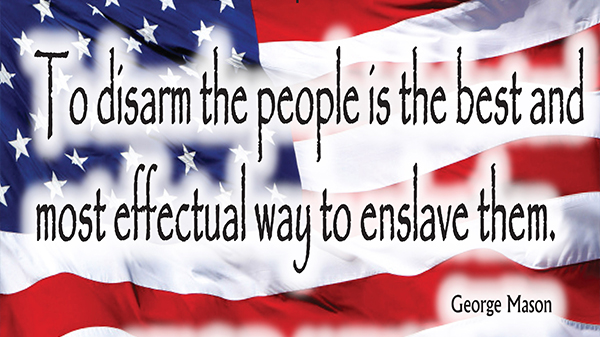 What are our rights? Something given to us by government? Something created by law? Something we need, deserve and demand if we are to survive? We have spilt blood, fought dictators, governments, kings and queens to assert our rights and the right to self-defence from all including government. Our right to arms is the only right that allows us to retain all our rights other than having to fight all over again for them.

Our concern, anger and fear is admirably demonstrated when we realise that in the last century 262 million people were murdered by their own governments. Almost the entire population of the USA.

That is six (6) times more than killed in all the wars. Imagine these bodies placed end to end on the earth’s equator they would circle the earth ten times. Only a fool would trust any government. The greatest murderer of them all, communism.

Scholars have pondered our rights, Blackstone, Tucker, Locke and many others. Studied what they are and why we must have them. The largest collective in-depth research on this subject was done by the US in order to write a Constitution and Bill of Rights which expressly states most but not all of our human creator given rights as instructions to government. Our express instructions which government must obey and agree to do by signing the Constitution.

A Constitution is our instructions to government. Since they are our instructions we police and enforce our instructions and nobody else. The finale say rests with the public, the people, on any addition, subtraction, change, judgement or interpretation of our rights. No person or organisation including government has higher authority, no law is supreme to the will of the people.

In order to ensure that we the people are always in control the US Bill of Rights expressly and correctly gives the most important and protecting right second place only to God. That right is unique and clearly and emphatically states it shall not be infringed by government or anybody else.

The Declaration of Independence makes the purpose of this right unmistakeably clear. It is to protect us from harm from all including governments, ruling parties, monarchs and dictators. Does any sane person think the words “shall not be infringed” means maybe if in this case or a million moms hold hands demanding a segment of society must give up their rights to make them feel better?

Without all our rights including our right to arms we are serfs and slaves. How will we object to any other right being removed if we do not have the power to object and resist authority if needed? By sending a strongly worded letter to the ruler, the dictator or monarch? How will we protect ourselves from those who would do us harm with violence, who want what is ours, including our lives, body, dignity, health, labour, well-being and money.

Many citizens forget our rights belong to all and are willing to negotiate and even request that this supreme right is infringed or removed. It is our rights which protects us from the oppressors, usurper, the ruling parties, governments, dictators and monarchs. Protect us from those who would do us harm, who seek to take what they want from us by force, be they friend, foe, criminal or government.

The quickest way to remove a right is to remove it from a segment of society for the good of others on some unproven pretext or fear.

Those who abuse money to gain power and control are punished for the crime they have committed. Nobody suggests confiscating or controlling the amount or kind of money anyone else has will do a thing to prevent such crimes.

What is it about firearms that invokes such fear that rational logical thought evaporates in an instant to be replaced by fear and the repressive demands that others be punished and made to suffer because they own such instruments.

That anger and rage is directed towards an instrument and those who own them rather than the crime or criminal breaking the law. Directed at the victims, innocent and instrument and not the guilty perpetrator or the root causes of the crime..

No other instrument or object on this earth is credited with being able to control the minds or actions of anything. Firearms must be very very unique and special and this phenomena deserves a lot of investigation to find out its principle of operation.

Why are we not investigating this absolutely unique and powerful force that exists in any firearm no matter what size, power, weight or shape?

It is a very scary thought that should any government, ruling party, dictator or monarch ever discover this power… or have they and are now using it to control and enslave us?

No Comments to Our Rights ? Does It Matter ? No , Yes, Maybe?