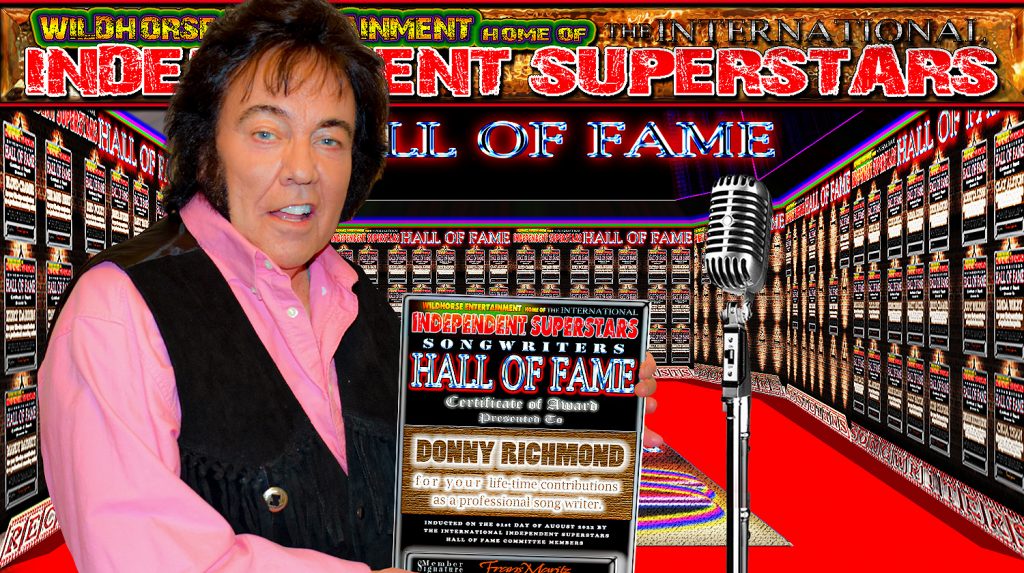 Donny Richmond inducted into the IDSS Songwriters Hall of Fame. Frans Maritz of AirplayExpress signed the official certificate placing Donny into this prestigious organization located in South Africa. Donny has the distinct honor of being inducted into the IDSS Hall of Fame for his life-time contribution to the Independent Music Industry as a Songwriter. Donny is seen holding his award below in the animated Hall Of Fame, confirming his induction into the HALL OF FAME. “ I’m grateful to God for the ability to write songs. I deeply appreciate all the wonderful folks who have made this special honor possible! I was absolutely thrilled to learn of my induction into the Songwriters Hall of Fame! I’ve been writing songs since I was a boy, and it’s such joy to know that they touch people! When it comes to musical success, as the saying goes; “It all begins with the song!” Donny Richmond

Multi-award-winning entertainer Donny Richmond began writing songs as a boy growing up in Maryland, just outside of Washington, D.C. Always the entertainer, Donny sang at his own Senior Prom, wearing an outlandish gold sparkle suit, with gold sparkle shoes. After moving to Hollywood, Calif., Donny was invited to London, England, where he was signed to a worldwide pop music singer/songwriter recording contract with EMI Records. Upon experiencing a spiritual renewal and returning to the U.S., Donny moved to Nashville, TN, where he focused his attention on spiritual music and “good, clean Pop music”. His positive, country-flavored music placed him at the forefront of a freshly developing genre of “Christian Country/Positive Country Music” during the 1990s, and he was arguably the genre’s most publicized artist.

Since that time, Donny has had a hand in the writing of numerous Chart singles internationally, including many #1’s on the Airplay Express Charts. Many of his hits have broken records internationally for longevity at the top of the charts, including “There Is An Answer”, co-written with David Walker, which spent a record-breaking 8 weeks at #1 on the Airplay Express Gospel Charts. Donny’s recording of “Red, White and Blue”, co-written by Donny and Bill McIntire, was simultaneously #1 in 4 different genres of music; Traditional Country, Gospel, Patriotic, and Pop. Other record-breaking #1 songs Donny has had a hand in the writing of, both in the U.S. and various countries around the world, include “Squeegee”(for which an internationally popular line dance was also choreographed), “What Will He Say”, “Ridin’ Out The Storm” and “The Smaller The Town” (both of which were also featured in the Movie “Saving Faith”, distributed by media giant Lionsgate Entertainment), “That’s What Christmas Means”(featured in the Movie “The Christmas Reunion”), “Ask The Man Upstairs” and many others. Donny’s numerous Awards from various music associations have included Male Vocalist Of The Year, Songwriter Of The Year, Producer Of The Year, Artist Of The Decade, Entertainer Of The Decade, and the Living Legend Award.