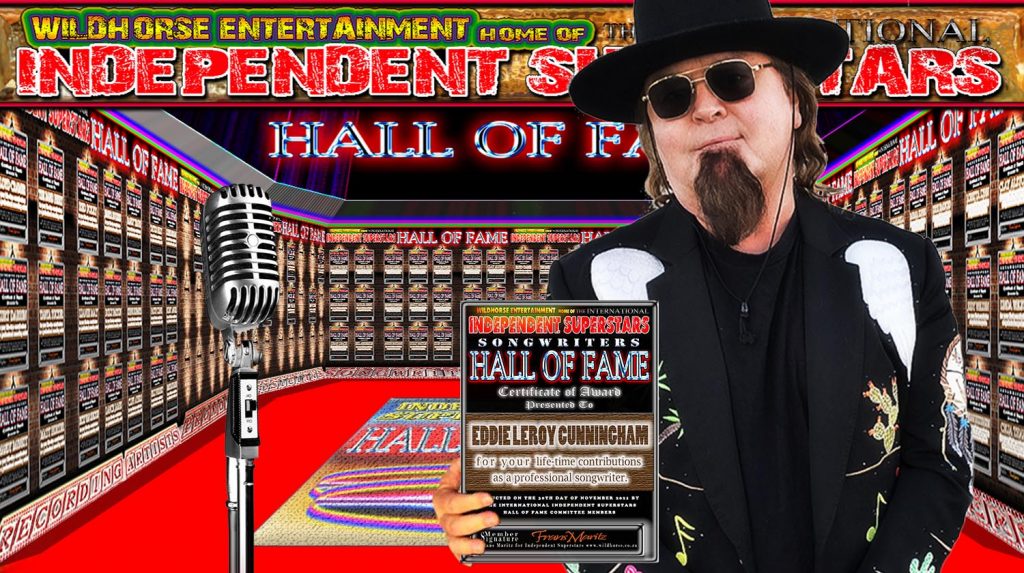 Eddie Leroy Cunningham has been inducted into the Independent Superstars “Songwriters” Hall of Fame. Frans Maritz (Wildhorse Entertainment) signed the official certificate placing Eddie into this prestigious organization located in South Africa. Eddie has the distinct honor of being inducted into the IDSS Hall of Fame for his lifetime contribution to the Independent Music Industry as a Songwriter. Eddie is seen holding his award below in the animated Hall Of Fame, confirming his induction into the Hall Of Fame. ‘I am very excited to be inducted into the Songwriter’s Hall of Fame. It is great to get recognized by your peers in the music industry for all the years of hard work and true dedication to your songwriting craft, in the hopes of writing a song that could make a difference in the world – Thank you, Frans Maritz, Airplay Express, and everyone who has supported me on the road leading to me being entered into this prestigious Hall of Songwriters”. – Eddie Leroy Cunningham 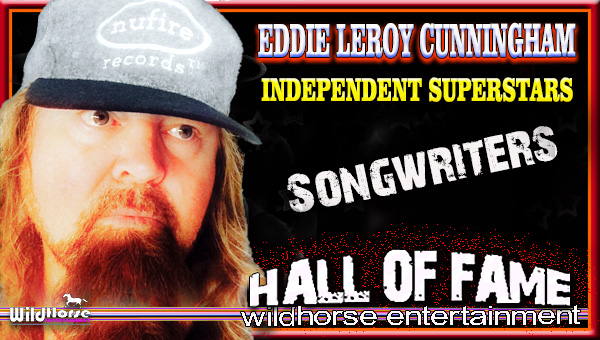 Eddie LeRoy Cunningham is a songwriter gifted by God with this special talent! Eddie is very busy writing songs every day and Is a very accomplished artist and sought-after singer-songwriter in Nashville and Los Angeles. I’d like to say I’m a channeler of cosmic stories. Eclectic is an understatement when describing the singing, songwriting, and song styling talents of Murfreesboro, Tennessee’s recording artist, and producer, winner of the 8th Annual Independent Music Award for his heart blasting power gospel hit, “Jesus Is More Than A Name.” Conceived and recorded as part of the triple Grammy Award-nominated Gram Parsons Notebook tribute CD, “Jesus Is More Than A Name” has continued winning awards and topping Americana and Faith-Based charts ever since – with no sign of stopping. Prior to winning the Independent Music Award for Best Gospel, “Jesus Is More Than A Name” earned Cunningham a spot on the three-time Grammy Award-nominated record The Gram Parsons Notebook, “Co-producing The Gram Parsons Notebook was a total joy and an experience I’ll never forget,” says Grammy Award-winning producer Carl Jackson. “Eddie pours his heart and soul into his performance on ‘Jesus Is More Than A Name’ and I’m proud to be a small part of the emotion captured on record forever for all to hear.” At the recording session, legendary blind piano player for the Allman Brothers Johnny Neel complemented Eddie’s performance by saying, “You sing like a blind man, Brother”. Authenticity and diversity prevail in the music of Eddie Cunningham. From soulful country ballads to rock and honky-tonk, from love songs to hillbilly trucker music, from pure Americana to soul and r&b, from down-home gospel to Native American tribal rock, from alternative country to bluegrass to Latin urban and back again, Cunningham – amazingly – does it all justice with 15 CDs to date and inclusion on several various compilations Eddie’s songs are packed with outstanding original melodies, emotionally honest lyrics and his signature blast-to-the-heart soulfully beautiful vocals. 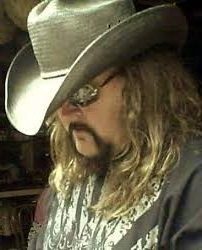 Along with over 20 number ones at AirplayExpress worldwide Eddie has already been inducted into the Independent Superstars Recording Artists Hall Of Fame and is so honored for that! Eddie is the Grand prize winner in the Jim Beam Country Band search and has won Top Honors at The Southern California Music Award for Best Gospel, two nominations by The Los Angeles Music Awards for Best Gospel and Best Male Vocalist and Male Vocalist and Songwriter of the year at the (C.C.M.A.’s) along with The West Coast Songwriters International Award for Top Gospel, Honorable Mention in The Billboard World Song Contest, inclusion on the Music Row Top Ten Americana CD for The Gram Parsons Notebook, Top Christian Artist on Independent Gospel Online Radio and first place on Broadjam.com’s Top Ten Country list and more. 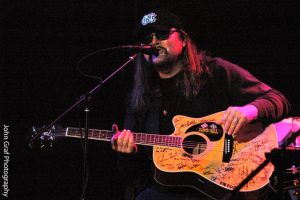 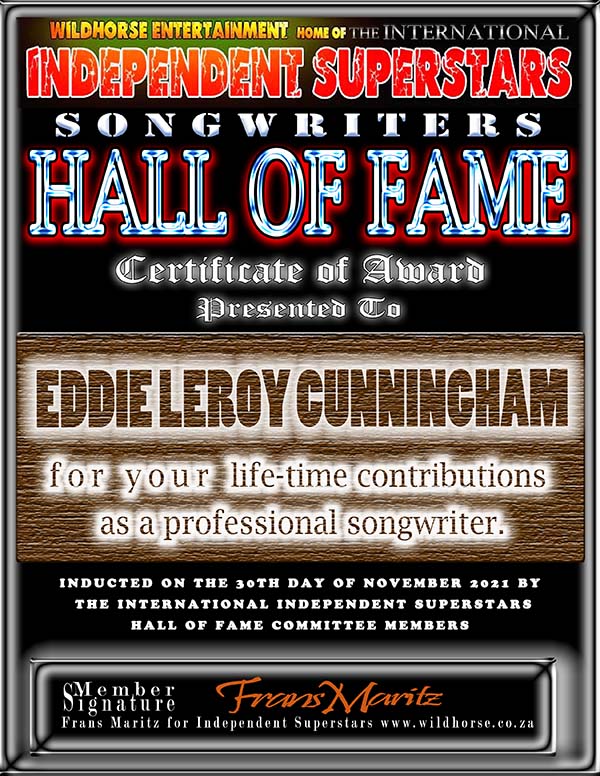