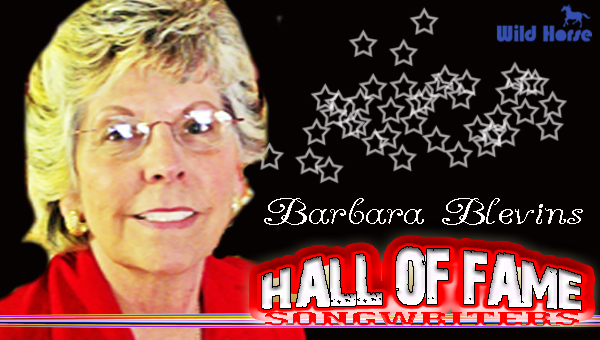 Barbara Blevins has been inducted into the Independent Superstars Songwriters Hall of Fame. Frans Maritz of Wildhorse Entertainment, located in South Africa, signed the official certificate placing Barbara into this prestigious organization. Barbara has the distinct honor of being inducted into the IDSS Hall of Fame for her life-time contribution to the Music Industry, which she loves so much. Barbara is seen in the picture below with the award confirming her induction into the HALL OF FAME. “I received a really nice package in the mail about and hour ago, I dont believe I deserve it, but I will cherish it forever, I was shocked and happy being inducted into the Hall Of Fame”  Barbara Blevins on receiving the award. Well we believe that Barbara does deserve this award, she has won many others, so this award will never be lonely in her home. Congratulation….Barbara Blevins

Barbara Birkla Blevins was born may 31, 1942, in Mt. Carmel, ill.  moved to Pecos, TX. in the late 50’s, graduated in 1961.I’ve always been interested in writing music, but was too busy working and raising a family. In the early 90’s, I became serious about becoming a song writer and was encouraged by the 2 B’s, Clyde and Keith. I became the 3rd B. When the album Reflections was being produced into Keith’s first CD, we flew to Nashville to meet with Keith and get acquainted with Kitty Wells and Johnny Wright. At that time Keith was opening the show for Kitty and Johnny. We were invited to ride the tour bus with Kitty, Johnny and Keith to the WSM radio station at Ernest Tubb record shop. When the bus arrived at the WSM radio station, I noticed a young woman waiting and holding several 78 rpm record covers as MS. Kitty Wells stepped off the bus, this girl approached her and trembled as she asked  Kitty to autograph them for her. Later on we learned that this dedicated fan with 3 children, drove all night and most of the day, just to meet and hear Kitty Wells. She was from West Virginia and grew up listening to MS. Kitty records. When they arrived at Ernest Tubb record shop, hungry and tired, afraid they wouldn’t get a parking place, she had the kids to sit in the parking space and save it while she went to a nearby McDonald’s for burgers and fries, that is what I call a truly dedicated fan. That’s the kind of fan we would like to have. In the future I plan on working and writing with the 2-b’s.