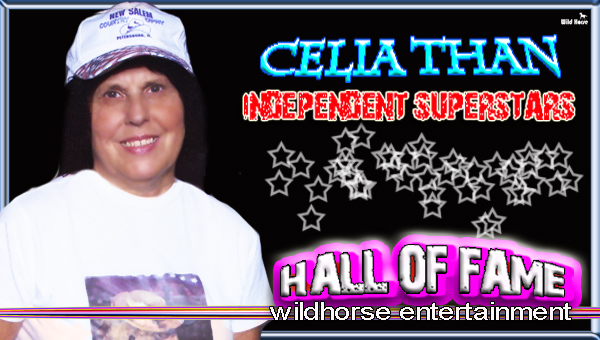 Celia Than has been inducted into the Independent Superstars Songwriters Hall of Fame. Frans Maritz (Wildhorse Entertainment) signed the official certificate placing Celia into this prestigious organization located in South Africa.  Celia has the distinct honor of being inducted into IDSS Hall of Fame for her life-time contribution to the Independent Music Industry. Celia is seen in the picture below with the award confirming her induction into the HALL OF FAME. “I am proud of my award and of my accomplishments in the music business”, Celia Than

Biography of Celia Than:

Celia was born Diana Sue Heller in Canton, Illinois April 8,1952. As a little girl, she was inspired by her Mother, Father and Uncle Dick . Music always played a big part in her home, and while her Dad and Uncle Dick played guitar, Celia and her Mother sang along. Celia’s three sisters Bernita, Leona, Juanita and brother Leroy grew up together. When she was younger, Celia always wanted to be like Patsy Cline, Kitty Wells, Loretta Lynn and Tammy Wynette. At the young age of six, her folks took her to the Grand Ole Opry, where she asked to sing on stage, and was told to come back when she grew up. Celia started out in her twenties, but got side tracked raising two boys and a daughter, Shawn, Paul and Buffy whom Celia is all equally proud of. Celia remembers singing her babies to sleep with songs of her favorite singers. When Celia turned 30 she went to Anchorage Alaska, singing with a country music band at the Buckaroo Club. At 47 Celia wrote her first song….”Baby I Tried”, it sold very well at the time. Celia finally left Alaska and come home to Illinois and continued working with “Big Band Hall Of Fammer Cliff Ayers” who helped her promote and produce her first song. In 2004 Celia recorded her first album titled “I’m Playing Second Fiddle” with the help of Bruce Goodman. Celia received “Vocalist Of The Year 2006” and “Country Pop Golden Vocalist 2007” both for the song “Baby I Tried” at the Entertainer Indie Association 26th Awards Show. Recently Celia started working with Keith Bradford, who produced her new CD  “Heroes Never Die” , which also includes her song ” Baby I Tried “, and is presently continuing to work with KMA records Nashville,Tennessee.

CELIA THAN HALL OF FAME AWARD

No Comments to Country Music Songwriter Celia Than Inducted into S.African Independent Superstars Hall Of fame