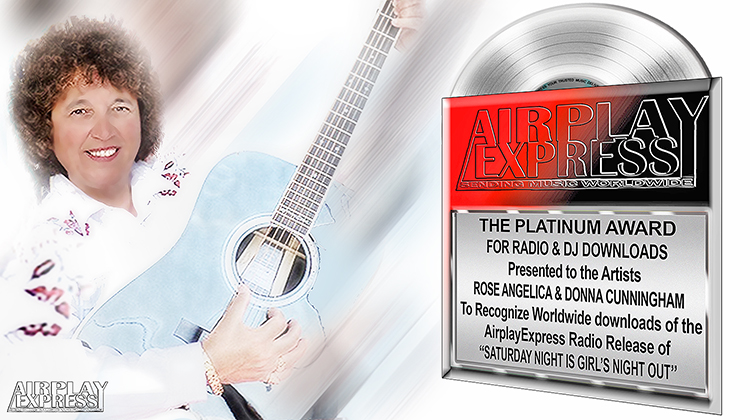 Word came earlier this month that the Mingo Junction songwriter and recording artist on Century II Records in Nashville went platinum with her hit song “Saturday Night Is Girls’ Night Out,” recorded with Donna Cunningham. “Reaching the No. 1 position on the AirplayExpress Country Top 40 is no easy task,” reads her notification of the personal milestone. “To be No. 1 means you have a song that is special, it has that something that others don’t have, that being the magic of a hit tune. A No. 1 song could become No. 1 because it is well written, it has a good beat that makes people wanna’ dance, a singer who is just so good that no matter what he or she sings it hits the No. 1 slot, it has an amazing melody that no one can ignore once heard, or it is a combination of all the above,” the congratulatory acknowledgment continues. 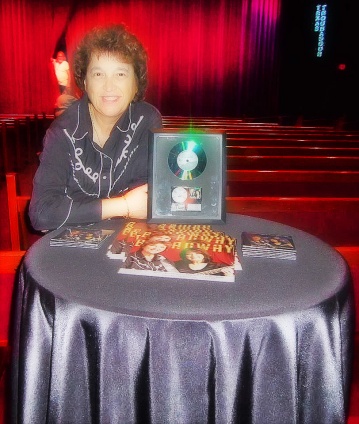 “Your song has all these qualities, and that is why it made it to the top of the country charts, and therefore, we at AirplayExpress want you to know that we acknowledge this achievement and therefore present you with this award.

For Angelica, whose music has been on Internet radio, AM/FM radio, satellite radio and music video channels since 2011, the desire to head to Nashville and make it in the music industry comes more than three decades after she’d initially toyed with the idea. What stopped her then was the practical advice of her father, the late Albert Gron, who urged her to put her music education degree to use, a decision she respected, appreciated and never regretted. But the death of her mother, the late Joanna Gron would revive the dream in a now-or-never kind of fashion.

Angelica rewinds to tell the story of her musical journey, a story in which singing was always a part of her life. She grew up on a farm in Smithfield.

“I sang in church with the choir and at Smithfield High School, and I always sang country music, oldies, all the great Temptations music and ‘Under the Boardwalk’ and stuff I still do,” Angelica said. “Music has always been there — I was always into music pretty heavy,” said the Elvis fan. “I can still remember when Elvis went to the service. I remember sitting there crying, ‘we’re not going to hear him on the radio any more.’ I was like 5 years old.”

She graduated from Buckeye North High School in Brilliant in 1973 — its first graduating class after Smithfield High School had closed — and headed off to Ohio State University on a music scholarship, earning a bachelor’s degree in music education. In the interim, she became one of the first women to make the Ohio State Marching Band and continues to be active in the alumni band.

She wrote songs, too.

“I started writing in college,” she said. “When I graduated, I wanted to go to Nashville and see if I could make it, but my dad said you’ve got a job, a teaching offer, and it’s a safe route to go. You have an income, why go chance it, why go there, and then have nothing?”

Angelica said she heeded her father’s advice and taught, first at Buckeye South, then Mingo High School for 10 years, where she initially was assistant band director, then director. She earned her master’s degree in music at OSU, served as a music education consultant for Gerrero’s in Steubenville and Wheeling for 20 years, teaching lessons there as well, and also taught at Bethany College and the former Jefferson Community College.

“I kept writing and playing local around town, here and there, writing country, a little bit of everything, dabbling,” she said. “As I heard country music evolving, it was no longer country music, and I’m thinking what happened, it’s like garbage. It just changed,” Angelica said. “I thought, man. I’m better than most of these people. My songs sound better than that. I know music and how to write it.”

The death of Steubenville native Dean Martin on Christmas Day in 1995 would redirect Angelica’s attention as she would come to serve as chairman of the local Dean Martin Festival for 21 years, a leadership role that wrapped up at the 2017 observance. The event has helped raise money through the years for music scholarships awarded at Steubenville High School. A visitor to the festival moved music back into Angelica’s thoughts with increased conviction. “What really dove me into music was a friend of mine who came here from Virginia,” she said, referring to Dale Kennedy, who she met at a Dean Martin festival in the late 1990s. Casual conversation about country music brought the revelation that Kennedy had played bluegrass with Ralph Stanley and had played fiddle for Hank Williams Jr. Angelica was impressed.

The two made good on a let’s-get-together-and-play promise. “He says, ‘You’re great — you gotta’ go to Nashville’ — and I said, ‘You’re crazy!’ but I played him some of my songs, and he said they are good enough,” Angelica continued with her story. “But what really sent me to Nashville was in 2010 my mother died suddenly, and I made my mind up, I told Richard, my husband, that I am going to put something out there, a song I wrote called ‘The Wish.’ I am going to put it out on the Internet radio. I recorded it at Studio L in Weirton and put it on Internet radio, and it was out there about a week, and I got five or six hits from recording studios in Nashville wanting to sign me, so I researched them, and I found Lamon Records, and that’s who I was with.”

The company liked the song, which Angelica wrote and sang about a child’s wish to be adopted at Christmas. What else did she have was the next question. Angelica explained she had other songs, but not recorded. She did seven songs on a cassette recorder and sent them on request.

Angelica was signed for a five-year contract and put out her first four-song promotional EP. On it was her first big hit, “Girls Just Want to Drink Beer,” a song she’d written during her OSU days. “That song was written in 1975. My girlfriends all knew it, so when it came out, they went nuts,” she said.

“It went straight to No. 1. People loved it,” Angelica said. “I was shocked. I couldn’t believe it, because my music is like old country music from the Loretta Lynn era and Dolly Parton, what I sing and write, and here it took off like wildfire. I am on the charts with Taylor Swift and Billy Ray Cyrus and Big and Rich, and I can’t believe this, and it goes to No. 1.

“Then they brought ‘The Wish’ back at Christmas, and it was on the charts for 48 weeks, and I went to the CMA Fest that year, and everyone was going crazy,” she said with a smile, recalling those events of 2012.

Angelica said she and her husband were eating when Billy Ray Cyrus approached them and said it was an honor to meet her. “People were starting to recognize my writing,” she said.

Come June, Angelica will be participating in her seventh CMA music festival, a Nashville tradition. “All the fans come to town and what we do as artists is play all around town all week, and they charge like $10 to get in, and all the money — nobody makes money or gets paid — all the money goes to music education to buy instruments for poor kids,” Angelica explained.

“This year is huge because my latest song, ‘Saturday Night Is Girls’ Night Out,’ went platinum on AirPlayExpress charts,” she said.

The song’s appeal, she believes, is it’s good dance beat. “People really like that.”

The CMA Fests are occasion to be in the company of many big-name stars. Angelica has opened, for example, for Phil Vassar. “I’m looking forward to going back. It’s a great time,” she said. Beyond Nashville, Angelica said her itinerary will include performing at the Riverside Casino in Laughlin, Nev., and at Dollywood in Pigeon Forge, Tenn.

She’s also working on a song for Latino star Nuby. “I ran into her agent, and he was so thrilled because I went platinum, he wants me to write a country song for the two of us to do a duet, so that is what I’m working on — an upbeat country song,” she said. 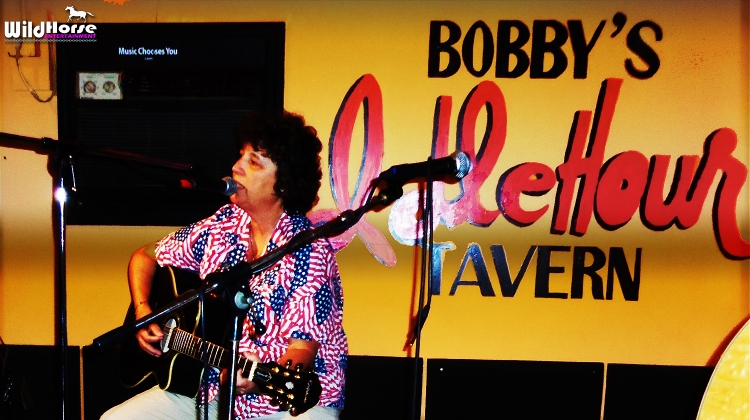 Angelica is glad she listened to her father.

Her takeaway message, she said, is “never give up your dream. “Dreams do come true. You’re not going to live forever so you’d better do it now. If you have something unfinished, you’d better finish it. You’d better go for it — go for the gusto.”

No Comments to Rose Angelica Hits Milestone With ‘Platinum Award’