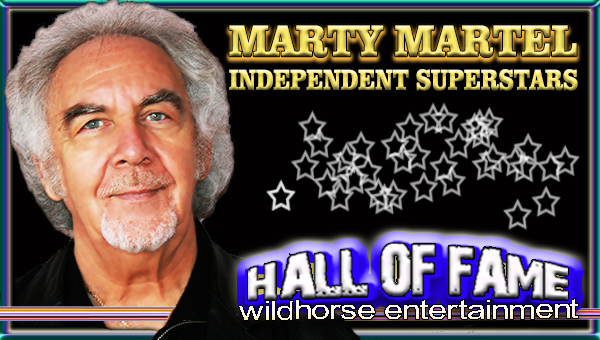 Marty Martel has been inducted into the Independent Superstars “Songwriters” Hall of Fame. Frans Maritz (Wildhorse Entertainment) signed the official certificate placing Marty  into this prestigious organization located in South Africa. Marty has the distinct honor of being inducted into the IDSS Hall of Fame for his life-time contribution to the Independent Music Industry. Marty is seen receiving his award in the picture below from Julie Richardson, during a recent function in Nashville, confirming his induction into the HALL OF FAME. “Just read an email from Keith Bradford and I was knocked out of my chair.  Never expected anything like this beautiful recognition award.  From the bottom of my heart, I thank you so much for making this day of my life one of complete happiness.  God Bless you My Friend.  It is awesomely beautiful, and I know I do not deserve it, but I will take it.” Marty Martel

Marty Martel, has done so much, and been more places than most people we know. During Marty’s exciting and successful career, he has performed as a solo artist on tour, a band leader, written #1 hit songs and currently still a world-class promoter, booking agent, producer and that’s just a few things that comes to mind when mentioning some of Marty’s accomplishments. He writes books and articles for various print and internet web sites. Marty even has his own weekly news program on worldwide radio, called “Off The Cuff News” where he tells the news like it is and Off The Cuff. He has known and been friends with most everyone in the music business, and we mean everyone, you name them Marty has known them, and still knows them. Marty has earned the respect of all who have had the privilege of crossing his path, and everyone respects him for his knowledge and integrity in this the music business. He owns his own promotion companies and lives and operates mostly from Nashville Tennessee. There is so much more to Marty than what we have printed here, so we assure you that Marty’s Biography will be updated as soon as we can gather more information about this Million Dollar Man, Hall Of Fame Member, Marty Martel.