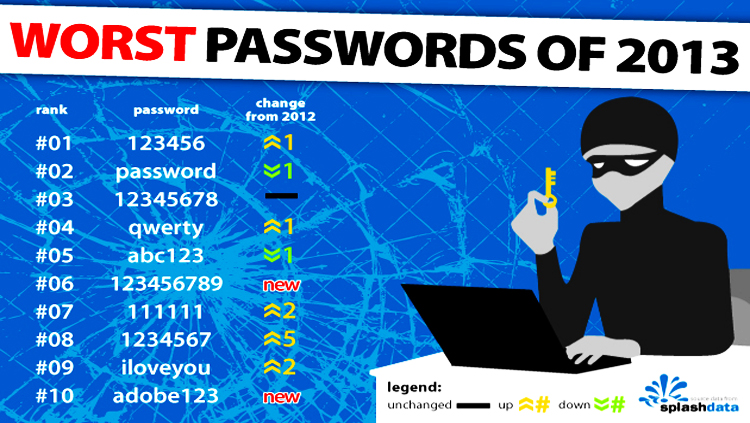 The 2013 list of worst passwords, influenced by postings from the Adobe breach, demonstrates the importance of not basing passwords on the application or website being accessed

LOS GATOS, CA – SplashData has announced its annual list of the 25 most common passwords found on the Internet. For the first time since SplashData began compiling its annual list, “password” has lost its title as the most common and therefore Worst Password, and two-time runner-up “123456” took the dubious honor. “Password” fell to #2.

“Seeing passwords like ‘adobe123’ and ‘photoshop’ on this list offers a good reminder not to base your password on the name of the website or application you are accessing,” says Morgan Slain, CEO of SplashData.

SplashData’s list of frequently used passwords shows that many people continue to put themselves at risk by using weak, easily guessable passwords. Some other passwords in the Top Ten include “qwerty,” “abc123,” “111111,” and “iloveyou.”

“Another interesting aspect of this year’s list is that more short numerical passwords showed up even though websites are starting to enforce stronger password policies,” Slain said. For example, new to this year’s list are simple and easily guessable passwords like “1234” at #16, “12345” at #20, and “000000” at #25.

SplashData, provider of the SplashID Safe line of password management applications, releases its annual list in an effort to encourage the adoption of stronger passwords. “As always, we hope that with more publicity about how risky it is to use weak passwords, more people will start taking simple steps to protect themselves by using stronger passwords and using different passwords for different websites.”

SplashData’s top 25 list was compiled from files containing millions of stolen passwords posted online during the previous year. The company advises consumers or businesses using any of the passwords on the list to change them immediately.

Use passwords of eight characters or more with mixed types of characters. But even passwords with common substitutions like “dr4mat1c” can be vulnerable to attackers’ increasingly sophisticated technology, and random combinations like “j%7K&yPx$” can be difficult to remember. One way to create more secure passwords that are easy to recall is to use passphrases — short words with spaces or other characters separating them. It’s best to use random words rather than common phrases. For example, “cakes years birthday” or “smiles_light_skip?”
Avoid using the same username/password combination for multiple websites.  Especially risky is using the same password for entertainment sites that you do for online email, social networking, or financial service sites. Use different passwords for each new website or service you sign up for.

Having trouble remembering all those different strong passwords? Try using a password manager application that organizes and protects passwords and can automatically log you into websites. There are numerous applications available, but choose one with a strong track record of reliability and security like SplashID Safe, which has a 10 year history and over 1 million users. SplashID Safe has versions available for Windows and Mac as well as smartphones and tablet devices.

SplashData has been a leading provider of password management applications for over 10 years. SplashID Safe (www.splashid.com) has grown to be most trusted multi-platform password solution for both the consumer and enterprise markets with over 1 million users worldwide. SplashID Safe’s popularity continues to rise as the number of user names, passwords, and account numbers most people have to remember is rapidly multiplying. At the same time, the risk of this kind of sensitive information falling into the wrong hands has never been greater. SplashID Safe helps solve this dilemma by creating an encrypted digital safe available on smartphones, computers, USB keys, or online, offering the peace of mind of being able to access critical information whenever needed while maintaining the security of 256-bit encryption. SplashData was founded in 2000 and is based in Los Gatos, CA.

Call
Send SMS
Add to Skype
You’ll need Skype CreditFree via Skype
Uncategorized Comments Off on Top 25 Worst Passwords For 2013 is yours listed? Print this News
Here Is Your Next Mouse Are You Ready ? (Newer)
(Older) Goats Balancing on a Flexible Steel Ribbon – WET TV