RSS feed for this section
This category contains 3 posts

Nashville to build Soccer Stadium at the Fairgrounds

Several hours before the vote the group called Save our Fairgrounds filed a lawsuit in an effort to protect the Fairgrounds & stop Metro Government from building a soccer stadium at the site.

They called the plan the “rape of an institution” and a “ripoff of the taxpayers.”

NASHVILLE, Tenn. (WKRN) – After hours of debate that stretched into the night, Metro Council voted to approve measures needed to move forward with plans for a Major League Soccer stadium at the Fairgrounds in Nashville.

Council voted to demolish certain buildings and structures necessary for the construction of the new stadium.

POLL: Do you agree with the decision to build a soccer stadium at the Nashville Fairgrounds?

Members voted to approve the rezoning of 10 acres for private mixed-use development.

They approved a motion to issue $50 million in bonds needed for infrastructure and upgrades.

Council members also approved a resolution to put a soccer practice facility in North Nashville at a site to be determined.

Earlier during the debate, a proposal was made to let the voters decide on the $50 million dollar bond issue in a referendum in November. The motion was defeated.

Nashville Mayor David Briley released a statement after the vote, which reads:

I applaud the Council for its final approval of legislation to bring Major League Soccer to Nashville. This project will have a positive, lasting impact on our entire community. It embraces growth and new opportunities while ensuring every resident benefits and thrives with it. This project will provide needed upgrades to the Fairgrounds, essential affordable housing, broad minority business opportunities and increased safety protections for our workers. This project will improve the Fairgrounds facilities but it will not change our customs or the activities we cherish. I pledge to all of those engaged in these discussions over the past months that I am listening. Together we will build on the years of community tradition at our Fairgrounds and I look forward to continuing to work closely with you as this project moves forward.

Several hours before the vote, the group called Save our Fairgrounds filed a lawsuit in an effort to protect the Fairgrounds and stop Metro Government from building a soccer stadium at the site. They called the plan the “rape of an institution” and a “ripoff of the taxpayers.”

The soccer stadium controversy is one of the hottest development issues facing Nashville.

Another icon ‘Bobby’s Idle Hour’ doomed to die, unless…

Looks like another piece of Music Row will get bulldozed – along with all the history embedded in those bricks – unless people who care get involved. A developer is looking to tear down several more buildings along 16thAvenue to erect what’s called a ‘six-story boutique office building.’ Among the structures under threat: the Rhinestone Wedding Chapel, and Big Spark Music. But perhaps the most visible and well-known of the threatened businesses is Bobby’s Idle Hour. The 16thAvenue tavern has been the haunt of singers, songwriters, music biz workers, area residents and tourists for decades.

According to a story in The Tennessean (May 23, 2018) Warner/Chappell Music’s publishing building, the Ed Bruce Agency and the building that formerly housed the Creative Soul Music Academy and are also under threat.

The plans to tear down the buildings and replace them with an office block have been proposed by Panattoni Development Co, who recently constructed the building that now houses SESAC and the Country Music Association at 35 Music Square East.

Not so long ago, virtually all the buildings along 16thAvenue and parts of 17thAvenue housed recording studios, record label offices, songwriters’ rooms and video producers’ offices. The unassuming one- and two-story structures still looked like the residences they had once been, quirkily built and often unadorned by commercial signage.

But over the past few years, more than forty buildings along Music Row have been destroyed and replaced by apartment blocks and office buildings.A drive along 16thand then back along 17thAvenue shows that the demolition and construction continues, seemingly unabated. 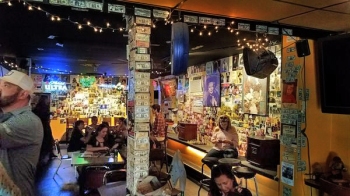 It might seem that those of us who really care about the legacy of Music Row are helpless in the face of multi-million dollar construction corporations, but that isn’t necessarily the case. In 2014, plans to demolish RCA Studio A were thwarted by a grass-roots campaign that saved the building that gave birth to songs by Charley Pride, Dolly Parton, Willie Nelson and many more, under the guidance of Chet Atkins and Owen Bradley.

The preservation effort to save Studio A was galvanized by philanthropist Aubrey Preston and pop artist Ben Folds. By recruiting and inspiring others – including record label executive Mike Curb – $5.6 million was raised and the building was purchased and reactivated.Now, the studio, under the direction of Nashville producer Dave Cobb, continues to create new music from artists that include Jason Isbell and Chris Stapleton. Music is what has made Nashville famous and Music Row is the beating heart of Nashville’s music.But every day, another part of that heart is being cut out and tossed in the dumpster.

At a public hearing, held May 22, songwriter Trey Bruce said that the legacy of the songwriters and musicians who breathed life into Music Row should be preserved.Without the story of that legacy, Bruce said, Nashville would be “just another Atlanta, Knoxville or Chattanooga.”

It seems unthinkable that yet another Music Row landmark could soon be nothing more than rubble buried beneath another soulless concrete and glass office block. The owner of Bobby’s Idle Hour, Thom ‘Lizard’ Case, recently told WSMV News4, “We get some of the big dogs, but my favorite are the people who wrote those songs for the big dogs. Every day we have songwriters here. Some of them are straight off the bus. Some have been here 30-40 years.”

The wrecking ball stands ready.Unless another grass roots movement – the kind that saved and reinvigorated RCA Studio A – can rise up quickly and take action. It seems that the tour buses make fewer and fewer stops along Music Row these days.Maybe in a year or so, a bus can pull up at the corner of 16thAvenue and Tremont Street. The tour guide will say, “See that big concrete building? That’s where Bobby’s Idle Hour Tavern used to be. It was always full of songwriters who wrote hundreds of your favorite songs…”She won’t have to shout.There’ll be nobody on the bus.

The top three spots on May 2018’s Top 40 Country Songs list are a reflection of how country music has changed over the last five years. You can run all three through one of the most interesting and controversial artists around. Do you think you can guess which song is No. 1?

Kane Brown learned a few lessons on touring from Florida Georgia Line, while Morgan Wallen is singing a FGL co-written song after enjoying life on the road with Tyler Hubbard and Brian Kelley. The is Florida Georgia Line’s collab with Bebe Rexha. “Meant to Be” isn’t No. 1 this month, but not because this group didn’t try. The country-pop song was edged out by a man who made a strong impression at the 2018 ACM Awards.

Debuts on the May 2018 Top 40 Songs list include Sugarland’s return with Taylor Swift and Carrie Underwood’s “Cry Pretty,” a song she introduced to fans at the ACM Awards. Taste of Country RISER Devin Dawson also cracks the Top 40 for the first time, alongside newcomers like Mitchell Tenpenny and Lanco. Can you find your favorite song? Let us know where it should be in the comments section below and then listen to them in the playlist above!

The list of Top 40 Country Songs of May 2018 is compiled from Billboard chart data and sales figures, in addition to staff opinion and reader feedback.

What would you add to our list of the Top 40 country songs for May 2018? Share your opinions on this list — as well as the songs that deserve to be included, but weren’t — in the comments section below.

Is This a Future No. 1 Country Song? Devin Dawson, “Asking For A Friend”