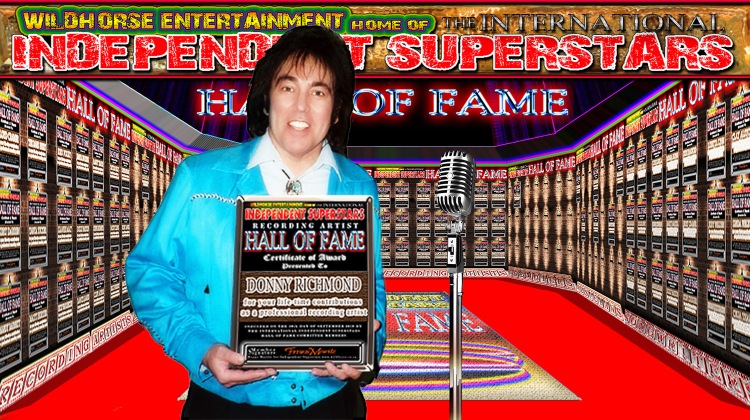 Donny Richmond has been inducted into the Independent Superstars “Recording Artists” Hall of Fame. Frans Maritz (Wildhorse Entertainment) signed the official certificate placing Donny into this prestigious organization located in South Africa. Donny has the distinct honor of being inducted into the IDSS Hall of Fame for his life-time contribution to the Independent Music Industry as a Recording Artist. Donny is seen holding his award below in the animated Hall Of Fame, confirming his induction into the HALL OF FAME. “ Thanks again, Pardner. I’m very honored and excited at this, being in the Hall Of Fame is just so great”- Donny Richmond

Donny Richmond is a multi-talented, multi-award winning entertainer. The singer, composer, actor, and TV personality has achieved success in various music genres including country, gospel, and pop. Numerous awards and accolades bestowed to Donny include Artist Of The Decade, Entertainer Of The Decade, The Living Legend Award, and nominations for Best Lead Actor in a Feature Film. With his induction into the Airplay Express Recording Artist Hall Of Fame, Donny is now an inductee of 4 different music Halls Of Fame.

Early in his career, while living in England, Richmond was signed to a worldwide contract with London based EMI Records, before experiencing a spiritual renewal, which led him to approach his music differently. Returning to the States, he was, during the late 1990’s, at the forefront of what became the “Christian Country Music” movement.

Today, Donny Richmond is recognized as an innovator, leader, and consummate entertainer. In fact, entertaining has been a way of life for Donny since he was a child. His winning smile, pleasing personality and healthy appearance helped Donny win a contest to pose for a milk advertisement when he was a baby. Donny was just four years old when he began singing for the neighbors around the kids’ swings in the backyard. In the second grade, if it rained and the class couldn’t go outdoors for recess, the teacher would call on Donny to sing.

Richmond grew up in the suburbs of Maryland just outside of Washington, D.C. In Junior and Senior High School, he became interested in writing songs and wearing “dude” clothes; and would entertain his classmates. Donny sang at his own Senior Prom, wearing an outlandish gold outfit, including gold sparkle shoes. After high school and while appearing with bands at night, Donny attended college by day, studying music and acting.

In 1992, while visiting Nashville, Richmond was invited to appear on a special recording project with Stonewall Jackson, featuring many of the all-time top country music artists. Donny found himself in the recording studio alongside Garth Brooks and others. The resulting Album is entitled “Stonewall Jackson & Super Friends”. Other artists featured include Vince Gill, Alison Kraus, Tim McGraw, Charlie Daniels – a host of the country music superstars and “legends”.

Richmond moved to Nashville in 1993, and since that time has gone on to make history by charting both on mainstream Country Music Charts and Christian/Country Gospel Charts simultaneously. In the U.S. during the 1990’s, Richmond was at the forefront of the “Christian Country Music” movement. Donny was arguably the emerging genre’s most publicized artist, and was its first recording artist to be selected to appear on the mainstream Country Music CDX Compilation disc, distributed to thousands of radio stations across America, and internationally. Also appearing on the disc were Garth Brooks, George Jones, Wynonna Judd, and Kenny Chesney.

While having many National U.S. #1 Country Gospel songs and winning a host of Music Association Awards, Richmond has also clocked up an extremely impressive list of television appearances, including his own “The Don Richmond Show,” which had its beginnings in September 1997 for the Christian Television Network in Nashville, Tennessee, and has been viewed by millions since.

American Country (GAC) and VH-1. It has continued to receive airplay each Christmas season, and is now regarded by many as a classic. “Heartbreak Holiday” also led to the Christmas 2005 short feature film of the same name and starring Richmond, which drew rave reviews on American television. Donny has also been featured on TV networks circling the globe.

The wonderful response from European television audiences inspired Donny to release more material and to tour there.

Many notable successes are included in Richmond’s string of hits. Donny’s “Ask The Man Upstairs”(co-written by himself and David Walker) was #1 throughout Europe in 2007 on both the Christian and the Country charts. “That’s What Christmas Means” recorded by Donny with an all-star cast of musicians including Hall Of Famers Charlie McCoy(harmonica,vibes), Boots Randolph(sax), and James Burton(guitar), was #1 on Europe’s Christmas Charts, 2009. This song was co-written by Donny, David Walker and Randy Smith.

In 2011, Richmond’s recording of “Gospel Jukebox”(written by Walter Cunningham) became the longest running #1 song in the history of the European Christian charts, breaking the previous record set by Vince Gill. 2012 saw Donny’s “I Believe” become the longest running Top 20 song of the year.

Donny’s 2015 international Chart Hit; “The World Keeps Loving Elvis” was recorded with the largest collection ever of Elvis Presley’s former musicians to back up any singer other than Elvis himself. Other unique details about the song are detailed on YouTube. 2016/2017, Donny’s duet recording with country music legend Stonewall Jackson of “JESUS IS MY LIFELINE” once again became an international #1 Chart Hit, now having reached #1 in 3 different decades. In 2019, Donny’s “There Is An Answer” broke the all time record for longevity at #1 on the international Airplay Express Charts. Donny’s recordings have reached #1 in more than a dozen countries.

Donny has appeared in a national or international chart every month for the last 5 years. World famous backup singers, The Jordanaires, are also to thank for Donny’s success, as they have appeared on many of Donny’s hit recordings. 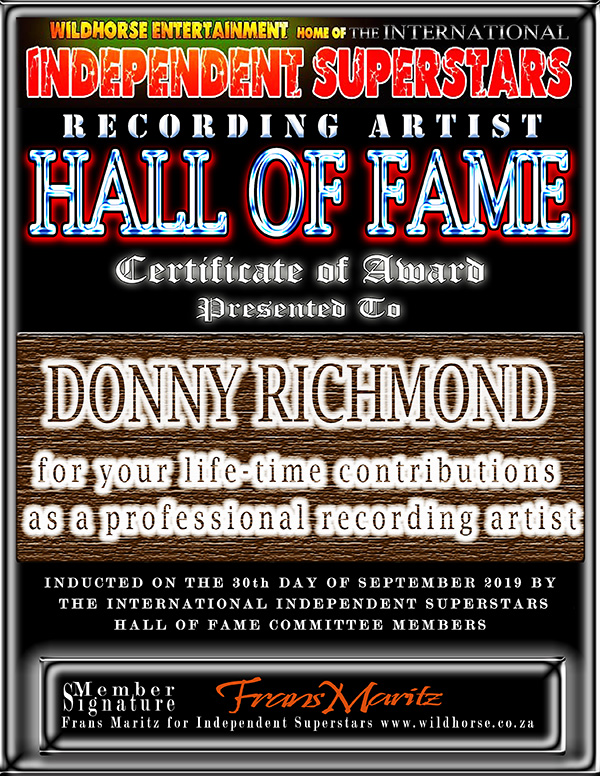