Old Dominion Celebrate The Journey At Sold Out Nashville Show

For Old Dominion, all roads led to Ascend Amphitheater in Nashville on Friday 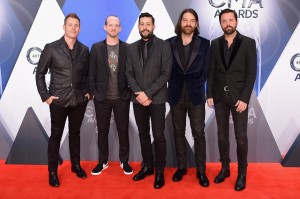 For Old Dominion, all roads led to Ascend Amphitheater in Nashville on Friday (May 3). The five-member band used their hometown show to not only treat the crowd to a vast range of hits, but convey the gravity of what it meant to perform a sold-out show after years wondering if they could transition from successful songwriters to celebrated artists. Opening the show with the upbeat “Be With Me,” lead singer Matthew Ramsey saw it as an opportunity to interact with the crowd, high-fiving as many hands as possible that were gathered in the pit around the stage. This led into the energetic “Snapback” that ended with an electrifying guitar medley between Ramsey and Brad Tursi as Ramsey shouted into the crowd “are you ready?!” signifying that this wasn’t just the beginning of the show, but rather a high-energy prelude of what’s to come.

Before sending several of their own hits to to the top of the charts, the beloved group were individually working as songwriters in Nashville, penning hits for the likes of Blake Shelton, Sam Hunt and Kenny Chesney. “You’re going to hear a lot about songwriting, it’s very near and dear to our hearts,” Ramsey confessed, immediately delivering on that promise by revealing how they wrote “Still Writing Songs About You” about that one person whose memory you can’t escape before launching into the reflective number and jamming to “Hotel Key” as retro neon graphics of palm trees and a hotel pool created an eclectic aesthetic in the background. They stayed in this songwriter vein with a new track, “One Man Band,” as Ramsey and Tursi made the song a moment of musicianship by sharing a single spotlight and microphone as they sang about a man who took pride in living life solo, but felt appreciation in finding someone to live harmoniously with. But the show’s most poignant moment culminated in an intimate guitar pull where Ramsey, Tursi and Trevor Rosen sat front of stage, passing stories between them of their early days in Nashville. Ramsey revealed the band has been in Music City for 17 years, “It took us that long to get here,” he noted, looking out into crowd of more than 6,000 people.

The three singers shared of their humble beginnings, reflecting on the amount of hard work it took to be successful songwriters, all while facing rejection from record labels. In between stories, they traded performances of acoustic selections of hits they’d written like Shelton’s “Sangria” (Rosen), “Make You Miss Me” by Hunt (Ramsey) and Luke Bryan’s “Light it Up” (Tursi). Ramsey acknowledged how songwriting kept them motivated to pursue their dreams of being the main act, and after years of proving themselves as songwriters, they found a label that believed in them as artists, making their first album with 2015’s Meat and Candy.

“Before you guys ever really realized it, you were listening to our music,” Ramsey observed. “Here we are tonight.” The reflective moment was the kind that makes Nashville special, their journey resonating as they concluded the story by launching into fan favorite “Song For Another Time,” the audience loyally singing along as the band paused the music to let their voices fill the amphitheater.

One of the aspects that make Old Dominion so distinct is the uplifting element to their catalogue of songs and their ability to turn a negative situation into positive music. “We discovered that the more people sing this song, the better we all feel,” Ramsey remarked, the crowd proving him right as they sang along to “No Such Thing as a Broken Heart,” singing the words back to them so serenely that it captured the compassionate nature of the song’s message of finding the light in the midst of struggle.

As the evening came to a close with performances of “Written in the Sand,” a cover of Chesney’s hit “Save it For a Rainy Day,” co-penned by Ramsey and Tursi, and an encore of “Nowhere Fast” and “Wrong Turns,” the show felt like an expression of gratitude from Old Dominion for their journey to success and the loyal fans who helped them get there, proving they reached the goal they’ve always been striving for.