SoundsLikeNashville: Country Artists to Watch in 2019 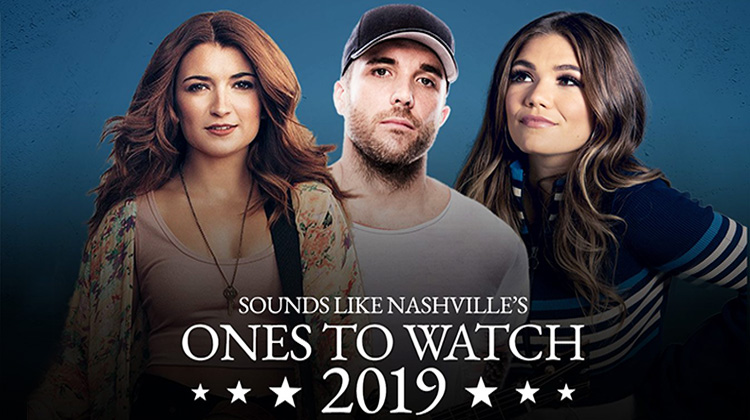 Sounds Like Nashville’s New Country Artists To Watch In 2019

With 2019 around the corner, Sounds Like Nashville has selected some amazing up-and-coming country artists to keep an eye on.

2018 saw a number of new country acts from last year’s Artist to Watch list break through and receive their debut No. 1 songs, including Jimmie Allen (“Best Shot”), Morgan Evans (“Kiss Somebody”) and Jordan Davis (“Singles You Up”). 2019 will likely bring a new roster of chart toppers and we can’t wait to watch their careers take flight.

Texas native Abby Anderson made waves this year with the release of her debut single “Make Him Wait.” The poignant piano ballad penned by Anderson, Tom Douglas and Josh Kerr has the singer reminding the listener of her self-worth before jumping into a relationship. “Before that first kiss, he’s gotta hold your hand,” she sings on the song’s chorus. Her standout five-song EP further showcases the singer’s vocal ability and songwriting chops alongside hints of pop, country and even reggae beats. Having recently made her Opry debut, the Black River Entertainment signee is a promising female voice deserving of radio airplay.

Ingrid Andress moved around a lot as a child and learning piano and writing songs became an outlet. Now signed to Warner Music Nashville, the world is getting to hear more of the singer’s powerful vocals and descriptive lyrics in the form of her heartbreaking debut single “The Stranger.” A tale of a couple trying to rekindle their romance, Andress’ haunting vocals and striking piano accompaniment bring the song’s emotion to the forefront. The latest addition to CMT’s Next Women of Country class of 2019, Andress has had an already successful career as a songwriter penning hits like Vice’s “Steady 1234″ and Charli XCX’s “Boys.”

Kassi Ashton’s star power is immediately evident upon first meeting her. Whether she’s walking a red carpet in her own designs or performing at a writer’s round, her presence is undeniable. Her confidence, coupled with sultry vocals and unique songwriting talents, make songs like “Taxidermy” stand out from the crowd. Meanwhile, the introspective “California, Missouri” further showcases her knack for penning songs that captivate the listener with slowed musical accompaniment and evocative vocals. Thanks to an assist from Keith Urban, plenty of country fans are getting to know Ashton as the featured vocalist on his arena-ready anthem “Drop Top.”

Swiss singer-songwriter Bastian Baker turned heads this year with the release of his fourth studio album and self-titled American debut. Baker’s ear-grabbing falsetto, catchy beats and intriguing storylines make up the majority of the 14-track project. Opening track “Stay” and the mesmerizing “So Low” prove why he was selected as the opening act for Shania Twain’s Now World Tour and further hint that this is only the beginning of the singer’s U.S. story. Having played in over 40 countries over the past seven years, Baker has already put in the groundwork for what’s sure to be an illustrious career.

Tyler Childers’ debut album Purgatory was released in 2017 to massive critical acclaim, and his upward ascent in the music world continued this year when he was named Emerging Artist of the Year at the 2018 Americana Music Association Honors & Awards. The Kentucky native has extended his headlining tour into 2019 and proves a must-see live act to those pining for traditional country music. While he’s already been accepted into the Americana community, Childers’ country influence is indisputable. “It’s not about rock, or ‘grass or country…it’s just hollerin’ in the mountains and stirring shit up!” he says of his Sturgill Simpson-produced debut.

Cale Dodds’ infectious energy and unyielding charisma is showcased in both his latest song, “Where I Get It From,” and the previously released “What We Gonna Do About It.” Both display the Georgia native’s swagger and penchant for writing sing-along choruses. The Warner Music Nashville recording artist has been releasing new music sporadically throughout 2018, and each track exudes a feel-good vibe. The new music isn’t the only indication of this rising star’s power. His lighthearted vibe and likable personality are showcased in his “Cale Cam” video series, which gives fans a behind-the-scenes look at his everyday life on the road and recording new music.

Lauren Duski has had fans anxiously waiting to hear her first single since being named runner-up on last year’s season of The Voice. The Michigan native proved her unmistakable talents with the vulnerable “Costume Party,” released over the summer. With props from Maroon 5’s Adam Levine and a tour with radio personality Bobby Bones in August, her music has been well received and rightfully reaching the masses. Follow-up song “Heart Hurt Good” continues to showcase her vocal prowess and promises that there is much more to come from the budding singer-songwriter.

This Kentucky native pours her heart out on her 2017 self-titled EP. A versatile release, the heartbreaking piano ballad “Never In Love” details the aftermath of a relationship when the girl realizes her boyfriend never loved her, while “Temporary Feeling” highlights Hannah Ellis’ mesmerizing rhythmic singing style. The catchy “ILYSoWhat” and latest release “Home and a Hometown” are sure to be crowd favorites in a live setting, and audiences will get to witness her budding star power up close next year as she joins Cassadee Pope and Clare Dunn on the 2019 CMT Next Women of Country Tour.

If the singers from Gone West look familiar, there’s a reason. The newly formed Nashville quartet includes Grammy Award-winning pop artist Colbie Caillat and her frequent songwriting collaborator Jason Reeves, as well as ACM and CMT-nominated Nelly Joy and singer-songwriter Justin Kawika Young. The group promises new music in 2019 and if the inspiring “This Time” is any indication, their mesmerizing harmonies, descriptive lyrics and memorable melodies will be a welcomed addition to country radio.

Riley Green is enjoying his first top 20 hit at country radio with the feel-good “There Was This Girl.” A song that details the stupid things he’s done to impress a girl, the infectious tune highlights Green’s vocals and introduces him as an adept songwriter within the genre. His four-track In A Truck Right Now EP is a hint of what fans can expect from the Alabama native’s forthcoming debut album, and his in-demand 2018 Outlaws Like Us Tour showcased exactly why he’s a star on the rise.

Adam Hambrick’s smooth vocals and pop tendencies bring to mind that of pop artists Shawn Mendes and John Mayer. With sing-along choruses and soaring melodies that stick in the listener’s head, he’s already proving his staying power with the infectious and sentimental debut single “Rockin’ All Night Long.” No. 1 hits for Dan + Shay (“How Not To”) and Justin Moore (“Somebody Else Will”) have already showcased his songwriting ability, and now fans will get to hear more from the singer when he releases his debut album next year on Capitol Nashville/Buena Vista Records.

HARDY grew up on classic rock, a fact that is sonically apparent in his distinct brand of country music. A blend of country and rock influences embody his boot-stomping debut EP This Ole Boy, specifically on songs like the bombastic “Rednecker” and the autobiographical title track. His recent signing to Big Loud Records/Tree Vibez Music isn’t the only highlight to HARDY’s memorable 2018. The singer-songwriter has already garnered two No. 1 hits–one with 2019 tour mate Morgan Wallen (“Up Down”), and one with Florida Georgia Line (“Simple.”)

Lauren Jenkins’ powerhouse vocals and descriptive songwriting make her one of the most intriguing new voices within the country genre. Her smoky vocals on “Maker’s Mark and You” and standout songwriting heard on “No Saint” make her a double threat. A mix of country roots and Americana influences makes Jenkins a breath of fresh air on the scene and the airwaves, and her forthcoming 2019 debut album No Saint will surely cement her stay in the country genre.

“The Difference” singer Tyler Rich toured in bands for most of his 20s before making the move to Nashville. Since relocating to Music City from California, Rich has seen radio success as his debut single “The Difference” hit No. 1 on SiriusXM’s The Highway. Thanks to a tour with fellow Californian Brett Young, and the release of his debut self-titled EP, Rich is poised for the spotlight. Heartfelt songs like “Adrenaline” and “11:11″ prove that he is no one hit wonder, and country fans will likely hear much more from him in 2019.

Australian duo Seaforth inked a deal with RCA Records Nashville earlier this year and it’s easy to see why. The band’s spot-on harmonies heard on “Talk to Me” and the pop-country flavor they bring to “Love That” at times recalls Dan + Shay. Seaforth’s Tom Jordan and Mitch Thompson met in kindergarten and have been friends ever since. Fittingly, their band is named after the town they grew up in. Seaforth promises versatility as both members alternate sharing lead vocals. With the goal of putting their own stamp on country music, Seaforth are currently working with Dann Huff for their debut project.

After abandoning solo careers, Alyssa Bonagura and Ruby Stewart teamed up to form the Sisterhood Band. The duo’s striking harmonies, Americana vibe and impressive songwriting chops come together on their standout 2018 EP Summer Setlist. “Walk Away” leaves a memorable mark as does the uplifting “Doors,” but it’s “Half Way,” the rollicking kiss-off to an ex, that truly exudes their star power. While readying to release their Sony Music Nashville debut in 2019, the women have found a fan in Steven Tyleras they joined him for his international summer tour with The Loving Mary Band.

Tenille Townes has a voice well beyond her age and musical storylines that leave a mark. The 24-year-old Canadian-born singer-songwriter made her first public appearance at the age of nine when Shania Twain invited her on stage. Since then, she’s been honing her songwriting skills, and tracks like the reflective “Jersey On the Wall – I’m Just Asking” and the striking “Somebody’s Daughter” have garnered major attention and resulted in her being named CMT’s Next Women of Country class of 2019. With her Jay Joyce-produced debut album coming soon and a tour with Dierks Bentley lined up for next year, this is just the beginning for Townes.

Rachel Wammack introduced herself to the country world earlier this year with her stirring debut single “Damage.” The 24-year-old Muscle Shoals native followed up with an EP of four standout songs, including the heartbreaking “Hard to Believe” and memorable “Closure,” both of which showcase her mesmerizing vocals and emotional songwriting ability. A much needed female voice on country radio, Wammack’s poignant piano ballads are an introduction to an already bright future.