Another Promise Made To God And Broken By Most 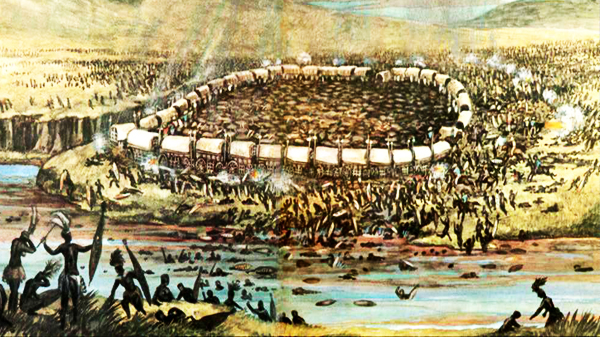 “The Day Of The Covenant”

Here we stand before the holy God of heaven and earth, to make a vow to Him that, if He will protect us and give our enemy into our hand, we shall keep this day and date every year as a day of thanksgiving like a sabbath, and that we shall erect a house to His honour wherever it should please Him, and that we also will tell our children that they should share in that with us in memory for future generations. For the honour of His name will be glorified by giving Him the fame and honour for the victory.

The Article below was first published on WHISNews21 in 2012

since then the situation worldwide has just gotten worse

as told by Evan Davies 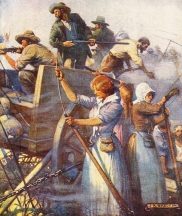 On Dec 16 at 6a.m., 464 Boers saw from their laager through the early morning mist, the first division of a Zulu army sitting quietly in a semicircle, 100m deep. The Boers nearly lost their nerve.

Under the command of Ndlela and Nzobo, the 16 000 strong army had been commanded by King Dingane to “find the Boers before they enter the heart of my Kingdom, and eat them up.”

Besides the Boer combatants the laager was crammed with people and animals. The 130 or so wagon drivers and leaders tied their teams of oxen head to head and pegged them to the ground and talked soothingly to them throughout the battle. The approximately 200 grooms held the terrified horses in fours.

The Zulu leaped as one to their feet, whistled, drummed their short heavy spears against their ox hide shields and rushed the laager chanting their war cries. It was a sunny day, and the Boers’ powder remained dry, and the laager was soon obscured by a rising cloud of black smoke. So rapidly did the defenders have to fire that there was no time to ram the charges into the muskets.

By 8a.m. some 500 Zulu dead lay dusty and trodden. The first division, known as the uDlambedlu regiment, refused to face the fire any longer. The main body of the army, the umKhulutshane and the iziGulutshane regiments, moved up.

They made repeated and determined efforts, and before their attack faltered the third division arrived in their rear and began taunting them with cowardice, and pushing through their ranks, driving the front ranks on to the laager.

But by 11a.m. the Zulu assault broke down in futility. Immediately a mounted Boer force of 160 sallied out and cut the army in two. A large part tried to hide in the reeds of the Ncome river, but marksmen picked them off to a man. It was to be known after as the Battle Of Blood River. The pursuit continued until the horses were exhausted. According to a Boer witness, the Zulu dead “lay on the ground like pumpkins on a rich soil that had borne a large crop.” That no Boers were killed was taken as a sign from God of the rightness of their cause, and gave thanks to God for the miracle of victory.

It is believed among the Boers of today that God is punishing them because they have forsaken their holy Covenant made with God and it is not being celebrated anymore by what is left of the nation. As in America and the world, people are turning away from God, and because of this, terrible things are happening, things that people who don’t believe in God don’t understand. The Boer Nation of today is the only nation on earth without their own country where they can live in peace and practice and preserve their own heritage. All nations in South Africa have their own part of the country which they identify with, yet the Boer Nation has no place to call home. South Africa is not the Rainbow nation the world believes it is. The mighty propaganda machine that has been focused on the Boer Nation for so long is still making sure that the world believes that everything that is happening to the Boer (which according to the majority of the SA population, includes all white people, even foreign ones)  now is because they deserve it. The Boer Nation who are mostly Christians can have their children, Sons, Daughters, Mothers, Fathers, Grandfathers, Grandmothers  raped, beaten, stabbed, disemboweled, impaled, burned and tortured to death and still the propaganda machine makes sure that the world overlooks this as punishment. It has become very clear to me over the past few years that all this is happening because we are still Christians, and we can be gotten rid of very easily as the world is looking the other way.

I used to believe that America will one day realize what is really happening here and save us, but today I am really sorry to say that America is going down the same path as we have and that America now needs to be looking at saving themselves as they are being attacked from within right now, and it seems as if it is not going to stop. Their latest disaster was from one of their own, and how do you defend yourself against your own people. America you are still the hope of the free world, we need you to be strong. and we pray as hard for you as we do for ourselves. – 2012

When God is deserted Evil Takes Over, God is Good, Evil Is Bad.

The Message the World Needs to Hear

Suppose I asked what the mission of the church is—how would you answer? Although the church accomplishes many tasks, its only message to the world is the gospel of Christ. Everything else we do is merely an extension of that primary goal. The gospel we offer the lost is superior to every worldly philosophy. Never outdated or in need of correction, it is always sufficient to meet humanity’s greatest need: reconciliation with the Creator.

Although the message is always the same, methods of making it known are many—including the spoken word, music, printed material, and electronic media. But all these avenues of communication require the individual involvement of God’s people. It is every Christian’s responsibility to use his or her spiritual gifts, talents, and abilities to help fulfill the Great Commission.

Some Christians think that this role is given only to pastors, missionaries, or other people with an “up-front ministry.” But all of us have the responsibility to be involved in whatever way we are able and in whatever opportunity God gives us. Not everybody is called to go abroad as a missionary, but we all can give, pray, and tell friends and family what the Lord has done for us.

When you’re truly committed to getting the gospel out, God will reveal what work He is calling you to do. He has a place for every one of us—nobody is insignificant or unusable. The limiting factor is not the Lord’s ability to use us but our availability to His call.

Used with permission from In Touch Ministries, Inc. © 2009 All Rights Reserved.