A couple of days ago I was in a dark mood, sitting on a bench at Publix,

waiting for Misty and watching people check out.
A little girl 5 or 6 years old said, “I’m going to sit by you.”

She sat and talked with me for about 5 minutes.

She held a small black purse with two straps,
and she didn’t deal in affectations or childish cuteness,
but looked directly into my eyes and conversed person-to-person.

She turned and took a closer look and asked “Do you have make-up on?”
I said no and she said, “A beard.”
I said “Yep” and she said, “Why?”
I said, “Style, I guess.”
She accepted that, and pointed at my longish hair.
I said, “I’ve got to cut that hair.”,
and she said “No! Long hair is nice.”,
running her fingers through her blond hair to illustrate.

A lady shopper stopped and told her, “You’re so pretty!”
The little girl just smiled her thanks.

Misty appeared with her shopping cart.
She smiled and said, “I see you have a friend.”
The little girl said, “Go!” to me,
as if people should go when their parents are waiting.
I said I’d probably stay seated there.
(I was having a bad hip day. An old Disco injury.)
She asked, “Why?”
I told her I liked to watch the people, and she thought that over.

Then her mother came by and they walked away.
She turned and waved and called “”Bye”.
She made me happy!
I won’t forget her. 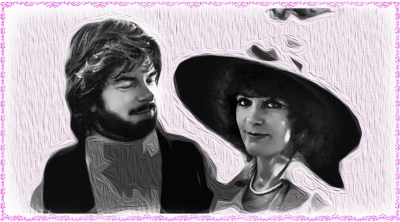