Irlene And Her Unwavering Support For Our Nation Is Beyond Compare 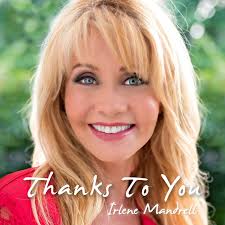 Irlene Mandrell, the youngest of The Mandrell Sisters, has released her debut solo album, Thanks To You, on Reviver Records. This Patriotic project delivers Irlene’s heartfelt message to our nation’s military, veterans, law enforcement and first responders, and praises them in their vigilant fight as they continue to risk their lives on behalf of our freedom.

“This album is dedicated to our military, our law enforcement, our first responders, and everyone who works tirelessly to keep us safe and free,  You are our heroes, and we thank you for everything you do!” says Mandrell.

Irlene is no stranger to the spotlight, with television credits including Barbara Mandrell & The Mandrell Sisters, Hee-Haw, The Love Boat, and more. Irlene is also a gifted musician and a Country Music Hall Of FameWalkway of Stars inductee.

Even more admirable than her illustrious career is Irlene’s desire to dedicate her platform to elevating a message for our nation. Thanks To You promotes a rejuvenation of national unity and respect for our heroes through her songs.

Reviver Records, LLC CEO and President David Ross states, “Irlene and her family are woven into the fabric of country music, and her unwavering support for our nation is beyond compare.”

Thanks To You was produced by producer/engineer, and Irlene’s husband, Pat Holt, whose credits include Johnny Cash, June Carter Cash, The Judds, Doctor Hook, Keith Whitley, and Alabama, among others.

Featured on the album are Irlene’s three children, Deric, Vanessa, and Christina, establishing this album as a familial salute to our nation’s heroes.