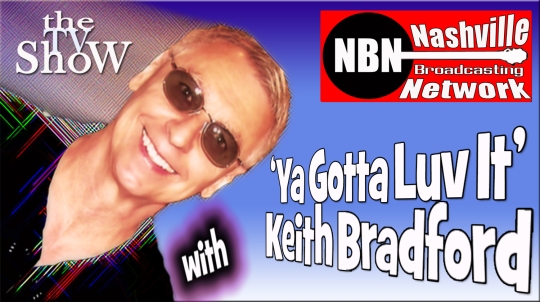 This is a brand new show produced in the Nashville studios of The Nashville Broadcasting Network. “Ya Gotta Luv Tv Show” show is hosted by Keith Bradford and his guest this week is none other than Independent Country Superstar Marge Miller.

Marge discusses her music carreer with Host Keith Bradford as she talks about her chart success on AirplayExpress among other things…..”Ya Gotta Luv It” is yet another original production from the Nashville Broadcast Network on WETv

ACTOR WITH THE RIGHT STUFF EXITS STAGE When we attempt to list the many talents of actor Sam Shepard, we almost run out of superlatives. Playwright/actor Sam Shepard Pulitzer Prize-winning author of plays, screenplays, stories and memoirs, whose rugged good looks and crusty style make unforgettable screen roles. On November 5, 1943, Samuel Shepard Rogers III is born in Fort Sheridan, IL grows up in Cody, WY and Duarte, CA. On Thursday, July 30, 2017, actor Sam Shepard passes away at 73 from ALS.

CUMULOUS JOINS VINCE WITH MARY IN THE MORNING Vince Coglianese, former editor-in-chief of The Daily Caller and regular guest on the FOX News Channel, CNN, MSNBC, FOX Business Network and CNBC is new co-host of WMAL-630 Washington, DC Mornings On The Mall morning show with current co-host Mary Walter weekdays from 5-9 am. Vince replaces Brian Wilson, who exits WMAL-630 at the end of May 2017. Earlier, Coglianese hosts a Talk show on WTKF FM (107.1) & WJNC-1240 Jacksonville, NC.

AMANDA’S STAR STILL SHINES Robert Lee [Bob] McDill is born April 4, 1944 in Walden, TX. Bob writes one of our favorite tunes, Amanda, with hit versions by Don Williams (1973) and Waylon Jennings (1979). Singers record more than 300 of his songs, 31 are #1. McDill wins 37 BMI Awards, 17 ASCAP Awards. Bob McDill retires from songwriting in 2000, donates personal collection to Country Music Hall of Fame and Museum, including all 217 legal pads of handwritten lyrics, 110 awards and plaques and his Martin 1967 guitar.

TRIVIA QUESTION: What is the first all-Elvis Presley radio station? The answer appears below.

GARY DELAUNE [KYTY-810/ex KLIF-1190 news/KENS TV CH 5 Sports Director] (San Antonio, TX) Subject: Jim Rose Remembers Radio. Keep up the good work; For your info; Blanquita Culllum, who worked in SA radio for years and went to D>C. as director of “The Voice of America” and traveled the world, had been doing a radio show with Bruce (Hathaway) before he passed. He and I had been on the air for ten years. Beginning next Saturday 9-11 am on Saturday mornings, Blanquita and I will launch “Lonestar Saturday” on KYTY Star 810 am and http://www.Star810.com. News, sports, interviews, political commentary and well known guests…She has so many contacts in D.C. and we are asking Sean Hannity and other personalities to be on with us. I’ll do a segment with “Where Are They Now”….the former Spurs. It should be fun. Thanks for the mention. Gary D. (www.garydnews.com)

MIKE MARSHALL [former DJ on KNOK-970, KBOX-1480, KFJZ-1270, AFN-BERLIN, WFAA-820/570, KPRC-950, KXYZ-1320, KULF-790, KQUE FM, KBME-790] (Houston, TX) Subject: WFAA. I started at WFAA doing weekends and production during the week when Charlie hired me from KFJZ and went to 4-7 afternoons. When I returned from my first vacation in the summer of ’68 (I drove to Montreal to see the Italian lady I would marry in December) Charlie told me he had hired Lee Douglas who filled in for me while I was gone and would now be doing afternoons. I was to be the new all-night guy. I remember doing it from that little third studio across from production but I can’t remember why. I had to load the FM automation when I finished my shift. I think Rex Russell (Boehme) replaced me on all nights when I went to 7-midnight. Mike

TRIVIA ANSWER: On August 1, 1988 WCVG-1320 Cincinnati, OH is the first all – Elvis Presley radio station. The format sticks around for a little more than a year.

CHARLES GEORGE [KC5RAI ham radio, ex KCHU FM] (Dallas, TX) Subject: Lou Rawls Tribute. Lon Dorsey has been doing a show at Casa Cavazos a Family Owned Mexican Restaurant. For me is good since it is just across the street from my apartment. He and his band do a Tribute to Lou Rawls. I went for the last hour of his show, Thursday with my neighbor Ruby. He mentioned a show on KLIF 570 to be on Saturdays. He has a page for Lou Rawls Fan Club on Facebook. 73, Charles, KC5RAI