Who’s New: Get The Scoop On Parker McKay

Who’s New: Get The Scoop On Parker McKay

The Scoop: After growing up in the Northeast and honing her stage skills in New York City, Parker McKay moved to Nashville in 2014 to pursue a career in country music. In her two years in Music City, Parker has written more than 150 songs, strumming her guitar and singing at numerous songwriter rounds, including gracing the stage with artists such as Maren Morris and Natalie Hemby. On August 12, Parker will release her self-titled debut EP, which features six songs that she co-wrote, including the single “Rolling Stone.”

Carpool Karaoke: “More than any person I know, I was exposed to music by my mom just singing in the car. I know that’s a memory almost everyone has, but I feel like we did that so much more often. I guess it’s because we were driving all the time. My mom was a church singer and my dad actually has this really beautiful voice that he’ll joke-sing Frank Sinatra but he sounds incredible. Growing up, my mom and I listened to Sheryl Crow, Faith Hill, the Dixie Chicks, and I listened to all the divas like Celine Dion, Mariah Carey, Whitney Houston. I always just imitated them. I grew up imitating those strong ’90s females like Sheryl and Bonnie Raitt. I kinda built my musical sensibilities from that.”

Life’s a Stage: “I’ve wanted to be a singer since I could form a thought—that or a figure skater [laughing]. I always knew I wanted to sing. It was never a question for me. I did my first talent show at age 8 and ever since then, anytime I could get a microphone in my hand, I did. And I did choir and theater—I studied theater in New York. I’m so glad I did because it has given me such a sense of empowerment because I’m so used to accessing my emotions and you have to have a huge stage presence when you’re in a show. So it’s given me a lot of confidence and let me kind of grow a stage persona.” 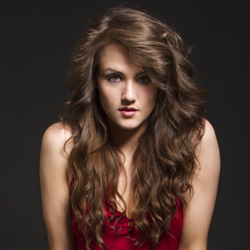 Making the Rounds: “I went to every open mic and met everyone I could when I moved to Nashville. And I asked them to introduce me to friends. I fell into a cool group of people. My most important thing was I felt like I needed to write every single day. For the first year, I wrote six days a week. It’s amazing because writing is like a muscle that you have to use. One day I wrote this one song, and it just started making sense for me. I understand the structure. Now I can crank them out and get them done a lot more efficiently. The process is such a groove thing.”

Finding Her Sound: “I think a big mistake artists can make is to put out music just to have content. And a lot of artists are striving to sound like what’s on the radio, and I think that’s a big mistake. You can get lost in the shuffle, even if you are something brilliant and amazing and new. I wanted this album to open a door to the evolution of country. I think a lot of really amazing country elements have been lost lately in a lot of popular music, and I want to bring back some of the rock sensibilities a little bit and the rawness and grittiness of that. I want it to be real and new.”

Like a Rolling Stone: “The idea for my single ‘Rolling Stone’ came about because I had a couple of friends [T.J. and John Osborne of Brothers Osborne] get nominated for a Grammy and I was just sitting there thinking about that one day. About how hard they’ve worked and the road it took them to get there, and how long it’s been for them. It’s just such a huge, iconic thing, and then I was thinking about some of the other things that happen like that—Grammys, gold records, big milestones like being on the cover of Rolling Stone—and it was one of those songs that just came to me, the melody and lyrics. I went into a co-write with it that day and it just came out. It’s about the love of music, but more so about how it’s a driving force in life and nothing is as important as your passion.”