Now To Speculate About Why Nashville Was Cancelled 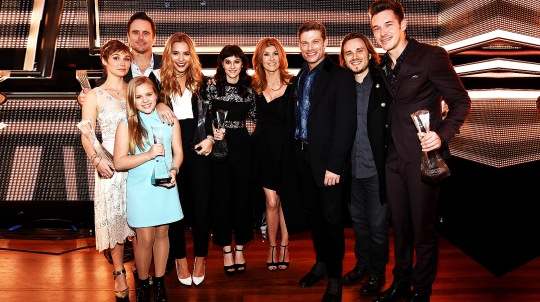 Now, to Speculate: Why Was ‘Nashville’ Cancelled?

With the sad news that ABC has cancelled Nashville fans have been speculating as to the reasons why the network so abruptly pulled the plug on country fans’ favorite. (It’s probably better as Nashville has sold most of its soul already and one more series may have finally done it)

The news came as a particular shock, since there had been some recent indications that the show might get the green light for a fifth season, with some new behind-the-scenes people working on potential storylines.

The news led upset fans up to post all kinds of theories online, starting with the notion that the show had faltered in the ratings because it had been “promoting the gay agenda” with a recent storyline about an openly gay country singer.

Some viewers also allege that some of the “liberal” actors in the cast might not have wanted to shoot and live in Tennessee anymore in the wake of recent legislation that series star Connie Britton called “un-American.” Gov. Bill Haslam signed house Bill 1840 into law in April, allowing counselors and therapists to deny service to potential clients who they feel would violate their “sincerely held principles,” which many feel can be interpreted as denying counseling services to LGBT Tennesseans.

As entertaining as it can be to read online rants, in the end Nashville‘s demise probably comes down to the same thing cancellations always come down to: money. The show teetered on the brink of cancellation for several seasons, kept alive by having part of its production costs offset by money from the city and state, as well as DVR numbers and additional revenue from online sales of the music from the show each week.

Season 4 wasn’t easy. Hayden Panettiere was absent from the screen for a lot of the year while she dealt with postpartum depression, and while the writers tried to work that into her character, it wasn’t an especially rewarding story arc for viewers.

“In the end ‘Nashville”s demise probably comes down to the same thing cancellations always come down to: money.”

The Nashville writers didn’t help things by introducing some unpopular storylines about an openly gay country singer facing open hostility from family-minded country music fans and programmers, as well as Maddie Conrad — played by Lennon Stella — suing her mother, Rayna Jaymes, for emancipation so she could get out from under her record deal, among others. When the star-crossed love of Deacon Claybourne and Rayna was the focus of so much of the show in the past, fans could see themselves in that couple and root for them, but it’s hard for most viewers to look at the TV and say, “Man, don’t you just hate when your teenage daughter sues you for emancipation so she can sign with another label?”

This year took away fans’ happily-ever-after fantasies for Deacon and Rayna, too, by seeing them finally get married, only to immediately go into one unhappy crisis after another. In the end, that may have been the thing that finally did Nashville in … watch this show week after week, and eventually you might think, ‘Wow, it’s a lot of hard work to watch this show and find something to be happy about; maybe I’ll watch something else.’

And so we say goodbye to Nashville, unless it’s picked up by another network … but the show will always live on in the hearts and minds of its fans, and in syndication.

Powerhouse country star, Jennifer Nettles, chats about motherhood, facing her critics, and why women need to champion each other in the June issue of Redbook, on newsstands May 24th. In the issue she opens up about taking risks and learning to love who she is now. 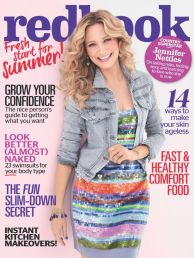 With a new album just released and a newfound fearlessness, she’s positively inspiring. Here’s a sneak peek of what the June cover star had to share.

A self proclaimed perfectionist, Jennifer has had to let go and become more laid back after becoming a mother.

“I’ve learned how my own perfectionism can cripple me. I’ve learned how sleep deprivation is the first line of torture and how you’ll do or tell your kid anything to get him to sleep…One thing I know for sure– this motherhood thing is not for sissies!”

“I feel inspired and fearless. I’m also no spring chicken. Time is of the essence,” Jennifer says about entering her 40’s. “I’ve gotten very aware of my age and where I am in my life… Sometimes when I’m all dressed up, with a bunch of makeup on and wearing some sexy outfit—that maybe I shouldn’t be wearing at 41—I say, “I’m doing this now because soon my neck is going to be hanging where the cleavage should be!”

“When I look at the leaders of the world–the majority of whom are still men– I think there could be some very wonderful, creative problem solving if women were allowed to be heard. And I think it’s important to not only demand that but to show the world what women can do.”

You can read more in the June issue of Redbook.

You Can Break the Cycle – Part 4

So the man went and washed, and came home seeing. John 9:7

Sometimes Jesus healed sick people by speaking to them, other times He laid His hands on them. But this blind man’s healing was not the work of a moment; it was the result of a process. ‘…He said to him, “Go, wash in the pool of Siloam”…So he went and washed, and came back seeing’ (v. 7). Question: How far away was the pool of Siloam? For a blind man, any journey is a long one. Picture this man with mud in his eyes, trying to navigate his way to the pool of Siloam. There’s an important lesson here. Even when God touches us, sometimes we’ve got to walk with our mess until we get to the place of healing, freedom and deliverance. Here’s another thought. Whoever told this man about Jesus, and brought him to Jesus, had to keep walking with him until he got his sight back and could walk on his own. You can’t say to someone who’s struggling with a problem, ‘I told you about Jesus, and I even brought you to church but you’re still stumbling around in darkness bound by the same problems, so I give up.’ God never gives up on people, and we must not give up on them either. When someone continues to struggle with an old habit, some Christians say they mustn’t really be saved. Question: How often do you give in to resentment, pride, lust, greed, gossip, etc.? The list is endless, yet God doesn’t give up on you. Sometimes people have to ‘walk out’ their deliverance and healing until it fully comes to pass. That’s how long you need to love them, believe in them, pray for them, and keep working with them.

help me not to give up on people but to be patient and walk with them through recovery.