TOPEKA IS LESS RICH For 16 years, Richard [Radio Rich] Bowers and Louann Fulmer are a popular Topeka, KS radio duo. For a decade, Radio Rich and Louann co-host a show on Country WIBW FM (94.5) plus six years on KQTP FM (102.9 US103). Until Cumulus drops its axe in 2008. Joey Little, (Joey Baggz), tells The Capital-Journal: The thing about him that I noticed was his love for his listeners. He really cared about his listeners. On Tuesday, ‎May ‎10, ‎2016 Richard [Radio Rich] Bowers passes away at 60.

HUBBARD SENDS TORPEDO TO SOLK On Tuesday, May 10, 2016 a surprise move by Hubbard Radio President/CEO Drew Horowitz when he immediately removes its national Senior Vice President of Programming, Greg Solk. In 1977, when he is just 15 years old, Solk begins his radio career in Chicago, IL as an intern on WLUP FM (The Loop). By the time Solk is 19, he becomes Assistant Program Director. When he is just 21 years old, he is WLUP FM Program Director. In 2010, Solk is Hubbard Senior Vice President of Programming.

IHEART TRIMS STAFF MARKET BY MARKET On Monday morning, May 9, 2016, listeners to iHeartMedia-owned News/Talk WHYN-560 Springfield, MA witness iHeart’s latest guillotine. The Jim Polito show replaces the local Adam Wright and Bo Sullivan program from sister station about 50 miles away, WTAG-580 Worcester. Gradually, iHeartMedia trims its roster market-by-market over the past month or so, instead of large cuts at the end of the year. Bo Sullivan is with WHYN-560 for more than 20 years.

WEATHER SERVICE STOPS SHOUTING For more than a century the National Weather Service stops reading like angry Internet swagger. Suddenly overnight Tuesday, May 10, 2016, the National Weather Service finally stops yelling. After more than a century of weather forecasts in all capital letters, the agency publishes without all caps. During the 2013 federal budget shutdown, a forecaster at the agency’s Anchorage, AK office sends out a forecast with a hidden message in the first paragraph: PLEASE PAY US.

TRIVIA QUESTION: What is the first radio station to test for the first directional antenna in the U.S.? The answer appears below.

DEBBY BARNES [Voice Over Talent] (Cotswolds-Oxfordshire, England) Aww…thanks for the clarification, Jim. But I think it’s prudent that I bow-out for now as I’m gearing-up for an international relocation. After living as an American in the UK for many years, the time has come for me and my family to move back home, so you caught me on the heels of taking a three month leave-of-absence. I’m a fairly ‘young VOT’ as well, and have yet to land a national spot. But I’m hoping it’ll be just a matter of time! Thanks again for inquiring, though. All The Best Now & Always, Debby Barnes VoiceOvers The Read You Need (www.debbybarnes.com)

JAY WALKER [CBS Radio Dallas/KJKK FM/Infinity KTSA-550/KTFM FM/Own Jay Walker Prod/40 Plus Years In Radio] (Dallas-McKinney, TX) Jim Came across this bit of bad luck from last night’s storms here in Texas and north of the Red River. KHKC-FM Atoka Oklahoma took a direct hit from a tornado last night. Thankfully there were no injuries or deaths at the station, however others in the area were not so fortunate… Jay (www.kxii.com/home/headlines/Radio-station-suffers-direct-hit-by-tornado-378741341.html)

BILL CHERRY [Realtor, In late 1950s Music ’til Dawn host on WWL-870] (Dallas, TX) Subject: Jim Rose Remembers Radio May 13, 2016 [Friday] Issue #1511. Jim, I played the piano for 6 weeks at the Blackstone Hotel across the street from the Palmer House where Mr. McNeill broadcast the Breakfast Club program in those days. That was about 1963. It was in February and very cold in Chicago. I’d walk across the street a couple of mornings a week for the broadcast. It was fascinating. Didn’t he also broadcast it on the old Dumont TV network for awhile? Bill

TRIVIA ANSWER: On May 9, 1932 WFLA-970/WSUN FM [Why Stay Up North] (97.1) Clearwater, FL tests 1st directional antenna by a commercial broadcasting station in the US.

CLAUDE HALL [Former Billboard magazine Vox Jox columnist] (Las Vegas, NV) Subject: Vox Jox. Each Monday, Rollye James Cornell & Claude Hall produce a watering hole for radio and music Men and Women To read: www.voxjox.org/ Please tell friends that might be interested! To subscribe: voxjox-subscribe@voxjox.org By subscribing, we avoid being tagged spam when we need to reach you. We promise to keep your email confidential! Just FYI, we’ve helped countless old friends get back in touch. Whatever … please tune in!

JOHN WALTON [Walton & Johnson Show-KKRW FM] (Houston, TX) I never met (Bill) Ham…it was Gibbons and Hill I drinking the beers with…that’s when they had no beards and cowboy hats…When I was program director of KTSA in 1980 a kid came in with a record in a cellophane sleeve on Saturday when I was in my crappy little office … “Man I’ve grown up with KTSA …play my record and I will never forget you…” I said sure kid and I tossed it on the stack after glancing at the title when he left…I never gave it another thought until about two weeks later a song title that debuted at #3 on the Hot 100 rang a bell with me…then it hit me…I dug down to the cellophane wrapped 45…”Ride Like The Wind” Christopher Cross. the next year he won 9 Grammys… I’m pretty sure he forgot me because I didn’t add it until that day…whoops…always listened to new unknowns after that…but another opportunity like that never presented itself…Lee Randle and Joe Ernest laughed their azzes off at my fumble...

Wyn Machon Tell’s It Like It Is On WHISNews21

Wyn Machon Tell’s It Like It Is On WHISNews21

Well to day I will change tack, and not be negative, hard for me I know. As you know I mentioned a lot about slow dreary songs, Well every now and again I will be going through songs sent by mp3 or on a cd ,when all of a sudden your mind kicks in as you take in the words of the song plus the rhythm.

Its then you know you are hearing a special song, one that is going to have listeners asking to hear it more. I love it when one of these songs hits the air ways and my phone rings straight after the song finishes and I get, Wyn that song you just played is wonderful the words are simply amazing. What else can you say but thank you and glad you enjoyed it.

The biggest problem is that these wonderful songs are so few and far between. No! I am not going to mention songs or writers by name as that would not be ethical, but for me these songs go into a special folder called, and strange as it may seem, My Special Songs.

Have great week and may the sun always shine on you .. cheers Wyn

Now Available On WHISNews21 With Luanne Hunt 2nd week at #1

This weeks Top 20 has once again proven that when artists promote their song with a little bit of extra effort it pays off big time. AirplayExpress sent out a special promotion for Independent Superstar Luanne Hunt Friday the 6th of May, and within 48 hours Luanne had over 200 downloads from DJ’s and radio professionals worldwide downloading her songs. That promotion is still proving to be working as she holds on to the #1 position on this weeks  AirplayExpress Top 20 .

Luanne Hunt at #1 Two Weeks In a Row

Luanne is the first AirplayExpress artist to take advantage of this special promo package which is extremely affordable and is gauranteed not to  make a dent in your pocket no matter how hard you try. The rewards can be seen on the chart below. For more details on this special promo mail us at airplay@whisnews21.com

Please note the songs below are not linked to the downloads as these songs can only be downloaded by AirplayExpress members being Disc Jockey’s, Radio Station, Promoters, Artists, Recording Companies or fans who have permission from their Idols. You are invited go to the AirplayExpress  web site and register as a member and add your profile free for now as the window for that will close June 30th, 2016. AirplayExpress delivering Your Music Worldwide. 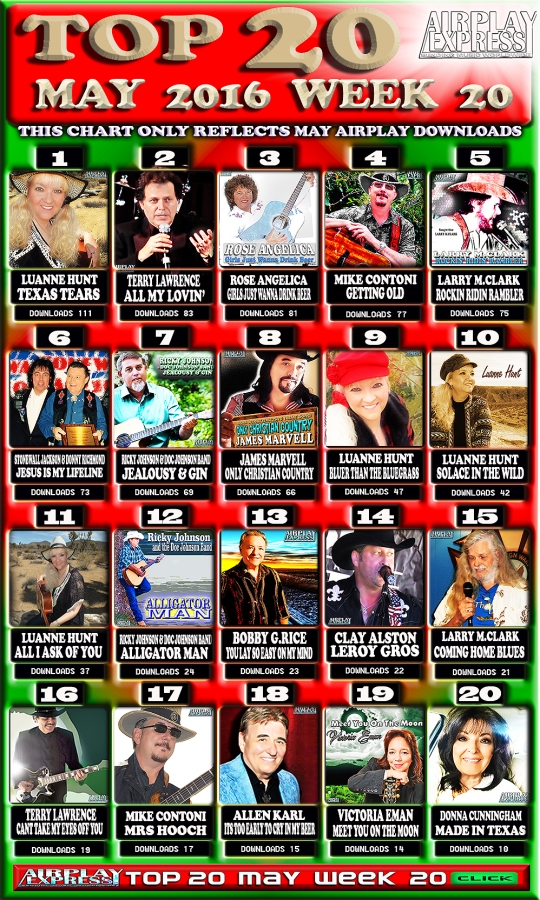 Show That You Care Today

My command is this: Love each other as I have loved you. John 15:12

Take a deep breath, and hold it for a moment. Now exhale it. Where did it go? The air that you just exhaled will circle the globe in the next twelve months, during which time each of the molecules you exhaled will be breathed in by someone else only to be exhaled again. In this way we are all linked to each other, we are all connected by our breath to each other and to the One who first breathed life into us. Just as we all share our chemistry with other members of the human family, so we are all interdependent. We’re affected positively or negatively by the actions of each other. During the self-centered days of what used to be called the ‘Me Generation’, it was common to hear people say, ‘As long as I’m not hurting anyone, it’s nobody’s business what I do.’ Unfortunately, everything we do affects other people, and there’s no such thing as a completely independent act. The poet John Donne wrote, ‘No man is an island, entire of itself, every man is a piece of a continent, a piece of the main.’ With that in mind, read these two Scriptures: 1) ‘A new commandment I give you, that you love one another; as I have loved you.’ 2) ‘Owe nothing to anyone—except for your obligation to love one another…’ (Romans 13:8). That means you have an obligation today to show your care for others in some practical way.

help me treat people with dignity and respect and as You would!