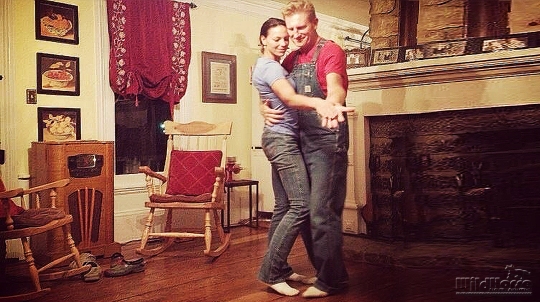 Joey and Rory have remained steadfast and faithful throughout Joey’s journey with cancer. 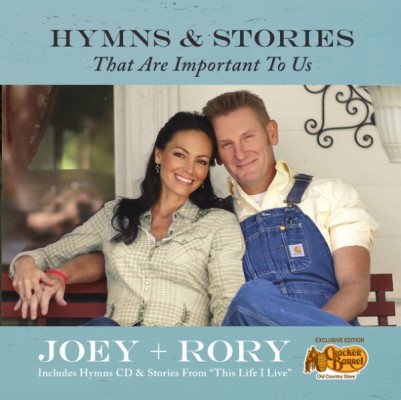 The couple have been truly inspirational, and we’re so grateful for Rory documenting his thoughts and feelings in such a beautiful way. These days, the couple have taken to praying for big miracles one day at a time, and we ask that you join them.

This week is a landmark one for the couple. Today, their album Hymns & Stores that Are Important to Us was released today. Sunday is Valentine’s Day, Monday the Grammys take place, which the couple are nominated, and Wednesday their baby girl Indiana turns 2.

There is a reason Joey has made it this long. Let us all join together in prayer that she gets to experience all this week has to offer. 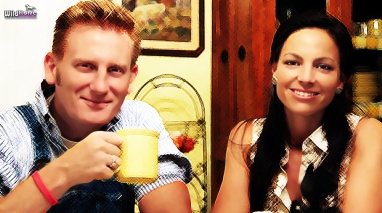 So my hope this year instead is to hold her hand and take her on a ‘virtual’ walk down memory lane together… with pictures and videos on my laptop. I want to take her back to where our lives first began together, and relive this beautiful journey that God has taken us on… from that first song she heard me sing at the Bluebird cafe, to the last one we sang together as we stood on stage and took our final bow… to the songs that she will leave behind here on earth and the ones she will soon sing for eternity to our sweet Lord in that heavenly choir up yonder.

A trip down memory lane together…

That, and I’m hoping for a few soft kisses. The passion for each other that Joey and I once had has been replaced by the sweetest, gentlest kisses. I live for those kisses. They are enough.

A few nights later we will again gather around Joey’s bed and turn the tv-in-the-corner on and watch the Grammy Awards – Joey’s mama and daddy and her three sisters and their kids – all of us having a big-time together. We’ll watch the presenters and performances and scan the cutaways to the audience for our daughters and our manager in the sea of people dressed-to-the-nines for the big night. And we will smile at each other and wonder how in the world we got so blessed. How we’ve come so far without going anywhere at all. 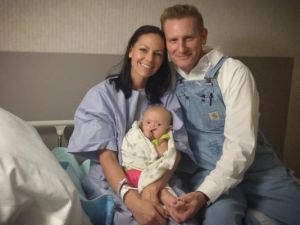 For Indy’s birthday, the family will gather to celebrate.

Our plan is to put streamers up around Joey’s bed and move Indiana’s high-chair in beside her, so Joey can be part of it. So she can watch our little-one eat her cupcake and rip the wrapping paper off her gifts. But Joey is very fragile right now, and so with all of these plans we have, we will need to adjust for what my wife needs.

God Bless this family. I hope they call Joey and Rory’s names on GRAMMY night.

The Country Legend Sang At A Funeral In Texas

Country music legend Randy Travis has made his first public singing appearance since suffering a stroke in July 2013. According to Bullard Banner News, the traditionalist performed “Amazing Grace” at the funeral of business owner Pierre de Wet in Bullard, Texas, on Feb. 3. Randy sang the tune as part of a group that included de Wet’s employees and their family members. Alabama’s Randy Owen also took part in the event, which de Wet specified should be a celebration of life. In December, it was revealed that Randy was making significant process in his recovery, and waswell enough to visit with friends

What Is Said Below Is Exactly What Is Now Happening

Donald Trump can self-fund.   No matter how much they say to the contrary, the media, business, and political elite understand that Trump is no joke.   He could actually win and upset their nice cozy apple cart.   It’s no coincidence that everyone has gotten together to destroy The Donald.   It’s because most of the other politicians are part of the “old boys club.”   They talk big, but they won’t change a thing.   They are all beholden to big-money donors.   They are all owned by lobbyists, unions, lawyers, gigantic environmental organizations, and multinational corporations . . . like Big Pharma or Big Oil.   Or they are owned lock, stock and barrel by foreigners, like George Soros owns Obama or foreign governments that own Hillary with their Clinton Foundation donations.

These run-of-the-mill establishment politicians are all puppets owned by big money.   But there’s one man who isn’t beholden to anyone.   There’s one man who doesn’t need foreigners, or foreign governments, or George Soros, or the United Auto Workers, or the teachers’ union, or the Service Employees International Union, or the Bar Association to fund his campaign.   Billionaire tycoon and maverick Donald Trump doesn’t need anyone’s help.   That means he doesn’t care what the media says.  He doesn’t care what the corporate elites think.   That makes him very dangerous to the entrenched interests.   That makes Trump a huge threat to those people.   Trump can ruin everything for the bribed politicians and their spoiled slave masters.

THE LAND OF ROGER WILLIAMS LOSES RADIO HOST Conservative radio talk show host, Buddy Cianci, born April 30, 1941 in Cranston, RI serves as mayor of Providence, RI from 1975 to 1984 and again from 1991 to 2002. He is one of the longest-serving big city mayors in United States history. Cianci spends the next few years as a radio talk show host on WPRO-630, WHJJ-920 and on WLNE TV ABC CH 6. On January 28, 2016 Vincent Albert [Buddy] Cianci, Jr. dies of colon cancer in Miriam Hospital in Providence.

SUPER BOWL ADS COST $5M EACH This year, a 30-second Super Bowl ad costs as much as $5 million, which is up from last year’s $4.5 million. A Super Bowl spot is just about the best shot an advertisement has for a huge captive audience all year. Also, many non-football fans tune in for the commercials themselves rather than the game. But do they actually influence sales? In 2014, communications firm Communicus reports that 60% of Super Bowl ads do not boost purchases but do increase brand awareness.

TRIVIA QUESTION: When does RCA introduce the first 33⅓ rpm records for sale to the public? The answer appears below.

MIKE SHANNON [WBAP-820, WFAA TV] (Dallas-Mesquite, TX) Subject: Robert Ray Bruton. Saddened to report the death of 2007 TRHOF inductee BOB BRUTON (Robert Ray Bruton on FB.) He died yesterday morning (2/8/2016) after a series of heart attacks at 83 years old. What an impressive resume…gleaned from his LinkedIn account: “Over 50 years experience in broadcasting. 14 years on air personality at KCNC, KXOL, WFAA AM/FM and KJIM in Dallas-Fort Worth; WEAM in Washington, DC; 36 years in management and sales for PAMS productions, TM Programming, Satellite Music Network, Radio Ahhs;, television sales for WTVA-Tupelo and WOWL-Birmingham. Owner, KDSI AM (TX,) KQQN-FM (AK) and KNGV-FM (TX.) Senior salesman for USA Radio Network. Served 17 years USAF (4 active, 13 reserve.) Currently holds the rank of Captain – Civil Air Patrol with an Observer rating.” Bob also managed KFWD-102.1 in Fort Worth, and claims the distinction of being the first overnight disc jockey in Fort Worth while working for KXOL. Services have not been announced yet. Photo…Bob sat in with Ray Kennedy (Whitworth) and me on a June, 2008 episode of our “Hi-Fi Club” radio show. Good guy…he will be greatly missed. R.I.P. (www.dfwRetroplex.com)

GARY DELAUNE [ex KLIF-1190/KRLD-1080 news/KENS TV CH 5 Sports Director] (San Antonio, TX) Subject: A year later: Jim: On January 24th I prayerfully celebrated one year after my triple by-pass. My health is better now than it has been in years. I lost 36 lbs. but of course gained some back. I walk at least a mile every day and still shoot baskets with the grandson. On another subject: Sorry to see Grant Teaff retire from the American Football Coaches Association. What a gentleman and great coach. It was my privilege to do several Baylor games with the late Frank Fallon for Mutual Network in the 80’s. Grant’s son-in-law, Russ Bookbinder, is Director of San Antonio Sports. Grant’s daughter Tammy, is an inspiration to all of us as she continues to battle multiple sclerosis. Gary DeLaune

TRIVIA ANSWER: In September 1931, RCA Victor introduces the first 33⅓ rpm records for sale to the public as Program Transcriptions.

CHARLES GEORGE [KC5RAI – ex KCHU FM] (Dallas, TX) Subject: Live Music. Last night went and heard Ted Levin backed by Mark Deffebach at the Omni Hotel, Ted does a good mix of Rock-a-Billy and Pop tunes. Tonight heard the Jonathan Fisher Trio at the Balcony Club. He does very good Progressive and Modern Jazz. I just wish local radio played more local artists, since this would be good for both the musicians and radio stations. There are only so many times a person can hear Freebird, Stairway To Heaven, House Of The Rising Sun. Why I hardly turn on my radios, but I am 62 so not in the Target Market of the Radio Stations.

Be joyful in hope. Sometimes the circumstances of your life (and the condition of this world) make it difficult for you to be joyful. When you’re searching for Joy, where do you turn? One of the best places to find true Joy is in hope. I want you to know the hope to which I have called you-the riches of My glorious inheritance. Since you are a co-heir with Me, this blessing is definitely for you. When present circumstances are weighing you down, grasp onto hope for dear life! It will help you not only to survive but to thrive-to live joyously.

In some ways, hope is like a hot-air balloon. It is very buoyant, so it can lift you up above your troubles. It enables you to soar in the heavens with Me-helping you see things from a heightened, big-picture perspective. To embark on this heavenly journey, you must climb into the basket beneath the balloon-by trusting fully that your hope in Me will not let you down. There is surely a future hope for you, and your hope will not be cut off.

Be joyful in hope, patient in affliction, faithful in prayer. -Romans 12:12 [May God] give you the Spirit of wisdom and of revelation in the knowledge of him, having the eyes of your hearts enlightened, that you may know what is the hope to which he has called you, what are the riches of his glorious inheritance in the saints. -Ephesians 1:17-18 esv

There is surely a future hope for you, and your hope will not be cut off. -Proverbs 23:18