Congratulations to all the Independent Artists who made it to our, Wildhorse Country Download Chart for November 2015. If you are featured on this chart then your songs have been downloaded hundreds of times to qualify for a position on this chart show. Our download chart show is unique and a one of a kind chart show, as all songs are positioned on this chart strictly on the amount of downloads each song gets during one full calendar month on Wildhorse Entertainment  and Airplay Direct

“Flower Of My Life” is James Marvell first #1 charted song on Wildhorse Independent Superstars Top 30 Country Download chart. James wrote this song together with his Country Cavalier duet partner, Buddy Good.  James Marvell has had many hits in his exciting musical career including a Top 3 hit on the official American Billboard Pop charts back in the 60’s. We are very proud to have James Feature on our Top 30 and it seems his fans have not forsaken him as he is now as high as he can go at #1 with “Flower Of My Life”

[#2] Moving right up to the #2 position this month is the award-winning song written and sung by International award-winning country superstar from the United Kingdom, “Wayne Jacobs” This is a special song for Wayne, “May We Never Forget” and now it is special right here on our chart too, as it easily lands in the #2  position for November 2015. Wayne is no stranger to the Top Of The Charts with numerous #1 under his belt, it seems this tune is destined to move up and it can only go up one more position, will it or wont it? One month will reveal everything.

[#3] After reaching the #1 spot last month Clay Alston moves into the third position on the Wildhorse Independent Superstars Country TOP 30 Download Chart show this month with his mega Country hit, “Another Round. “I never took music so seriously to the point were it’s not fun, even though I’ve had chances to go in different directions with the music business. I always kept my head below the clouds and never let my head get above them” Clay Alston still riding high as our new #3 on our Top 30 Chart this month still a very good position for Clay Alston to be, being on our  Independent Superstar November Top 30 Chart.

[#4] At number four Independent Superstar, Donna Cunningham with her latest hit, ‘The Arms Of A Stranger” Donna seems to find it easy to pick a hit song out of a hat, as almost every song she has recorded over the past three years have charted on this Top 30. Donna will always be the first to admit that she is so fortunate to have a fan base who has never let her down and always support her no matter what, and for that she is eternally grateful. But then Donna is true to her music and we believe she deserves the support she gets worldwide because she is truly an Independent Country Superstar.

[#5] Our former number one, Brad Tucker is still hanging around the Top 5 with his huge country hit, “Gonna Be A Good Day” this song has done so well for Brad and has made him a popular addition to our monthly Top30. Brad Tucker with the help of a few songwriters has composed most of his hits himself. We are sure that Brad Tucker will be around for a long time as he turns out hit after hit with no end in sight. Brad will always be welcome here and his fans will make sure his presence is always noticed on this Top 30

Well that’s our Top 5, the full Top 30 is available at http://www.wildhorse.co.za for you to download if you so wish.

If there are any radio stations out there who wish to air our Chart Show please contact us at whisnews21@aol.com for links to download our monthly chart show.

“Common Man” is available now through digital retailers on Lorraine Jordan & Carolina Road’s latest album, Country Grass. After topping the Billboard country charts in 1983, “Common Man,” originally recorded by Conlee, takes on new life by the bluegrass band. “It was nice to be able to do a bluegrass version of one of my songs, and I really enjoyed working with Lorraine on the project,” Conlee said. “I understand it has gotten a lot of positive feedback since it has been out, and that is really encouraging to me.” 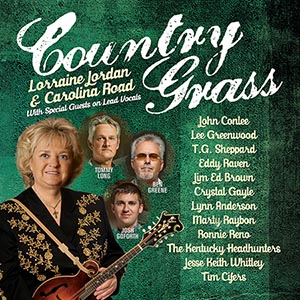 In addition to taking home both “Female Vocalist of the Year” and the prestigious “Song of the Year” at the Society for the Preservation of Bluegrass Music of America’s (SPBGMA) 2015 awards and convention, Lorraine Jordan & Carolina Road have been riding high off of the momentum created by their latest album Country Grass. The band teamed up with country music’s legends on Country Grass, as they re-recorded some of their biggest hits, but with a bluegrass twist. The star-studded project features collaborations with Crystal Gayle, Lee Greenwood, The Kentucky Headhunters, T.G. Sheppard, Eddy Raven, John Conlee and Marty Raybon in addition to the late Jim Ed Brown and Lynn Anderson.

ABOUT LORRAINE JORDAN AND CAROLINA ROAD:
Hard work has paid off for this award winning bluegrass band. Having a dynamic show has earned them over 100 performances each year throughout North America at more than 60 major festivals. Carolina Road plays worldwide and hosts a national bluegrass festival, Christmas in the Smokies. They have hosted the Canadian Bluegrass Awards, toured Europe, and played 15 bluegrass cruises. Carolina Road’s performance is a traditional sound with a fresh approach, which includes invigorating instrumentals, smooth blending vocals, and all the energy that you can stand!

Lorraine likes to think of the band as a family, and her band members have longevity in the band. Ben Greene (banjo/vocals) “2015 Banjo Player of the Year” has been with Carolina Road for 11 years. Josh Goforth (fiddle/guitar/vocals), has also been with them for 11 years, and is a Master Fiddle Player Extraordinaire! He was a 2009 Grammy award finalist for the CD “Cuttin Loose”. Tommy Long (guitar/lead vocals) has been with the band for 4 years. His outstanding lead vocals and driving rhythm guitar playing helps propel the band. Also, Jason Moore, much sought after bass player, will be touring with the band, and dobro player, Brad Hudson, who was a featured artist at the world famous Country Tonight’s in Pigeon Forge, TN, and at the Legends Theater, in Halifax, NC.

Click banner below to view “Common Man” in our TV lounge

MCG: The Youth Has Taken Over Our Country Music

MCG: The Youth Has Taken Over Our Country Music

The Music City Ghost [File #81] 2015: There are several young singers right now with the right look, the right song material and the financial backing it will take to become the next generation of Country Music Stars.  I have credit cards that are older than some of these young men and women.  It is true that they do not have to know who came before them.  It is not a requirement to be a Country Music Historian to become a star.  In some cases they are taking Pop singers or Rock singers and producing a Country session and the artist has never been exposed to Country Music.  The musical genres have crossed over now a days to the point that it is very difficult to determine what genre you are listening to on the radio.  Girls coming out on stage with barely any clothes on has been going on in the Rock and Pop field for years but now it is showing up at all your Country Music concerts.  Firework displays and smashing guitars has been an expectation of Rock fans for years and if it doesn’t take place at a Country concert these days the fans feel cheated.  The youth has taken over the Industry and they are going to do it their way

But when you pray, go into your room, close the door and pray to your Father, who is unseen.

Then your Father, who sees what is done in secret, will reward you. Matthew 6:6

Have you ever tried to have a conversation with a toddler? When you’re in the middle of a sentence, they figure it’s a good time to play with their toys or chase the dog around the house. Sometimes that’s how we treat God. We give Him a few hurried minutes and scattered thoughts, but we don’t set aside a time and place to give Him our full attention and listen to Him. We forget that the place of prayer is also the place of answered prayer! Our problem is ‘the war of wandering thoughts’. Things we’ve forgotten suddenly ‘parade’ across our consciousness, demanding our attention. And as James says, if we’re ‘double-minded’ we don’t get answers to our prayers (James 1:8). What can we do? 1) Pray aloud. This makes it difficult for your mind to wander. You may feel awkward at first, but you’ll soon get comfortable with it. 2) Jot down distracting thoughts.When the ticker tape starts running, write each thing down and forget it until later. And if you still can’t help thinking about it, take it to God in prayer. 3) Keep a diary. Sometimes we don’t really know what we want or how we feel about something until we put it in writing. Then, like a mirror, there it is: your deepest needs and yearnings in front of you—and God. Tell Him your longings and let Him purify them. Tell Him your temptations and let Him strengthen you. Tell Him your resentments and let Him forgive you, and empower you to forgive others. There’s no greater privilege than the privilege of prayer, so don’t neglect it.

forgive me when I pray and then don’t listen.

Help me to listen to Your voice when I pray. In Jesus’ Name, Amen