RAPPER 50 CENT MAY HAVE TO DOWNGRADE TO 5 CENT The Associated Press reports that the court orders Rapper 50 Cent to pay $5 million in a lawsuit about his post of a sex tape in 2009 given to him by the man in the tape. The Hartford Courant states that Curtis Jackson III, better known as Rapper 50 Cent, owes more than $10 million but that his assets only total more than $10 million. 50 Cent, who owns a massive Farmington, CT mansion that he tries to sell for years, files for bankruptcy in Connecticut.

TRIVIA QUESTION: What other broadcast name does Walter Cronkite originally use on the air? The answer appears below.

KEN DOWE [CEO #1 KKDA FM / EVP McLendon Corp. #1 KLIF-1190] (Dallas, TX) Jim, Jay Cook was my friend and mentor from the time I was 16 years old and Jay was a fresh graduate of Keegan’s radio school in Memphis, working at WDDT in my home town of Greenville, MS. He has his wife Carolyn were uncommonly kind to a kid in the Deep Delta, who was totally fascinated by the magic of radio. Jay and I would drive a few blocks downtown in his “Chevy, to the levee,” so that the car antenna could reach into the sky and pull in Wink Martindale and Jack Parnell, my two favorites on WHBQ. Ironically, Jay’s son John and I connected many years later when he was my most worthy competitor in Dallas as PD of KISS. I tried to hire him and he said no, then later “yes.” I have an almost unbelievable story about that! His dad Jay remained one of my closest friends his entire life. There was never a nicer fellow, and he was the smoothest, warmest, radio personality I ever heard. Incredible on air performer. I tried to convince him to give up his WFIL PD position and take my place as Executive VP/GM at KTSA/KTFM in San Antonio when I bought my first station. He came down, but ultimately decided to stay in Philly where he and Carolyn were happy. That worked out well. Jay became President of Gannett, and I hired a young PD from DC to take my place in San Antonio. Really talented young man named…Dan Mason. I’m actually a “talent scout?” Please give Jack my email address and I will provide him with the last addresses and phone numbers of my friend John Cook. Funny how all of us in this wireless business remain wired together…for lifetimes…Ken

JAY WALKER [CBS Radio Dallas/KJKK FM/Infinity KTSA-550/KTFM FM/Jay Walker Prod] (Dallas-McKinney, TX) Subject: John Cook report… Jim I was able to find John Cook’s email and I passed it along to Jack Parnell. Reid Reker, a good friend of mine, has regular contact with John and he passed the contact info along. Jay

BILL CHERRY [Realtor – In late 1950s Music ’til Dawn host on WWL-870] (Dallas, TX) Hi Jim Loved thinking about “Strike It Rich” again. I remember listening to it when I was a child. I love that “style” of radio. And then there’s Art Bell. A mixture of genius and crazy. Welcome home to Art! All the best, Bill Cherry, Dallas

TRIVIA ANSWER: In 1935, Walter Cronkite, the most trusted man in America, enters broadcasting as a radio announcer on WKY-930 in Oklahoma City, OK. Walter admits that he uses Walter Wilcox as his broadcast name because at the time radio stations do not want people to use their real names because they might take their listeners with them when they leave. On July 17, 2009, CBS newsman Walter Cronkite, anchorman of The CBS Evening News on TV for 19 years (1962-1981), dies of cerebrovascular disease at 92.

CHUCK DUNAWAY [ex WABC-770, WKY-930, KILT-610, KLIF-1190] (Houston-Katy, TX) Subject: memories. Every once in a while an old memory is triggered by something on TV…this morning I awoke at three and the TV was on a channel called Buzzr…on the tube was a show called “Match Game”. One of the guys I rode the train with in the old days at WABC was Gene Rayburn and he was the MC on Match Game. I got off the train at Scarsdale and he rode it on into Connecticut…memories. Anybody remember Gene Rayburn? 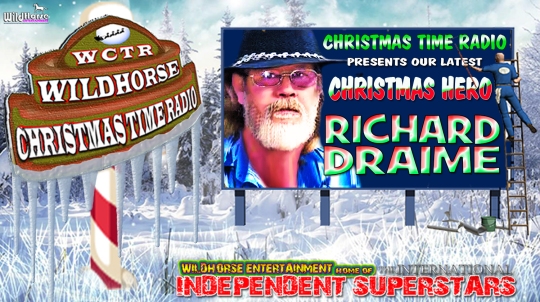 “Just For You At Christmas”

for as long as forever is playing only Christmas music, stories and Jingle Bells 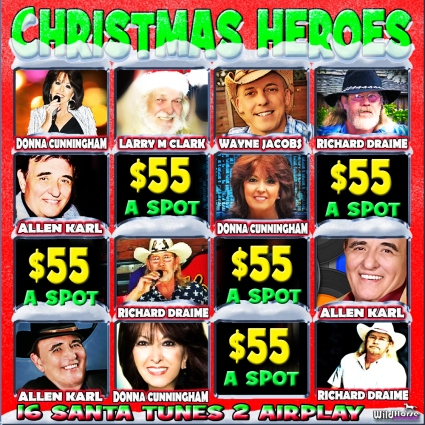 Only 5 Bells Open on this Christmas Heroes Compilation

MCG: Will Country Play At The Toyota Auditorium?

I thought the best way I could describe the origins of Country Music would be to take a direct quote from what I read on the Internet.  It reads as follows: Country music is a genre of American popular music that originated in Southern United States, in Bristol, Tennessee in the 1920s.It takes its roots from the southeastern genre of American folk music and Western music. Blues modes have been used extensively throughout its recorded history. Country music often consists of ballads and dance tunes with generally simple forms and harmonies accompanied by mostly string instruments such as banjos, electric and acoustic guitars, and fiddles as well as harmonicas. The term country music gained popularity in the 1940s in preference to the earlier term hillbilly music; it came to encompass Western music, which evolved parallel to hillbilly music from similar roots, in the mid-20th century. The term country music is used today to describe many styles and subgenres. The origins of country music are the folk music of mostly white, working-class Americans, who blended popular songs, Irish and Celtic fiddle tunes, traditional ballads, and cowboy songs, and various musical traditions from European immigrant communities. In 2009 country music was the most listened to rush hour radio genre during the evening commute, and second most popular in the morning commute in the United States. Now with all of that being said isn’t it ironic that the largest distributor of Country Music in Nashville, TN is SONY which is owned by the Japanese?

During World War II while the United States was at war with Japan, Country Music was hated by the Japanese since it depicted American every day life.

Just this week it was announced the new naming rights for Nashville’s largest venue where the Tennessee Titans professional football team plays is now NISSAN STADIUM which is another Japanese corporation.   Is the timing right for a new Country Music star to emerge that is Japanese?  Time will tell.   Sayonara

“You Can Begin Again”

I say to myself, “The LORD is my portion; therefore I will wait for him.” Lamentations 3:24

When you haven’t accomplished what you’d hoped for, regret can become a major pastime. The computer analyst wishes he’d become an accountant, the accountant wishes he’d become a doctor, etc. Maybe you planned to leave a legacy, but to date all you’ve left is a trail of unfilled aspirations. It’s not too late; you can begin again! You just have to be prepared to pursue your dream and pay the price. ‘To win the contest you must deny yourselves many things that would keep you from doing your best’ (1 Corinthians 9:25). Don’t listen to the critics and complainers who’ve settled for less. Your goal shouldn’t just be to live long, but to make a difference in your world and glorify God. Charles Lindbergh said, ‘I feel I lived on a higher plain than the sceptics on the ground…Who valued life more highly, the aviators who spent it on the art they loved, or these misers who doled it out like pennies through their antlike days?…If I could fly for ten years before I was killed in a crash, it would be a worthwhile trade for an ordinary lifetime.’ Look at Moses. Look at Paul. They both began again. Look at Winston Churchill: instead of retiring after World War II, he went on to win the Nobel Prize in literature. When Heinrich Schliemann retired from business to look for Homer’s legendary city of Troy—he found it. Here’s a Scripture you can stand on: ‘Through the Lord’s mercies we are not consumed, because His compassions fail not. They are new every morning; great is Your faithfulness. The Lord is my portion…therefore I hope in Him!’ (Lamentations 3:22-24). That means you can begin again.

Prayer: Heavenly Father, You are the God of second (3rd and 4th and endless) chances.

Thank You for allowing me to start again. In Jesus’ Name, Amen