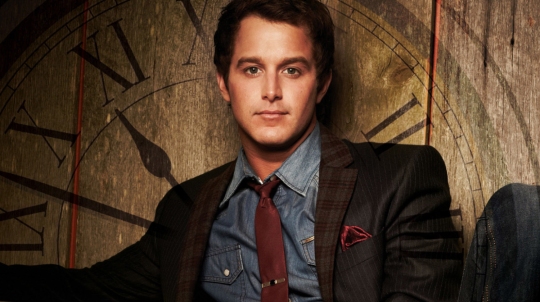 Mercury Nashville recording artist Easton Corbin’s new single “Yup,” from his No. 1 selling album About To Get Real, will go for official radio adds on Monday, July 27. “Yup” is the follow-up to his Top 5 hit “Baby Be My Love Song,” which he performed on NBC’s TODAY and FOX & FRIENDS during his album release week.“Yup” was written by Shane Minor, Phil O’Donnell and Wade Kirby. About To Get Real, produced by Carson Chamberlain, features 12 tracks including three co-written by Corbin. About To Get Real is the follow-up to Easton’s first two successful albums which included the No. 1 hits “A Little More Country Than That” and “Roll With It” as well as the Top 5 hits “Lovin’ You Is Fun” and “All Over The Road.”

On Saturday, July 18th, the marquee sign at the historic Palace Theatre in Crossville, Tennessee read “SOLD OUT,” and country music legend Bill Anderson was the headlining name to blame. Bringing top hits like “Po’ Folks,” “Bright Lights and Country Music,” “Mama Sang A Song,” “The Tips Of My Fingers,” “8X10,” “Still,” among others, the million-selling recording artist, Grand Ole Opry member, and celebrated songwriter, performer, TV personality and radio host has been touring for over fifty years. Yet still today, he has the ability to capture the attention of millions of country music fans young and old.

Reviewers have long heralded Anderson for his humorous jokes and friendly banter with the audience throughout his live shows, matched by resonant stories of his life milestones and challenges encountered along the way.

Anderson is currently touring in support of his new Gospel album, God Is Great, God Is Good, with over 40 Gospel favorites as well as his original 10-track project, Life, released on November 12, 2013. To purchase, visit iTunes, Amazon or BillAnderson.com.

For show details and information on where to buy tickets, please visit BillAnderson.com.

My dear brothers, take note of this: Everyone should be quick to listen, slow to speak and slow to become angry, James 1:19

Talking instead of listening—will get you into trouble. Two geese were preparing to fly south when a frog asked if he could go along. They questioned how he could do it. ‘Easy,’ he said. ‘You guys hold a stick between your beaks and I’ll hang on with my mouth.’ Off they went as people looked up, admiring their teamwork. The trio was making great progress until somebody below shouted, ‘Great idea! Whose was it?’ That’s when the frog opened his mouth and yelled, ‘Miiiiiiiine!’ Every time you open your mouth there are consequences! So learn to listen. Plutarch said, ‘The talkative listen to no one, for they are ever speaking. And the first evil that attends those who know not how to be silent is that they hear nothing.’Listening without having to air your knowledge or interject your opinion is a quality of character that proves you’re mature. Larry King once said, ‘I remind myself every morning: nothing I say this day will teach me anything. So if I’m going to learn, I must do it by listening.’Jesus was a great listener, and as a result He attracted people like a magnet. Doubtless there were times He was tired and didn’t feel like it—but He listened anyway. When the disciples fussed among themselves, and the Pharisees grumbled and caused trouble, Jesus focused on the important things. He listened, He spoke, and people followed. Listening is often more effective than talking. In fact, there’s a point in every conversation where you need to say less and listen more. In those moments you not only hear what others are saying, but what God is saying to you!

Discovery Lands in Hobbs New Mexico For Another VIP Pickup

This is the 2nd leg of our Voyage aboard Worldwide Country Discovery 10 as we seek out friendly Disk Jockeys worldwide. This part of Discovery 10’s adventure continues with making its second landing in Hobbs, New Mexico to pick up International Songwriters Barbara Blevins, Keith Bradford and Independent Superstar Dan Schafer who are all now comfortably seated in the VIP section of Discovery 10 as we now continue on this our 10th adventure to seek out fame and fortune for our Discovery Voyagers.

The Captain of Discovery 10 respectfully asks that all Disc Jockey’s would consider downloading and adding the following new Hits songs to their radio playlists for airing on their exciting radio shows:

* Larry M. Clark from Pegram, Tennessee comes to you with his latest radio release, Cant Take The Country

We will be adding more artists to this release during the month and hope that the Disc Jockeys worldwide will find these songs worthy of their playlists.

The Captain of Discovery 10 as always thanks all Disc Jockeys and Radio Stations in advance for considering these songs for playlisting on their radio shows or stations.

JUST PICKED UP AND JETTED AWAY ON DISCOVERY 10 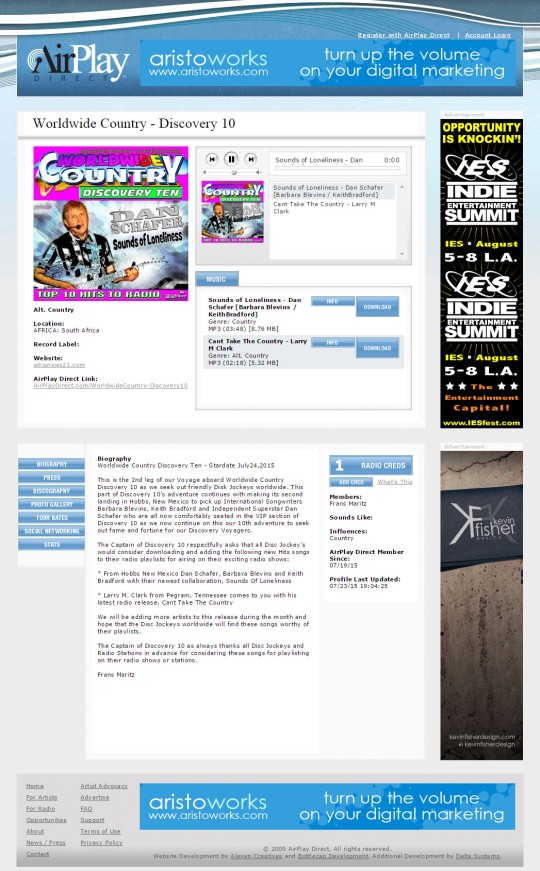 Discovery Voyages now part of history proudly displayed in our Hall of Voyages for all future generations of Independent Artists to see.