Dolly Parton to Perform At The Ryman Auditorium

Dolly Parton to Perform At The Ryman Auditorium

The Dustin Wells Foundation’s Gift of Music concert to benefit the W.O. Smith School of Music announces “Dolly Parton: Pure and Simple” will take the stage of the historic Ryman Auditorium on July 31st.

Since its inception in 2008, the benefit concert has had the support of some of music’s greatest artists, including Ronnie Dunn, Kellie Pickler, Dierks Bentley, Lady Antebellum, Peter Cetera, Lee Greenwood, Peter Frampton, Gunnar Nelson, and many other generous and talented musicians who have donated their time and talent to support the efforts and causes of Dustin’s foundation. 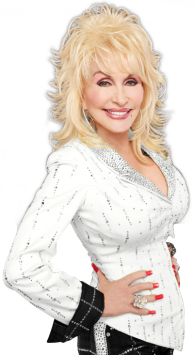 Tickets for “Dolly Parton: Pure and Simple” are $85 and $55 plus applicable services charges and are available starting at 10:00 a.m. on Saturday, June 20 online only at www.ryman.com. A limited number of VIP packages will be available at www.dustinwellsgiftofmusic.com.

“The ‘Gift of Music’ is something that runs deep within my kin folks,” says Dolly Parton. “I love and cherish The Ryman and I am really excited to perform there to help raise money for the Dustin Wells Foundation. This goes to help many young kids that are part of the W.O. Smith School of Music. Through all of us working together we can make a difference in helping a child feel the magic in making music.”

After Dustin Jack Wells lost his life in a car accident in 2005, his family and friends found a way to keep his memory alive and help others in the process. A fund was set up with all monetary donations used to reach out to others in memory of Dustin. Donating to the W.O. Smith School of Music is just one way the foundations enriches young lives.

The Iconic singer, songwriter, musician, actress, and philanthropist Dolly Parton is scheduled to perform four SOLD OUT shows at Dollywood on August 8th and 9th to benefit the Imagination Library. The addition of this concert marks the first full Nashville show Dolly has headlined in 12 years.

Hunter Hayes Discusses what It Means to Be Brave 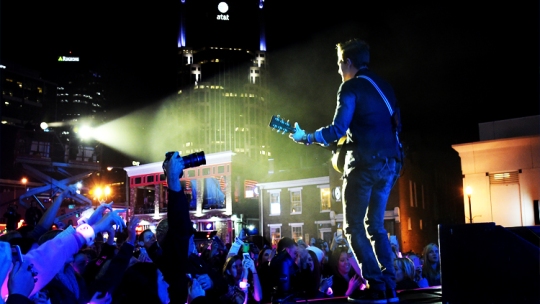 Hunter Hayes Chats About What It Means to Be Brave 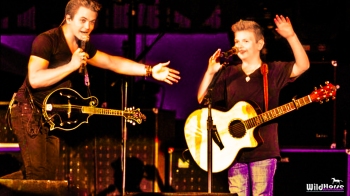 Hunter Hayes recently released two songs (“21” and “Where It All Begins” with Lady Antebellum) via the streaming service Spotify; the change in how he’s releasing music is a reflection of his resolution to be brave.

“I don’t know what’s going to happen with all the stuff with Spotify right now. Because there’s no record, it’s just songs, we’re releasing songs. I don’t know what the next phase of the music industry is going to be. That seems a bit scary. But it’s the year to do that, we have to be brave.”

At the beginning of 2015, Hunter was chatting with some friends and made a resolution to make 2015 the year to be brave.

So what does bravery mean to him?

“It means doing everything you’re fearful of… The things you’re scared of just because you’ve never done ‘em before; it’s probably a good time to do it, you know?”

One of the ways that Hunter encourages fans to be brave is by donating blood. In his “Sleeves Up” partnership with American Red Cross, his goal is to reach 21,000 blood donations by the end of the year. Fans can take the pledge here: https://sleevesup.redcrossblood.org/Hunter-Hayes-SleevesUp-

Hunter is currently on the “Wheels Up” tour with Lady Antebellum and Sam Hunt. For more information, visit http://www.hunterhayes.com

Whats Wrong With Nigerians Are They All Con Artists

Below Is Another One of Millions of Nigerian Scams, Have you Fallen For One ?

I suppose they are still catching some people out on this, as if they did not, we would not be getting these email a dime a dozen on every other day delivered directly into out mail boxes. It is so pathetic yet some cannot see through a scam like this and fall for the unbelievable offer of free money. It is hard to believe that you would find someone who would even believe this scam. In the scam below they claim they have $3.5 million dollars for you, but for you to receive it you need to pay them $244., Really!!!!!!!!

WHISNews21 thought we would share the mail below with you, but then you must have got your own mail already.

Beware below is a scam do not respond to it, it is published for your info only do not be caught .

NOT GO THROUGH CUSTOMS BECAUSE AS AN AMBASSADOR TO NIGERIA, I AM A US

GOVERNMENT AGENT AND I HAVE THE VETO POWER TO GO THROUGH CUSTOMS. AS

ADDRESS. (SEND YOUR CELL PHONE NUMBER AND THE ADDRESS WHERE YOU WANT

ME TO BRING THE PACKAGE).

YOU HAVE REALLY PAID SO MUCH IN THIS DELIVERY THAT MAKES ME WONDER.YOU

THERE IS NOTHING ANYONE CAN DO ABOUT IT,AS IT ONE OUR PRIORITY TO

FIGHT FOR OUR COUNTRY MEN ANYWHERE IN THE WORLD.

DEFEAT ALL ODDS AND THE COST OF REGISTERING IT IS $244.THE FEE MUST BE

NECESSARY ARRANGEMENT CAN BE MADE BEFORE TIME WILL BE AGAINST US.

AS SOON AS YOU SEND THE FEE MAKE SURE YOU SEND ME THE PAYMENT INFORMATION.

DELIVERY CAN BE COMPLETED. IF YOU DO NOT COMPLY, THEN IT WILL NOT BE

MY FAULT IF YOU DO NOT RECEIVE YOUR PACKAGE.

FROM MR.MICHAEL EFE THE PERSONAL ASSISTANT

TO THE U.S.A AMBASSADOR TO NIGERIA

Are you ready to be caught by the Scam above ????

There are prayer warriors, all over the world, most of them women, who pray daily for the health of everyone suffering or in need, whether they know them, personally, or not.  They do their work totally without fanfare, sometimes as a group, often individually.   If I have confessed my sins and been forgiven, somewhere someone will be praying for me, even if in a general way.  I won’t even know I am in their prayers and may never suspect that my healing has come through them.  Bless these prayerful unselfish people, Lord Reward them for their efforts on behalf of all believers who are ill, and assure them that their efforts are not in vain.

Confess your faults one to another, and pray one for another, that ye may be healed.
The effectual fervent  prayer of a righteous man availeth    much .  (James 5:16