THE FRINGE GOES CLASSIC In 1977, the all night DJ on KIKK FM Houston, TX during my time as a DJ there is deep voice Bob Cole. Later, Bob relocates to Austin, TX and becomes a major radio player on KOKE FM (93.3) and KVET FM (98.1). Cole is a restaurateur, too. Austin broadcaster Bob Cole, co-partner of Austin Radio Network, buys Retro Alternative The Fringe K287FG FM (105.3) and flips it to Classic Hits tunes from the 1960s, ’70s and ’80s. Cole says: It’ll be all familiar songs that no one else in Austin is playing.

HOUSTON COMPLETES A MORNING RUN OF THE BULLS As we mention before in JRRR, George Lindsey flees Louisville, KY to become a KILT FM Morning Bull. Two others join Houston’s Morning Bull. Monica Lunsford exits Alpha Media KUPL (98.7 The Bull) Portland, OR to leap into the arena. Cowboy Dave KILT FM night DJ since 2010 moves on up to mornings in the Bull ring. KILT FM’s new George, Mo and Cowboy Dave morning show debuts at 5am on Monday, March 16, 2015.

SCRIPPS SENDS NEWS REPORTERS PACKING Corporate drivel pours out of Scripps. Carolyn Pione Micheli, Scripps VP Corporate Communications: We did have a few layoffs in some of our markets today. It was fewer than a handful of people in each place. Many of those people will be offered other jobs, so the total number right now is not clear yet. TVSpy reports: So far, the majority of the layoffs appear to be happening at KGTV (TV) San Diego (CA), KNXV (TV) Phoenix (AZ) and KMGH (TV) Denver (CO).

TRIVIA QUESTION: What is the first modern commercial FM radio station in America? The answer appears below.

JACK PARNELL [former Program Director/DJ WHBQ-560] (Memphis, TN) Subject: Jimmy Wilson. Jim: I really enjoyed your Jimmy Wilson article. About 20 years ago, I emceed “The Grand Ole Opry Comes to Memphis” at the Midsouth Coliseum that featured about 15 of the all time Opry greats; people like Jeannie Seely, Little Jimmy Dickens, and many others, including Faron Young. He sang one of my favorite hits…”Four In The Morning”, that featured Jimmy Wilson’s fabulous guitar all the way through, and especially his solo part. After I introduced the next act, I cornered Jimmy backstage and told him that his guitar picking was great. He made it look so easy that it seemed like anybody could do it. He picked a couple of licks and said: “Well heck, I just love playing this thing…it’s good for me”. In my years of knowing many famous musicians and singers, I’ve concluded that the best of them play/sing because it’s good for them, and we listen because it’s good for US! Jack Parnell-Memphis…former WHBQ dj (for 13 years).

LIZ PATRANELLA [Liz Houston – KTSA-550, KBAT-680] (Austin, TX) Subject: Paul Morgan. Wanted to forward this sad news from David Foster to everyone. Liz Some of you may already know…some may not but Paul Morgan once Program Director and Air Personality at KKYX (and other call letters) passed away this morning. I’ll never forget my first job interview with him. He said I reminded him of himself in his younger days. I hope I made him proud. Details of services are pending. David Foster

BILL CHERRY [Realtor, in late 1950s Music ’til Dawn host on WWL-870] (Dallas, TX) Subject: Your bio. Jim, I’d not seen JRRR’s first edition until this morning. Just like Chuck did in his book, you told about your experiences with radio’s evil side and the “Play Misty for Me” girls who were not only as real as rain but very scary. Good job! Bill Cherry

DAVE MICHAELS [WSAI-1360/KONO-860/KBUC FM] (Dayton-Huber Heights, OH) Find out what you are good at and what you love. Like photography – buy a camera and start shooting – all these schools are a rip off Jimmy. YOU just do it – shoot photos and follow your eye – just do it. At one time I owned (9) cameras…Nikons, Pentax, Canons, Ma’my-a , Richo. Had a $1000 dollars worth of Camera and Lens taken out of my car over night in San Antonio – my fault – should NOT have left it in a locked car – back seat in front of my Apt. That’s what you call – A hard lesson to learn. Dave

TRIVIA ANSWER: In the 1930s. FM broadcasting begins in the United States on engineer and inventor Edwin Howard Armstrong’s experimental radio station, W2XMN. On March 1, 1941, WSM FM’s owner the National Life and Accident Insurance Company is the first commercial broadcaster in the U.S. to receive an FM license from the FCC. In 1951, WSM FM’s owner NL&AI shuts it down. On November 1, 1962 WSM FM returns to the air waves.

DON SUNDEEN [DJ/Hi Records promotion/TV ad production] (Dallas, TX) Subject: The “Wrecking Crew” doc is finally being released. When I was working for Liberty Records the Wrecking Crew played on most of our stuff that was produced by the great Snuff Garrett. They also worked with Phil Spector, including Sonny and Cher’s “I’ve got you babe.” Some of the Liberty acts whose records they played on include: Bobby Vee, Johnny Burnette, Gene McDaniels, Buddy Knox, Walter Brennan, Gary Lewis & the Playboys and Del Shannon. Eighteen years in the making, the documentary “The Wrecking Crew” will be released to a limited number of theaters in a couple of weeks, followed soon after by DVD and video on demand (VOD). It’s about a session group back in the ’60s and ’70 that backed up many of the top acts of that era. Delays in completion of the 95 minute film were due to procurement of usage rights for dozens of songs. Magnolia Pictures’ “The Wrecking Crew” is directed by Denny Tedesco, son of Tommy Tedesco, the group’s guitarist. Movie trailer: http://youtu.be/hhl-3EOYTkc 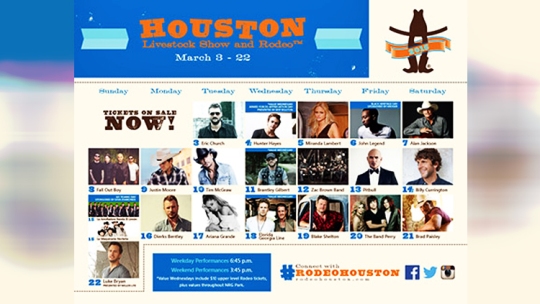 The world’s biggest livestock and rodeo show returns to Houston tomorrow, and it’s reeling in big ticket prices on the secondary market.

From March 3-22, the Houston Livestock Show and Rodeo will welcome some of music’s biggest acts, including Luke Bryan, Ariana Grande, Tim McGraw, Fall Out Boy and Eric Church. 20 total performances are scheduled over the rodeo’s three-week stay at NRG Stadium.

Across all 20 dates, the average price for Houston Livestock Show and Rodeo tickets on TiqIQ is $95.44, marking a price increase of 5.2% from last year’s average of $90.72. With country stars highlighting the bulk of the bill, Hunter Hayes, Justin Moore and Eric Church, will be among the cheapest artists to play this year’s rodeo. Luke Bryan, Alan Jackson and Pitbull serve as the three highest-priced performers on the secondary market.

Hunter Hayes is set to play on Wednesday, March 4, which will be this year’s cheapest individual day. March 4 Houston Livestock Show and Rodeo tickets average at just $26, 72.7% below this year’s average, and get-in price starts at $3. Justin Moore will perform five days later on March 9 and secondary tickets average at $30 with a get-in price of $2. The opening day of the rodeo on March 3 will be headlined by Eric Church, who’s garnered a $31 secondary average. The rodeo’s cheapest ticket on March 3 is listed at $3.

The most expensive day of this year’s rodeo will be on its final day on March 22, when Luke Bryan is set to take the main stage. The average secondary price for March 22 Houston Rodeo tickets is $166.01 and the day’s cheapest ticket is $35. On March 7, Alan Jackson will perform to the tune of a $136.79 average ticket price and $34 get-in price. Pitbull will be the rodeo’s third most expensive performer on March 13. That day, the average price for Houston Rodeo tickets is $134.56 and fans can get in for $29 on the secondary market.

Four other days have seen secondary ticket price average over $100. Brad Paisley, Blake Shelton, Ariana Grande and Zac Brown Band will generate triple-digit averages on their respective days. Paisley will perform on March 21, Shelton on March  19, Grande on March 17 and Zac Brown Band on March 12, when tickets average at $104.47 and get-in price is $20 on the secondary market.

2015 will mark another memorable year at the Houston Rodeo. With Luke Bryan and Alan Jackson set to take the stage across the rodeo’s most expensive days, the secondary market has indicated that country music is alive and well in Lone Star State.

Quote of the Week

“There’s no present.  There’s only the immediate future and the recent past.” – George Carlin

Whether you’re in the past or in the future, keep listening to WildHorse Radio!

“LORD JESUS DISCIPLINE ME IN SIMPLICITY”

I ‘ve got two coats too many and walk one mile too short.  Discipline me in simplicity.

I’ve got silver lined pockets  and a sheath for my sword.  Discipline me in simplicity .

I’ve got more than enough and a silo in which to store.  Discipline me in simplicity.

My heart breaks under the weights of all I have,  yet my eyes still lust for more.

O Lord, discipline me in simplicity.

The people of my city are intoxicated on the busyness of industry.

We would rather buy a decorated sign that says, “Live Simply”.

Than to simply live without all the trappings of clout we are told we need by our TV’S.

Discipline me in simplicity.

REDEFINE FOR ME THE DEFINITION OF ENOUGH.

If it is less than I have and less than I want, then what more can enough be, if not only my needs?

Discipline me in simplicity.

Teach me how to give, for I know only how to buy.

Teach me to apply the word “simplify.”

Place me in the context of your economics and your community.

Where I cannot claim excess when others are lacking.

( What right do I have to wealth when poverty is attacking my sibling?)

Where my worth is not weighed by the gold in my hand, but by the crown worn by my King.

Where my table is open and shared with people all around me.

Where the hungry feast because I am fasting.

Where those without no longer have to plead because I am willing to give of what I do not need.

Smaller portions, fewer things.  More of you, and less of me.

My people and I are ready for your victory.

Discipline me, O lord in the weakening power of your simplicity.