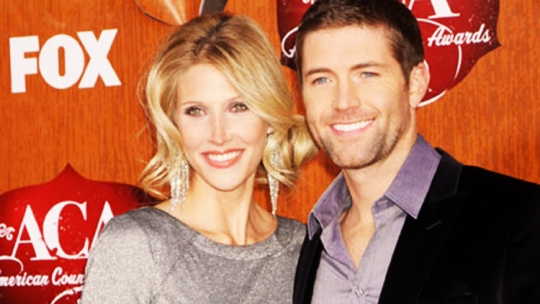 “God has truly blessed Jennifer and me with this healthy little boy,” shares Josh. “We are so thankful and excited to see our family grow yet again.”

In addition to being a multi-platinum-selling country artist, Josh is known for being a true family man. He shared his experiences and life lessons learned from being a son, a husband and a father with his book MAN STUFF: Devotional Thoughts on Faith, Family and Fatherhood.

Currently, Josh in the studio finishing his sixth studio album due out in early 2015 on MCA Nashville.  As Josh revealed via Instagram earlier this week, the lead single off the project is “Lay Low,” impacting country radio Sep. 15.

Prayers for our nation that we will overcome all adversities and continue to be the Land of the Free and the Brave.

Prayer for This Day

Holy God, I pray in the name of Christ that you will this day increase my faith

In the sweet promises of the Gospel. Give me repentance from dead works.

Pardon my wanderings, & direct my thoughts unto thyself, the God of my salvation.

Teach me how to live in thy fear, labor in thy service, and ever to run in the ways of thy commandments.

Make me always watchful over my heart, that neither the terrors of conscience, the loathing of holy duties, The love of sin, nor an unwillingness to depart this life, may cast me into a spiritual slumber.

But daily frame me more and more into the likeness of thy son Jesus Christ, that living in thy fear,

And dying in thy favor, I may in thy appointed time attain the resurrection of the just unto eternal life.

Bless my family, friends & kindred; unite us all in praising & glorifying thee in all our works begun, Continued, and ended, when we shall come to make our last account before thee blessed Saviour,

Who hath taught us thus to pray, our Father.

Nashville: Charlie Daniels, Brad Paisley, Eric Paslay, and duo Maddie and Tae will help the Grand Ole Opry celebrate the 25th anniversary of Country Cares for St. Jude Kids on Tuesday, Sept. 23. Paisley will close the show with a 30-minute set including music from his latest album, Moonshine In The Trunk.

Maddie and Tae will be making their Opry debut that evening. Photos and videos of special moments from 25 years of Country Cares for St. Jude Kids will be shared throughout the Opry performances. A St. Jude patient also will appear as a guest announcer during the show. A portion of the proceeds from tickets sold beginning today (Sept. 4), will benefit the hospital.

What happens when you give two four year old girls buckets of popcorn and ask them to recount the story of Tangled? Watch to find out…

PRETORIA, South Africa –  The judge in the Oscar Pistorius murder trial has cleared the former Olympic and Paralympic sprinter of the most serious charge in connection with the shooting death of his girlfriend.

Judge Thokozile Masipa said that the prosecution had not proved that Pistorius was guilty of premeditated murder when he shot and killed Reeva Steenkamp in the bathroom of his home on Valentine’s Day 2013. If found guilty on that charge, Pistorius could have faced a sentence of life in prison and been required to serve a minimum of 25 years. Pistorius also faces years in jail if found guilty of murder without pre-planning, or of negligent killing. Pistorius could also be acquitted if Masipa believes he made a tragic error.

Masipa told Pistorius he could remain seated on a wooden bench in the South African courtroom until she asked him to stand, and then proceeded to explain her assessment of the testimonies of some of the 37 witnesses who testified at the double-amputee’s dramatic trial. This verdict phase was expected to take hours and possibly even two days to fully read out.

Casting doubt on witness accounts of hearing a woman’s screams, Masipa said “none of the witnesses had ever heard the accused cry or scream, let alone when he was anxious,” apparently acknowledging the possibility that the defense argument that Pistorius had been screaming in a high-pitched voice.

“That in itself poses a challenge,” Masipa said of the fact that neighbors had never previously heard Pistorius scream and had no “model” to compare with the screams they heard on the night of Steenkamp’s death.

At one point, Masipa said: “I continue to explain why most witnesses got their facts wrong.”

That evidence, the judge said, doesn’t prove anything.

“Normal relationships are dynamic and unpredictable most of the time, while human beings are fickle,” she said.

Pistorius has said he mistakenly shot Steenkamp through the closed door of a toilet cubicle, thinking there was an intruder in his home and pleaded not guilty to murder. The prosecution alleges the athlete intentionally killed her after a loud quarrel, which was heard by neighbors.

A key part of the prosecution’s case was its assertion that Steenkamp screamed during a late-night alleged fight with Pistorius before he killed her. But Masipa said some of those witnesses who testified to hearing a woman scream that night were “genuinely mistaken in what they heard, as the chronology will show.”

That appeared to indicate that the defense had succeeded in raising doubts that Steenkamp ever screamed. The defense says the screaming was instead Pistorius, who was traumatized and desperately calling for help in a high-pitched voice after realizing he had shot Steenkamp in error.

Masipa also cited testimony of an acoustics expert called by the defense, saying it cast “serious doubt” on whether witnesses who were hundreds of yards away in their homes — as some state witnesses were — could have differentiated between the screams of a man or a woman.

Earlier, Masipa began by outlining in detail the four charges against the Olympic runner: Murder, two counts of unlawfully firing a gun in a public place in unrelated incidents and one count of illegal possession of ammunition.

Pistorius sat looking straight ahead in the direction of the judge as she was explaining her upcoming decision from documents on a stand in front of her. Her two legal aides sat on either side.

Before the session began, Pistorius hugged his brother Carl, who was seated in a wheelchair because of injuries suffered in a recent car crash.

The parents of Steenkamp, the 29-year-old model fatally shot by Pistorius, were also in the packed gallery. Other members of Pistorius’ family, including his father Henke, sat behind him.

If Pistorius is convicted on any charge, the case will likely be postponed until a later sentencing hearing.

There were many journalists at the courthouse, where the sensational trial has unfolded over the last six months.

The Associated Press contributed to this report.

Choosing Faith over Fear This 9/11

These days, there are plenty of reasons to fear. Our world seems to be in a continuous state of war and crisis. The jobs market is dismal, natural disasters wreak havoc, and stories of crime dominate the headlines. As Christians, we know that fear should have no place in our lives, but how can we ignore what’s going on around us?

Basically, there are two paths you can walk: faith or fear. It’s impossible to simultaneously trust God and not trust God. Another way of saying this is that you cannot both obey and disobey Him–partial obedience is disobedience. So, which road are you traveling?

Some people who read the Bible and believe in God nevertheless choose to live with fear. Seeing others experience hardship, they start wondering if it could happen to them: Someone at my office lost his job; will I be next? Someone died in an accident–I could die too. But this kind of “logic” places your circumstances above your relationship to God.

If Satan can get you to think like this, he has won the battle for your mind. But when you focus on God rather than your circumstances, whatever the situation is, you win.  The Bible tells us, “God has not given us a spirit of timidity, but of power and love and discipline” (2 Tim. 1:7).

Our heavenly Father understands our disappointment, suffering, pain, fear, and doubt. He is always there to encourage our hearts and help us understand that He’s sufficient for all of our needs. When I accepted this as an absolute truth in my life, I found that my worrying stopped,

Used with permission from In Touch Ministries, Inc. © 2009 All Rights Reserved.