The Best Kept Secret of the 21st Century: The Ongoing Genocide In SA, Kids Suffer World Sees Nothing 2014 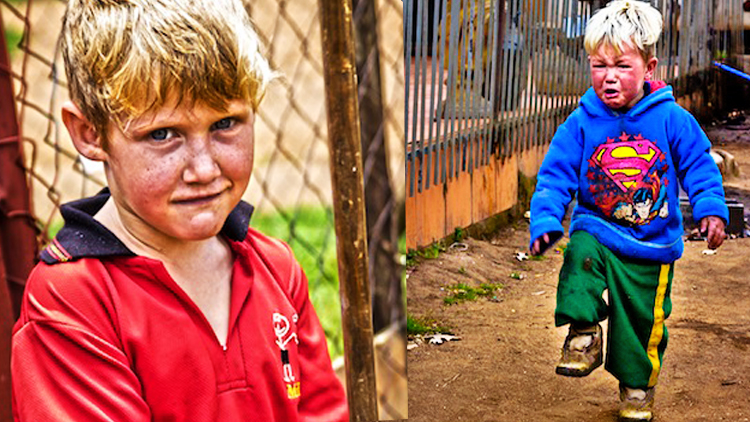 Why Do The Leaders of the world and the main news agencies ignore the white genocide in South Africa? –WHISNews21

The whole world can talk about Oscar “The Blade Runner” but chose to ignore the biggest news story of the 21 Century. Below you will find another one of 1000’s of untold stories that are hidden from the world press.

PLEASE NOTE: THIS IS ONLY ONE OF HUNDREDS OF WHITE SQUATTER CAMPS IN SOUTH AFRICA

Sheepishly we park our conspicuously shiny car at the entrance of the white squatter camp in Krugersdorp and head for Irene’s shack – “head-office” for this overlooked community. It’s our second trip to the informal settlement and this time we come bearing potatoes and awkward smiles. Irene, with her bleached hair and hardened soul, fails to flinch at our discomfort or acknowledge our downcast eyes. Instead she beckons us into her makeshift home to observe her newly assembled shrine, dedicated to the athletic achievements of her talented 14-year-old daughter. Excitedly she tells us of the possible opportunity for her to compete overseas – no small feat considering that her training regime consists of running barefoot around the desolate park she calls home.

The informal settlement in the corner of Coronation Park is currently home to 248 poor white South Africans (77 of whom are children). Shacks, tents, caravans and containers huddle close to one another on the grassy outskirts of this government-owned land.

Irene gushes like a proud mother for a couple of minutes before getting down to business. She knows what we are here for even though our ‘bribe’ came in the form of well-meaning carbohydrates. The people at the squatter camp have been exposed to their fair share of media types and journos, all looking for their slice of the story or the award-winning shot. The wary and accusing eyes that follow our movements around the park tell stories of exploitation and mistrust, an unavoidable by-product of being used as mannequins in the storefront of white poverty.

Accompanied by a peculiar array of stray dogs and cats, we stroll around the mishmash of makeshift housing trying (but probably failing) not to appear too much like tourists in an urban zoo. As we pass the concrete block that houses the bathrooms – the last remnants of this one-time caravan park – a putrid stench engulfs me. I feel sick to my stomach and hold my breath for fear of being infected by this filth, immediately feeling guilty for doing so.

Strewn around the camp are relics of past lives – broken down cars, old paintings, chipped ornaments and three-legged chairs. Many of the squatters once lived in comfortable homes and held stable jobs, but the lethal combination of economic crisis and affirmative action has left them retrenched and unemployable. Grumblings of reverse-apartheid and marginalised minorities waft around the park like a bad smell. Of course, there is also the typical cross section of miscreants present; the drug-addicts and alcoholics, the mentally ill and deranged, the strays and misfits who have nowhere else to go.

Our previous visit to Coronation Park was in the middle of winter, when the bitter cold, lack of electricity and running water and inevitable outbreaks of disease threatened the well-being of many of the families. Donkey boilers and semi-regular wood donations were their only saving grace – small pleasures in these tough times. As the wood truck pulled up a mass commotion erupted from the community. People emerged from out of the woodwork to claim their stake in the flammable offerings. A frenzy began, which lasted for about 20 minutes, until all that was left was an empty flatbed and sadness.

Summer at the squatter camp seems somewhat more bearable, but brings with it a whole new set of difficulties. A resident summons us over to show us a gaping hole in her tent caused by a particularly violent hailstorm. Just one of the countless victims of the icy damage and destruction – Mother Nature knows no mercy. Yet on this particular day, the sun is shining, the grass is green and the children (despite being somewhat dirty) are playing happily among themselves outside the camp’s improvised crèche.

My feelings of optimism are shattered by woeful tales of suicide attempts, drug addiction, violence and thievery, as told by a teary middle-aged woman whose husband had recently deserted her. “This is not a good place for anyone. It is not safe here,” she said. However, a couple of shacks down and things don’t seem as dire – vegetable gardens and double-story shacks speak of relentless hope and stubborn pride.

As South Africans, we know something about poverty. We’ve seen the upturned faces at traffic lights and we’ve heard the desperate pleas. Why is it then that talk of neediness and hardship too often seems married to a particular race? Is empathy reserved for a select few? Would I be writing this piece about black squatters? Or are they no longer newsworthy? Do some people deserve to suffer? In spite of our opinions, and all the questions, the truth of the matter remains – unbeknown to most and tucked away in a grimy corner of Krugersdorp lives a group of forgotten people, struggling to survive in hungry exile.

Article By By Laura Oneale

Like Loading...
« Marty’s Prayer Line for Yesterday Today and Tomorrow
Be Inspired By Rhon This Wednesday Morning »

101 thoughts on “The Best Kept Secret of the 21st Century: The Ongoing Genocide In SA, Kids Suffer World Sees Nothing 2014”