Jack Blanchard Column: From Our Distant Past

FROM OUR DISTANT PAST.

I searched through our old recordings
and found something special…
a scratched up acetate disc from our distant past.When Misty Morgan and I first played music together,
we were playing at the Downtowner Bar in Key West FL,
in the early 1960s,
and somebody in the audience caught this minute of our music
on a tape recorder, probably an old Webcor.When we got back to Miami
we took the little reel of tape to a studio
to have it put on an acetate disc to play on our hi-fi at home.
For you younger readers:
A “hi-fi” was the I-pod of the day,
only made of rocks.

If there was any writing on the disc label
it has long been faded away,
and the old recording has a lot of scratches
and a skip in the middle.
I haven’t attempted to get the surface noise out. It keeps it real.
Acetate discs don’t usually last one year, much less over forty.

The third musician in our trio was guitarist Doug Tarrant.
We played a lot of kinds of music,
including rock & roll, jazz, standards, and current hits.
Misty and I hadn’t even thought of singing duets on stage yet.

The year that we first played at the Downtowner in Key West,
Misty was playing an instrument that is now extinct
and out of memory.
The Lowrey Organo was an attachment
that you hooked up to a piano,
and turned it into an organ with left-hand bass.
We rented them from other musicians until we could buy our own.

We were singing into CB radio microphones,
because that’s all we could afford.
Even so. it sounded okay… like an old fashioned telephone.

Doug was playing his original Les Paul model guitar,
and getting the latest techno sound with an Echofonic,
probably the first tape echo device ever marketed for live performance.
We were pretty hip for the Dark Ages.

We loved the music of Les Paul and Mary Ford, and on this clip
we are doing “The World is Waiting for the Sunrise”.
It’s a bit of our musical past…
a minute of our life almost forgotten.
Terrible audio quality, but a great bit of our history

Thank you for your prayers for me. I am feeling better today and I appreciate your concerns.

Continued prayers for the missing plane in Malaysia.  Please pray that the Good Lord will watch over all families of those who were on the plane, and that the authorities will find the plane and give answers and possible closure to their lives.

Hi folks, yes i think Jerry and his wife could use some prayers, I talked to him about two weeks ago and his wife Barbara had just had open heart surgery, Jerry was slated to have surgery also for a Hernia but had to postpone it because of his wife. They are probably  at their sons house recovering. Hope all is coming along for them.  thanks folks for your little notes of encouragement, God bless, George Longard

Thanks for update George, I have been concerned not to hear from him, and now I know why.  I will send this out worldwide so his many friends can pray for Jerry Mac’s wife Barbara, and for Jerry Mac.

All receiving this email sounds like Barbara and Jerry Mac sure could use your prayers as soon as possible.  Thanks Rhon

Prayer for the Morning

Father, as I face this new day, let me be aware of the work you have done for me as I slept.

I praise you that your loving care never slumbers, but has been with me

While I was least aware of it; and that you renew me and the whole world, fresh every day,

Preparing your plans for me.

I pray that I may seek your will this day, your plan for my life, and carry out your plan in my every action. I lay my hopes and fears on an altar before you, that your Holy Spirit may guide my hopes

Toward the light of your holiness, and may quiet my fears with the knowledge of your infinite peace,

In total confidence that your grace will save me from the evils of this world. In Jesus’ name I pray.

3.5m In Danger As Dam Faces Collapse no Maintenance

Recent Picture after years of low or no maintenance

Cape Town – At least 3.5 million people in Zimbabwe, Malawi, Mozambique and Zambia are reportedly in danger amid revelations that the Kariba Dam wall has developed “serious structural weaknesses” and is on the verge of collapsing.

According to News Day, Zambian Finance Ministry permanent secretary Felix Nkulukusa said there was need for Zimbabwe and Zambia to raise $250m to avert a major humanitarian and economic crisis.

The Zambezi River Authority (ZRA) said the dam wall suffered from alkali-aggregate reaction, which induces swelling within the concrete mass. Nkulukusa said another problem was caused by the spillway that was no longer opening and closing automatically to maintain the required water levels.

The report said that while the Zambian government acknowledged the gravity of the situation, its Zimbabwean counterparts were attempting to downplay it.

Nkulukusa told the Zambia Daily Mail that the dam wall risked being washed away if nothing was done in the next three years.

“An unstable foundation can wash away the dam – a potential catastrophe for the 3.5 million people along the Zambezi River mainly in Mozambique and Malawi,” Nkulukuswa was quoted as saying.

Zimbabwe’s Environment, Water and Climate minister Saviour Kasukuwere, however, said he was not aware of the impending disaster, adding that the dam wall was already going through some repairs.

Zimbabwe and Zambia largely depend on hydro-electric power from Kariba Dam, while Cahora Bassa in Mozambique supplies 40% of the power demands in the Southern Africa region. 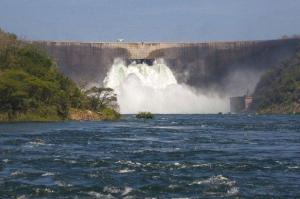 A disaster waiting to happen

Cahora Bassa Hydro-power plant in Mozambique would be destroyed if the dam wall is washed away, Nkulukusa said.

The possible collapse of the wall would pose a threat to power supply not only in Zimbabwe and Zambia, but the whole region, the report said.

Thousands of people in Zimbabwe were last month evacuated after torrential rains caused the partial collapse of the Tokwe-Mukosi damin the Masvingo area.

The dam which was still under construction by an Italian company was being developed for water storage and irrigation purposes.

Alicia: NO MAINTENANCE…ONLY ON MUGABE’S PALACE. Rest of the money goes for his health trips to Hongkong and of course Grace’s shopping list.

Buzzbar: Please help them fix it. We don’t need another 4 million Zimbabweans in our country because theirs in now truly buggered…

Wolf Pack Hunter; Typical African disaster about to happen, No maintenance, no proper engineers, would not listen… sounds like Eskdom and other SA government departments. If that dam wall collapses, there will be hundred of thousands of deaths, Economic disruption that will make bob’s seizing white farmers land seem like a Sunday afternoon picnic. The long term effect are unimaginable, and all because we know why……”We don’t want the whites here” attitude. We can stuff it up and blame the whites for it.

Brett Sergay: My understanding is that the concrete aggregate is one of the problems, but not the only one. The plunge pool below the wall has been allowed to erode enormously – to the extent that it is now starting to undermine the wall itself. Also, vital steel infrastructure has been allowed to rust and erode. Lets face it, Zimbabwe is not a model on how to maintain vital infrastructure, nor is it a model on a thriving country.

Nick: This would be a good example for the producers of the television show “Life After People” where they detail what happens to things should man disappear off the face of the planet overnight. In this case they can call it “Life After The White Man”

NB: We apologize for running the show 30 minutes late their was a glitch in cyberspace probably caused by me

Debuts on WHIR Wildhorse Internet Radio @ 11am this morning

Just click on the radio icon below to listen to this wonderful Music Carousel Radio show hosted by International Singing sensation “CLIFF AYERS” out of Nashville Tennessee. 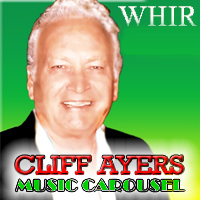 14. Treasure Of Your Love – Anthony Pace

17. Everything is Love – Carl Sabo

Hope you will join Cliff Ayers in a few moments with his very popular Music Carousel Radio Show on WHIR Wildhorse Internet Radio.

“Off The Cuff News” at 10am CST this morning.  It will be a rerun of a few of Marty’s previous shows as he is a little under the weather and was not able to get the news done for us this morning.  I know a lot of you will be disappointed but I feel confident that Marty will be back next week with a bumper “Off The Cuff News” show for us die-hard fans. Hope you will tune in, as I put together a full hour of archived news from Marty and, well it is now part of history and just maybe you will hear something you may have missed previously.

Click Radio banner below to tune in, thank you

Be Inspired By Rhon Every Saturday Morning

Remember Me on your bed; think of Me through the watches of the night. When you are wakeful during the night, thoughts can fly at you from all directions. Unless you take charge of them, you are likely to become anxious. Your best strategy is to think about Me during your night watches. Start communicating with Me about whatever is on your mind. Cast all your anxiety on Me because I care for you. I am taking care of you! This makes it possible for you to relax and rejoice in the shadow of My wings.

When you remember Me during the night, think about who I really am. Ponder My perfections: My Love, Joy, and Peace. Rejoice in My majesty, wisdom, grace, and mercy. Find comfort in My names: Shepherd, Savior, Immanuel, Prince of Peace. Be awed by My Power and Glory, for I am King of kings and Lord of lords. Thus you worship Me and enjoy My Presence. These thoughts of Me will clear your mind-helping you see things from My perspective-and refresh your entire being.

“On my bed I remember you; I think of you through the watches of the night. -Psalm 63:6”

Because You have been my help, therefore in the shadow of Your wings I will rejoice. -Psalm 63:7 nkjv

Fight the good fight of the faith. Take hold of the eternal life to which you were called.�.�.�. I charge you to keep this command without spot or blame until the appearing of our Lord Jesus Christ, which God will bring about in his own time-God, the blessed and only Ruler, the King of kings and Lord of lords, who alone is immortal and who lives in unapproachable light, whom no one has seen or can see. To him be honor and might forever. -1 Timothy 6:12-16