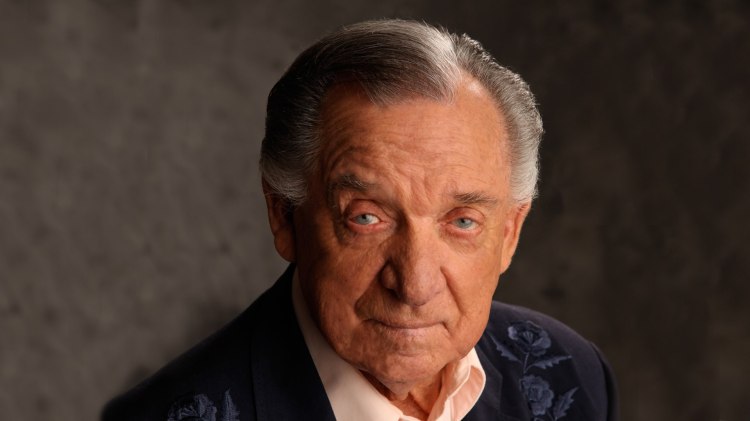 Produced by Grammy award winning hit maker and friend Fred Foster, Ray Price’s final sessions, Beauty Is…, will hit shelves on April 15th via AmeriMonte Records. Available at Wal-Mart, Cracker Barrel and online retailers, the album highlights the timeless, signature string and shuffle sound of Ray Price featuring duets with Vince Gill and Martina McBride.
“He called me in 2012 and said, ‘I think I have one album left in me; I’m not well, you know,’” Foster recounts. “He said, ‘I want to do one last one, and I want you to do it with me.’ The whole time we were working together, his state of mind was always really good. You would never know how sick he was to talk to him. What a classy guy.”
The full length album will be released on April 15th, but a three song EP taken from the album will be available digitally on March 16th featuring Beauty Lies in the Eyes of the Beholder (with Vince Gill), This Thing of Ours and I Wish I Was 18 Again. Beginning on March 18th, fans can preorder the full album on iTunes.
“We are extremely delighted and honored to announce the release of Beauty Is… the final sessions from Ray Price on AmeriMonte,” says AmeriMonte Records President Steve Popovich, Jr. “His fans are going to be amazed as this album falls nothing short of a true masterpiece and you’ll understand why he believed this to be of his best work. He captured true perfection and left a huge void not only in Country music, but in music in general. There will only be one Ray Price and through Beauty Is.. his legacy will live on forever.”
The music industry is already showing their enthusiastic support for Ray and his legacy.
“After one listen of this remarkable album, you will note that Price’s flawless phrasing, vocal resonance and burnished warmth of tone create a glow that lingers long after the final notes have sounded,” says Music Row’s Robert K. Oermann.
“In the 1950s, Ray Price gave new drive to country music,” says The Tennessean’s Peter Cooper. “In the 1960s, he offered elegance and sophistication. For his final act, he gave us reflection. Beauty Is… is the sound of a man in full, looking back on the life and love that fulfilled him. It is the most graceful of exits.”
“A fitting encore for those of us who want “MORE” from the Tony Bennett of Country Music,” says Grammy award winning icon Lynn Anderson. “Sensitively produced by Fred Foster, timeless songs sung by the best.  Among the beautiful string-laden ballads is an old-timey shuffle with a steel guitar, a fiddle and perfectly understated harmony.  Classic Country. Thanks For The Good Times, Ray.”
“Over the past year, while making this album, Ray’s excitement about this project was infectious” says SiriusXM Willie’s Roadhouse on-air talent Dallas Wayne. “He would call and play the mixes over the phone and let me tell you, Ray Price singing over a cell phone, sounds better than anything heard on radio today! You just knew this album was gonna be something special. And it is. He left us with a singing lesson, just like always. Beauty Is… is not only the name of this brilliant recording, Beauty is Ray Price.”
Foster brought in the album’s new songs and suggested the inspirational I Believe. Price selected songs from two fellow Texas treasures and Country Music Hall of Fame members Cindy Walker (Until Then) and Willie Nelson (It Will Always Be). He also wished to sing Stephen Foster’s timeless Beautiful Dreamer. Both men agreed on Among My Souvenirs and I Wish I Was 18 Again. Janie Price, wife, chose the 1957 Vic Damone pop hit An Affair to Remember, the theme song from the Cary Grant/Deborah Kerr film.
“Offstage, he was just the guy I love,” says Janie Price. “When that red light went on in the studio, or when he stepped onto the stage and they handed him that microphone, something happened. It was a higher power. This transformation took place in him. He turned into RAY PRICE.”
Beauty Is… – Track Listing
###
For more information, to request review copies or to schedule interviews regarding the project, contact Mark Logsdon of PLA Media at (615) 327-0100(615) 327-0100 or mark.logsdon@plamedia.com.
For radio promotion, contact the following:
Contact: Nancy Tunick
Grassroots Promotion
Phone: (615) 353-2778(615) 353-2778
Email: nancy@grassrootspromotion.com
Contact: Gerrie McDowell,
GerriecoTexas.com
Phone: (972) 800-0004(972) 800-0004

Article sent in by Keith Bradford