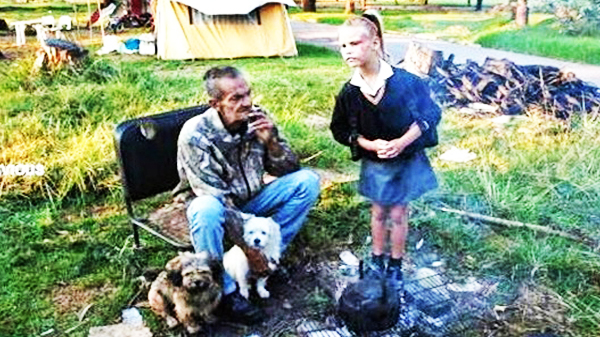 The Afrikaner Journal warns of a critical human crisis

Developing in many suburbs of Pretoria

Amongst tens of thousands of working-class Boers and Afrikaners.

Their children are dying of malnutrition and disease.

“Some of these children won’t live until the summer…

“Afrikaans children are dying of malnutrition and disease because of the ANC government’s Nazi*-type  laws barring ‘whites’ from the South African job market – only because they are whites,” the journal noted. “These parents we visited and delivered food-aid and medicines to, are helplessly watching their children being killed by the black-racist laws of the ruling ANC-party of South Africa.

“Some of the children who were given food-aid on July 7 2012 at the WesMoot (Western Suburbs) of Pretoria won’t live to see the summer: The Afrikaner Journal reports: “I’ve witnessed signs of disease such as respiratory diseases like asthma and pneumonia, as well as untreated infections, mouth ulcers and diarrhea.

“The food arrived just in time: the Afrikaners had nothing left to eat…

DONATE VIA PAYPAL ON:

Above: Destitute Boer Mom Elsie Brits and her little girl Elmarie were

given medication for the little one and food-aid donated by the Afrikaans singer Sunette Bridges.

ANC Mayor of Johannesburg Parks Tau: ‘There will be no work for whites’

Notes: *Nüremberg laws of the Nazis of Germany: comparison to the ANC-regime’s broad-based black economic empowerment laws – both regimes made laws barring whites from the job market, from land-ownership rights, from business-ownership rights and even from rights to access government social-welfare structures: the poor whites are even denied government food-aid in South Africa.

Nüremberg laws: ‘There was a rapid growth in German legislation directed at Jews and other groups, such as the Law for the Restoration of the Professional Civil Service which banned “non-Aryans” and political opponents of the Nazis, from the civil-service, all civilian jobs, all rights to own land, homes or businesses, all rights to be educated in German educational institutes; Jews were denied access to public places and were not allowed to work as medical health-care workers, or educators of any kind.

BlackEconomicEmpowerment laws of the ANC-regime in South Africa:

White women and disabled whites were barred from the public and private-sector job market in South Africa by the Broad-Based Black Economic Empowerment Amendment Act of 2011, introduced by leading SA Communist Rob Davies – the Trade & Industries Minister:  all the URL links to the Act are published below. For comparison, the Nazi’s Nüremberg laws can also be consulted at http://en.wikipedia.org/wiki/Nurenberg_Laws.

Above: the broad-based black economic empowerment laws were originated by a leading member of the SA Communist Party’s politbureau and central committee, the murky SA Minister of Trade and Industry, Rob Davies of the United Kingdom. Very little is known about his activities before his arrival in South Africa in 1990 other than that he was ‘in Mozambique’ and was divorced.

leading member of SA Communist Party central committee and PolitBureau and: Honours degree in Economics. Masters degree in International Relations from the University of South Hampton,United Kingdom (UK). Doctorate degree in Political Studies from the University of Sussex. Member of SA Parliament since 1994.     Member of both the African National Congress (ANC) and South African Communist Party (SACP) in Mozambique.

Returned to South Africa in August 1990 and worked in the Department of Economic Policy at ANC Head Office in Johannesburg.     Professor and Co-Director of Centre for Southern African Studies at University of the Western Cape (UWC).

He undertook policy research for ANC and Southern African Development Community (SADC). Member of SA Ministerial delegation WorldTradeOrganization Seattle (1999), Doha (2001), Cancun (2003) and Hong Kong (2005). Member of Joint Parliamentary Assembly bureau and ACP Co-Vice President of the Human Rights.     Member of Eminent Persons Group put in place by the Global Coalition for Africa (2003). Member of both Central Committee and Political Bureau of the SACP.

Where to now, and what is there to do? For most there is nowhere to go and no place to hide and no help on the way. Many more will die and many more will give up. One thing white South Africans now very well, is that very few people care if they all die here on the edge of Africa, a place they used to be able to call home, sad but true.