Nashville, Tenn. (October 8, 2012) – The Oak Ridge Boys are making ready to mark 40 years of their phenomenal musical journey and international success.  They’ll be kicking off The Oak Ridge Boys 40th Anniversary Tour on January 19 & 20, 2013 at the historic Grand 1894 Opera House in Galveston, Texas. There’ll be a commemorative CD that features 4 decades of hits and collaborations, plus a network television special. Fans can be on the lookout for a commemorative poster and keepsake memorabilia. Venues across the U.S. and Canada are teaming up as hosts for the Grammy-winning group’s milestone celebration and what’s sure to be a packed performance schedule.  Show stops for the 40th Anniversary Tour will include John Ascuaga’s Nugget, Jamboree in the Hills, and the Kentucky State Fair. Special events will take place for all concerts at the Oak Ridge Boys Theatre in Branson, including America by Rail’s special excursions and train stops at the venue during the tour. Other highlights will include The Oak Ridge Boys Rally at Sea.  The luxury cruise will set sail from February 28-March 4, 2013 with two performances by the group along with a meet & greet session, reception and much more. For more information, please visit: www.oakridgeboys.com.
Photo credit: Mike Payne

ALL THE NEWS FROM JIM ROSE REMEMBERS RADIO October 08, 2012

In November 1969, R.B. Greaves’ out-of-the-box hit Take a Letter Maria grand slams #2 on Billboard with sales of more than a million copies but the 5th Dimension’s Wedding Bell Blues cheats the song out of #1.

Ronald Bertram Aloysius Greaves III is born on November 28, 1944 on a U.S. Air Force base in Georgetown, Guyana. He grows up on a Seminole reservation in California.

The Los Angeles County Coroner says R.B. Greaves, who is a nephew of the late Soul singer Sam Cooke, dies at 68 of prostate cancer on Thursday, September 27, 2012. His son Shiloh is his survivor.

SCOTT SHANNON AND OLDIES KNOCKED OUT IN CHICAGO

A big shake-up at WLS FM in Chicago, IL leaves legendary multiple Billboard Broadcaster of the Year Award winner Scott Shannon, who places WLS FM back on top with his The True Oldies Channel, out on a plank.

Scott is one of the most recognized and honored deejays on the planet.

In an interview Scott sighs: Far too often, in the world of radio, our favorite personalities are taken away from us without the chance to say goodbye…when you’re gone, you’re gone, instantly old news in favor of the new team in place. Jan Jeffries, WLS FM Program Director, tells Robert Feder, radio media columnist, that he is moving the station away from the oldies format, stating that the word won’t even be used on the air anymore.

What do The Beverly Hillbillies and a Texas Rock and Roll band have in common?

The answer appears way below.

ROBERT MILLER (Detroit/Plymouth, MI) Subject: Debate. Jim, As a university professor in communication (speech, persuasion, etc.) I have to say Romney did a better job in the first debate. I am a liberal but have to give credit where credit is do. The President apparently didn’t prepare as well as Romney and m(a)y have overestimated his challenger’s ability. I suspect the President will get in the game by debate #2. He needs to “splain” things to folks in simple terms. Otherwise he needs to have Bill Clinton as a proxy.

J.R. KENNEDY (Houston, TX) Jim…still recovering from thyroid cancer that took out one of my vocal cords. Waiting on an implant that may fix me up. So wishing and waiting – should know in the next month. J R

LESLIE WAYNE HODGES (Marshall, TX) Hi, One striking moment during the debate is when Romney looks Lehrer in the eye and says that he will eliminate federal funding for PBS. I was proud. Don’t you agree that (t)his sounded like something I would have said and done? Leslie Wayne Hodges

CONTACT JRRR WITH TIPS! Do you know something that we should know? We want to hear from you. Send your radio tips and stories to Rosekkkj@earthlink.net.

DAVID FAULKNER (Dallas, TX) Subject: Meteorologist Bob Goosmann Now At KRLD. Greetings Jim & Lacy, Meteorologist Bob Goosmann, formerly of CW 33 & CBS 11 TV in DFW is now at KRLD radio. From KRLD’s Facebook page: ‘Newsradio 1080 KRLD is proud to welcome Bob Goosmann as our new staff meteorologist. Bob replaces Krista Villareal who was our staff meteorologist for the past couple of years. We appreciate all that Krista did for us while she was part of our team. This change was made with many factors in mind. Newsradio 1080 KRLD is focused on being THE weather authority in Dallas/Fort Worth.’ Best, David Faulkner 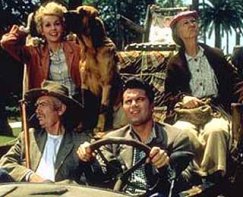 TRIVIA ANSWER: An episode of The Beverly Hillbillies where Granny yells Hot smoke and sassafras, Jethro, can’t you do anything right? is the inspiration for the title to San Antonio, TX Psychedelic Rock band Bubble Puppy’s 1969 hit Hot Smoke and Sasafrass that reaches #14 on Billboard. In 1966, Rod Prince and Roy Cox form Bubble Puppy in The Alamo City. Both previously are members of Rock group New Seeds. In their quest to form a top gun rock band with dual lead guitars, which is a staple of Southern Rock but unknown in the Psychedelic music arena, Prince and Cox enlist Austin, TX gymnast Todd Potter as saxophone player and guitarist. When they add Danny Segovia and Clayton Pulley, Bubble Puppy’s line up is complete. The name Bubble Puppy comes from a fictitious children’s game in Aldous Huxley’s Brave New World, Centrifugal Bumble-Puppy. In spring 1967, Bubble Puppy relocates to Austin, TX and signs with Houston-based International Artists, which is home to Rock bands 13th Floor Elevators and the Red Krayola.

JOE FORD (Houston, TX)Subject: WHISNews21 Welcomes Jim Rose Latest News « WHISNews21 – 2. Jim, I have found over the years that if you keep going long enough, things will finally break…good OR bad! In your case, I hope it’s good because you deserve it. Your dedication to the business that consumed most of our lives, is admirable. Keep on truckin’ buddy! Joe

MIKE SHANNON (Dallas-Mesquite, TX) Subject: posted in Texas Radio Hall of Fame. Hey radio folks…we’re just SIX WEEKS away from the Texas Radio Hall of Fame’s 2012 induction ceremony! Don’t risk waiting ’til the last minute to order your tickets. And don’t forget that we’ll also be inducting our late friend and TRHoF creator LARRY SHANNON that day…so you don’t want to miss out. The premier Texas radio event of the year is coming up Saturday, Nov 10, in San Antonio. Scroll down this page for quick and easy links to Paypal, and for more venue information. See you there! (www.KNUS99.com)

FOGHORN LEGHORN [1950s Looney Tunes cartoons] This is gonna cause more confusion than a mouse in a burlesque show!

Petes Weekly: Chatting To The CEO Of You, Inc…

Chatting To The CEO Of You, Inc…

This morning, the CEO of You, Inc took me to task. Frankly, it seems that I have been a little lax these past weeks. I blame influenza.
That’s one of the problems with being a very small business. The CEO can call you at any time of day or night. In my case, his preferred time is while I’m shaving first thing in the morning.
CEO: “You have been taking it very easy for the past six weeks! I don’t know if you recall that huge tax bill that we are facing?”
ME: “I’ve had the worst flu I experienced in years. And don’t blame me because the accountant forgot to tell you that this year you must pay last year’s tax and this year’s tax because the Norwegian government has changed the rules.”
CEO: “We’ll come back to the tax bill in a moment. For now, is there any reason why you won’t pick up the phone at 8:30 a.m. to make some sales calls?”
ME: “Yes, now that you ask. Who want to wants to be hounded by a salesman on a Monday morning?”
CEO: “I agree that nobody wants to be bugged by salesman, at any time. But, I am willing to bet that most people would be happy to know how to get more sales this week.”
ME: “Maybe, but you’ve got to get the timing right.”
CEO: “Maybe, but given your performance these past six weeks, I think I can tell you honestly that not making any phone calls at all is a little worse than making just one at a bad time.”
ME: “Ouch! I am finding it tough to listen to you while gouging holes in my face.”
CEO: “I can feel your pain, but you and I both know that it doesn’t matter how good our product is, or our service is. What matters is that other people know, and that they understand how it helps their business. So, Peter, what are you going to do this week to get sales?”
I’m not going to bore you with more detail of me talking to myself in the mirror each morning.
But, each of us small business owners faces this same question each day. Our success depends only on reaching out to enough people who will derive value from what we sell. There is nothing else anywhere nearly as crucial.
This was emphasised to me when a request from our Sales Motor site arrived over the weekend asking for help selling art. Sales Motor cannot help in that instance. But, a little training in direct marketing is going to change that artist’s life. Just as it has changed mine and allowed me to indulge my wanderlust.
(Which reminds me, I have six seats left at my direct marketing seminar in Sandton, 10 in Cape Town, and five in Durban. These three seminars are during the evenings of the week starting October 15. You can get exact details here.)
While we are talking about artists, if you have an iPad, may I suggest you look at a superb app called Paper? It makes even my doodling and sketching readable and, dare I say, enticing. It means that I can capture an exact thought without wasting hours trolling the web for a picture that does not quite describe what I want.
And now that we are on the subject of software, if you use Windows, may I suggest checking out a delightful free application called Dexpot which I find extremely useful, especially when using a laptop? After using Apple for ages, I’m used to having multiple desktops. (All my research happens in one, e-mail in another, accounting in the third, and so on.) This simple application offers the same facility within Windows.
On that note, have a chat with yourself tomorrow morning while you are shaving. If you are a girl, you might prefer to have that chat as you apply your face, rather than while removing the hair from it.
Have an outstanding week. I know mine will be because I will be en route to South Africa late next week. I can’t wait
All the best